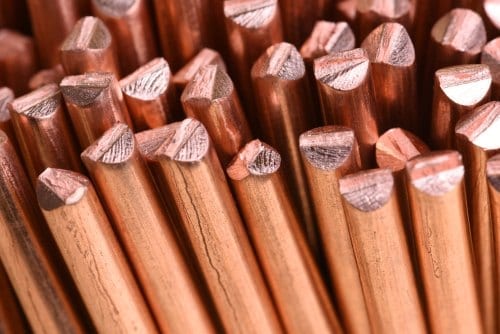 Copper demand in the electric vehicle (EV) market is driving fears of a supply deficit, which could present an opportunity for resource companies looking to power the green energy revolution.

Copper has been an essential material in nearly every piece of electrical equipment and infrastructure built since the earliest days of human-harnessed electricity. With electric renewable energy solutions taking on an increasingly important role in the global energy landscape, we could need even more of the red metal to continue the green energy revolution. From the EVs that are set to take over the global automotive industry to next-generation infrastructure like wind turbines and solar panels, the renewable energy devices of the future could contain more copper than ever used before. This translates to built-in demand for copper, which could result in a bright future for producers as the green energy market materializes.

Analysts have been heralding the arrival of the renewable energy revolution for some time, and in recent years we’ve started to see hard movement towards renewables. According to Bloomberg New Energy Finance, a total of US$332.1 billion globally was invested in clean energy in 2018, making 2018 the fifth year in a row that saw more than $300 billion in clean energy investments. According to the International Energy Agency, global renewable energy capacity is expected to rise by 46 percent from 2018 to 2023. The number of EVs on the world’s roads is expected to top 25 million vehicles by 2025 according to JP Morgan.

Renewable energy technologies can use up to five times more copper than their conventional counterparts, meaning the rise of green energy initiatives could spark major growth in the global copper market. Global demand reached 23.6 million tons in 2018 and is expected to grow at a 2.6 percent compound annual growth rate to reach nearly 30 million tons by 2027.

By far the greatest contributor to the rise of copper demand is the rapidly expanding EV market. Each EV on the road requires significantly more copper than vehicles with combustion engines. A conventional internal combustion engine-powered vehicle typically contains about 18 to 40 pounds of copper, while a hybrid electric contains 85 pounds and a plug-in hybrid contains 132 pounds. By comparison, a typical battery found in an EV contains a whopping 183 pounds of copper. Stator windings, the stationary wire coils through which an electric motor produces a rotating magnetic field, can be made up of more than a mile each of copper wiring. On top of that, charging stations and other pieces of infrastructure needed to support EVs all require considerable amounts of copper as well.

China remains at the forefront of EV development. China is already the largest EV market in the world by far, and the Chinese state expects one-fifth of all vehicles sold in the country to be EVs by 2025. This unprecedented focus on EV development is largely in response to China’s historic struggles with urban air pollution over the past several decades. As a means of combating carbon emissions, the Chinese government has committed to encouraging and supporting the EV industry with a subsidy of up to 110,000 yuan (about US$16,585) for EV buyers. The state is also offering a financial incentive for manufacturers and investing further in public infrastructure for EVs. As a result, China is now home to six of the world’s 10 largest EV manufacturers. The rise of China’s EV market is driving massive copper demand in the country. In January 2019, Chinese copper imports reached 479,000 thousand tons.

Fears of a looming supply crunch have already set in and both major and junior miners are scrambling for copper sources. The US copper industry, having been in a major lull in recent decades, is waking up, seeing more than US$1.1 billion in investments.

With renewables driving demand for the conductive red metal, copper projects with shorter paths to production could be positioned for a rare opportunity. While massive copper projects like those undertaken by Rio Tinto (NYSE:RIO,ASX:RIO,LSE:RIO) and BHP (NYSE:BHP,ASX:BHP,LSE:BHP) are still years away from gaining regulatory approval and going into production, junior mining firms could be able to bring smaller projects online in time to meet the supply crunch.

Among the junior miners taking full advantage of this opportunity is Copper North Mining (TSXV:COL). The company is looking to address medium-term copper supply shortfalls through the company’s Carmacks copper-gold–silver project in Yukon, which it is transforming into a potential low-cost copper and precious metals producer. The heart of this transformation is a shift from heap leaching, which would recover copper only, to a two-stage agitated tank leaching process, which allows efficient recovery of oxide copper and gold, along with some silver, as detailed in Copper North’s late 2016 preliminary economic assessment. The shift to tank leaching is expected to enable the company to lower the cost of copper cathode production to US$1.08 per pound after precious metals credits. This reduction could position the Carmacks project among other low-cost copper producers.

“Copper, the real green metal, is the foundation for the rapidly developing electric economy, which is driven by the need to reduce greenhouse gas production. Our transformed Carmacks project is perfectly positioned as a low-cost, low-carbon-footprint supplier of copper to feed this new economy,” said CEO Doug Ramsey.

The project economics at Carmacks has been improved considerably when compared to the previous project plan. Copper North is also expanding the copper-gold-silver resource at Carmacks through exploration, with 2015 and 2017 drill programs adding a total of 4.3 million tonnes to the measured and indicated oxide mineral resource, a 35 percent increase that could add another 2.5 years of mine life to the already planned seven-year project. The project is located within 12 kilometers of grid power, which would allow the production of cathode copper using primarily renewable energy — 94 percent came from hydro in 2018 — at a reduced cost. Copper North estimates the project could be through environmental permitting and ready to produce copper and precious metals in about three and a half years.

The electric vehicle market represents a major disruption that spans multiple industries, and nowhere is that more evident than the resource industry. As green initiatives continue to drive demand for EVs and the infrastructure needed to power them, North American copper producers could find themselves in a unique position to serve the growing marketplace.

This article was originally published by the Investing News Network in May 2019.

One response to “The Green Energy Revolution: Driving Copper Demand into the Future”