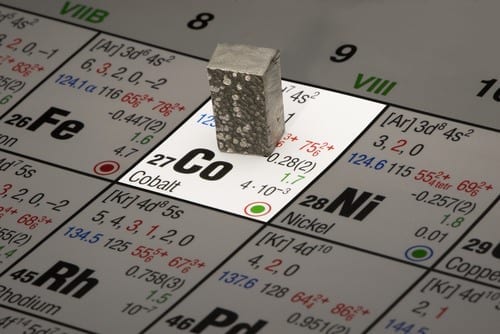 Cobalt production outside of the DRC presents an opportunity for developing ethical sources for the battery metal.

Alongside the surging demand for electric vehicles, the value of cobalt has grown exponentially in recent years and the market is hungry for cobalt production outside of the DRC.

Cobalt is a high demand material for today’s high tech economy, from cell phones to superalloys to electric vehicle (EV) batteries. According to Citibank by 2020, 20 percent of demand for cobalt will come from the EV market as 60 percent of lithium-ion batteries will require cobalt for their cathode formulations.

The fact that most of the world’s global cobalt production comes from the Katanga region in the highly volatile Democratic Republic of Congo (DRC), a hot spot in the global call for conflict-free minerals, poses a challenge for the burgeoning EV industry. Combine that with the DRC government’s tax hikes for mining companies and cobalt giant Glencore’s (LSE:GLEN) on-again, off-again production, and the industry has a dangerous recipe for high-risk, insecure supply lines.

All this turmoil could help push the cobalt price further up in 2019, emphasizing the need for secure supplies of cobalt from safe jurisdictions.

Demand for cobalt as a key metal in lithium-ion batteries is expected to rise dramatically in the next few years as some of the world’s biggest automakers — including Ford (NYSE:F), Volkswagen (ETR:VOW3) and Toyota (NYSE:TM) — begin massive planned roll outs of EV models. By 2050 Morgan Stanley (NYSE:MS) has said it expects EVs to account for at least 47 percent of the estimated total 130 million cars to be sold globally that year. A huge leap from 2016 when EV sales accounted for only 1 percent of total global car sales.

Based on a remarkable demand outlook and supply side insecurities, cobalt prices rose nearly 280 percent in two years to reach US$82,000 per tonne in February 15, 2018. The rising price of cobalt directly impacted battery cell pricing for manufacturers by about 8 to 12 percent.

Spurred by the dramatically rising price of battery materials, some large-scale cell manufacturers have begun to study alternative cathode formulas that use more nickel and less cobalt. However, cobalt is essential for optimal performance and isn’t likely to disappear from lithium-ion battery formulations any time soon. “Cobalt is the element that makes up for the lack of stability of nickel. There isn’t a better element than nickel to increase energy density, and there isn’t a better element than cobalt to make the stuff stable,” according to Umicore Chief Executive Marc Grynberg.

During Q3 2018, LME cobalt metal prices declined almost 23 percent to US$57,500 mostly on market-changing events coming out of China. However, analysts are confident in the fundamentals for cobalt. The consensus is supply and demand dynamics will push the cobalt market into a deficit in the coming years.

“There’s still a lot of upside for cobalt, when we look at electric cars, the demand will double in 2027-2028 and probably quadruple in 2035,” David Anonychuk, managing director of M.Plan International, told the Investing News Network at the October Benchmark Minerals Week conference.

The DRC is home to the world’s largest-known cobalt reserves, and is responsible for about two-thirds of the world cobalt production, pumping out 64,000 MT of cobalt in 2017, far ahead of the world’s second-largest cobalt producer that year, Russia with 5,600 MT. That means the growth of the electric vehicle industry could be dramatically impacted by production-halting events in this one nation.

The DRC has a long, checkered history tarnished by chronic corruption and internal conflict. There are numerous dangerous and poorly managed small artisanal operations, along with serious human rights abuses. While cobalt is not officially a conflict mineral, human rights groups are lobbying for it to receive that designation.

Increasing demand and the global reliance on the DRC for cobalt has the market concerned that a single crisis could cause cobalt prices to surge, seriously impacting growth in the EV industry. “Currently, no alternative country is positioned to increase production to meet global demand if production from the DRC were to be constrained or disrupted,” said the US Geological Survey. The USGS also points out that China controls most of the world’s cobalt refining and relies on the DRC for over 90 percent of its cobalt supply, meaning the international market could face further exposure to market-crippling supply disruptions.

Other supply line problems are materializing at one of the world’s most important cobalt production operations. Katanga Mining (TSX:KAT), controlled by Glencore, suspended cobalt production at the Kamoto mine in early November after finding levels of uranium in the ore that exceed the acceptable levels for export through main African ports.

The Kamoto mine was expected to transform the cobalt market in 2018, reversing the global market from a shortfall to surplus. Producing 6,450 tonnes of cobalt in the first nine months of this year, Kamoto seemed on track to hit Glencore’s 2018 guidance of 11,000 tonnes in a ramp up to 34,000 tonnes in 2019. Katanga plans to build a US$25-million ion exchange system to remove the uranium from its cobalt hydroxide product. The new cobalt processing system is not expected to be operational until mid-2019.

Cobalt production outside of the DRC

Cobalt isn’t a rare metal; in fact, it’s found in a variety of different ores across the world and is currently produced in about a dozen countries. Behind the DRC and Russia, Australia and Canada rank third and fourth largest in global cobalt production.

“We know [DRC cobalt] is a significant portion of supply, but there is potential for other regions. We’ve seen a lot of activity pick up in Canada and the US, so watch that space,” said Anonychuk.

While cobalt production in the United States is quite low (about 650 tonnes in 2017), it does host roughly 1 million tonnes in identified cobalt resources. In May 2018, the USGS and the US Department of the Interior classified important battery metals like lithium, graphite and cobalt as among the 35 minerals most critical to the country’s economy and national security. A recent executive order by President Trump recognizes the need for expanded domestic production of these critical metals. The resulting US critical metals strategy to reduce the nation’s reliance on foreign imports for metals like cobalt is likely to be a boon for junior mining companies with domestic cobalt resources, easing the permitting process for such projects.

Cobalt exploration outside of the DRC

Where’s the opportunity for resource investors in this urgent need to diversify cobalt supply? There are a few junior resource companies with promising exploration and development-stage cobalt projects in the world’s leading mining jurisdictions of Canada, Australia and the United States. This includes eCobalt (TSX:ECS,OTCQX:ECSIF,FWB:ECO) in Idaho; Canada Cobalt Works (TSXV:CCW,OTC Pink:CCWOF,FWB:4T9B) in Canada; and Global Energy Metals (TSXV:GEMC) in Canada and Australia.

To better meet the needs of an evolving battery market, eCobalt is finalizing a new feasibility study to pursue the production of clean cobalt concentrate instead of a cobalt sulphate as outlined in the company’s 2017 feasibility study. Cobalt concentrate is an upstream precursor material for battery cathode production. The company is also preparing for underground mine development to commence in 2019 with a goal of beginning production in late 2020.

Rising demand alongside of increasingly insecure supply lines is likely to pave the way for a return of the powerful price pressure we saw for cobalt in 2017. For the EV revolution to truly take hold, prices for such vehicles will need to be competitive if not cheaper than traditional combustion engine vehicles. To ensure cost parity, EV manufacturers need to keep battery costs low and the best way to accomplish that feat is through reliable sources of supply in safe jurisdictions.

3 responses to “Responsible Mining: The Value of Cobalt Production Outside of the DRC”

Comments are closed.
See our exclusive index of Cobalt companies on the move
EXPLORE