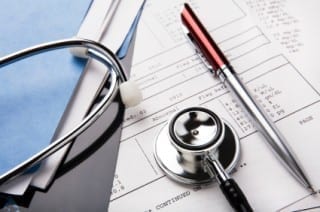 The FDA are collaborating with IBM in order to apply blockchain to healthcare.

According to CryptoCoinsNews, blockchain technology will be researched by the US Food and Drug Administration (FDA), partnering IBM (NYSE:IBM), for the purposes of exchanging health data safely and securely. They will ascertain the ways in which medical data can be shared, from clinical trials, mobile devices and wearables. Initially the spotlight will shine on cancer data.
Cybersecurity is a big issue for a scheme like this. The spectre of February’s hospital records breach at the Hollywood Presbyterian Medical Center will loom large over anything involving the movement of data. Gathering such large volumes of data can be a risky business, as the process is open to the possibility of a hack. The answer, to put minds at rest, could be blockchain.

Other players in the game

Accenture (NYSE:ACN) are one winner of the Department of Health and Human Services (HHS)’ “Use of Blockchain in Health IT and Health-related Research Challenge”, a competition to realize the potential of blockchains in healthcare. This was launched in 2016 and Accenture’s submission, entitled “Blockchain: Securing a New Health Interoperability Experience”, focuses on data integrity.
One example of a company ahead of the trend is Philips (NYSE:PHG). Last year startup Gem partnered with Philips on a blockchain healthcare initiative, called Gem Health. Their stock price responded positively to this news in April and is doing even better now; they most recently finished trading at $30.59 per share.

Give me my free report!
Gem are the title sponsor of the Distributed: Health conference, the inaugural global summit for applications of blockchain technology in healthcare. Chris Kay, Chief Innovation Officer of Humana (NYSE:HUM), was a keynote speaker. HIs presentation emphasized the transformative power of blockchain in healthcare. Also speaking at the Louisville Innovation Summit, Kay says that as “you start to look at networks with a high degree of integrity, where intermediaries don’t need to exist, healthcare is a great place to drive a transformational model”.
Investors should keep an eye out later on in 2017 for IBM’s first findings. The project is two years long so investing in this sphere now could prove a worthy long-term commitment, or investors could bide their time until 2019 has some solid results. It looks as though the tide is moving towards the use of blockchain in the healthcare sector so investing is probably a matter of if, rather than when.
Don’t forget to follow us @INN_Technology for real-time news updates!
Securities Disclosure: I, Emma Harwood, hold no direct investment interest in any company mentioned in this article.