There will be challenges for Fintech in 2017 but the more collaborations the better.

In 2016, financial technologies built acceptance and trust with banks, consumers and financial institutions. When we spoke to industry participants, their predictions suggest this will continue in 2017.

The financial technology market in 2016 was dominated by the rise of blockchain — from finance to pharma, we reported on top blockchain stocks in emerging areas, aside from simply supporting bitcoin. Interestingly, bitcoin has outperformed most major commodities and currencies year-to-date. 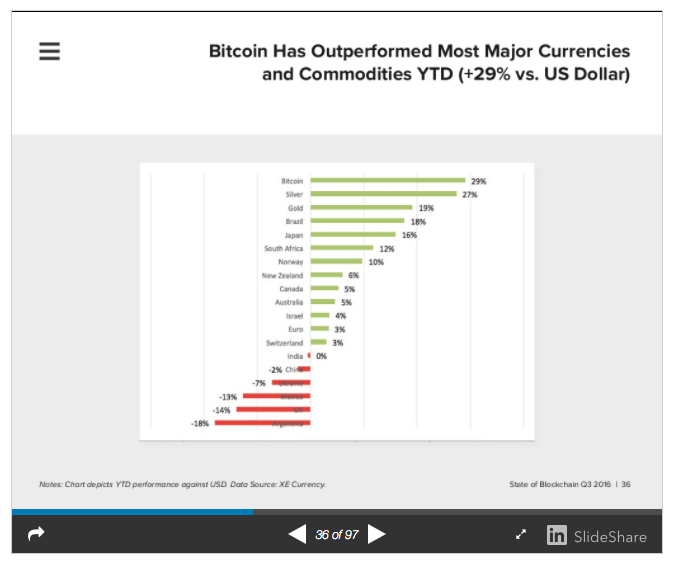 State of Blockchain Q3 2016 from CoinDesk

In June, Brexit gave financial markets a fright, but fintech in London seems to have survived the scare, to remain the tech capital of Europe. This is thanks in part to the direction of Bank of England governor Mark Carney, who has welcomed fintech startups to help write the next chapter for central banking.
October also saw companies outside financial services begin looking at and leveraging fintech solutions. American financial services company Capital One (NYSE:COF) partnered with startup Gem on their blockchain project for medical insurance claims.

Collaboration is the buzzword for 2017

In an interview by Deloitte Ireland, Keith Fingleton of IDA Ireland emphasized 2017 as the year of collaboration in his fintech forecast. There has been a startup wave and now the priority is for these to work together with, instead of against, traditional companies. According to an Accenture fintech report, this is the ‘Fourth Industrial Revolution’, the age of collaborative, as opposed to competitive, ventures.
The World FinTech Report 2017 states that 60 percent of companies applied innovative strategies through partnerships with fintech firms in 2016, a greater proportion than those acquiring them or creating their own solutions team. Further, 76.7 percent of executives see fintechs as an opportunity for partnership, rather than a threat, a potential acquisition or irrelevant. Doubts linger as to whether this is a temporary victory for fintech companies, who seek to cement their elevated position in the markets and eyes of executives.

Challenges in fintech ahead

While we wrote about R3CEV in October, Santander and Goldman Sachs, who were there from the start, have now backed out of the consortium, a group of 70 financial institutions at work on blockchain tech. This is bad news for the partnership that attempted to establish a network effect and a troubling sign for the banking crowd. R3 have partnered with Microsoft (NASDAQ:MSFT) to work on blockchain Proofs-of-Concepts (PoCs).
According to CoinDesk, funding is going to be a challenge for the fintech market. In a takeaway from their Q3 2016 State of Blockchain report, “data shows investors are becoming less certain about industry startups, as evidenced by a decline in smaller and earlier-stage investments.” Instead, more established companies with track records are winning the funding battle.
Guy Halford-Thompson, Chief Executive Officer of Blockchain Tech Ltd. (TSXV:BTL) thinks that exciting times lie ahead as blockchain emerges from practice mode. In his words, “2017 is really the year where blockchain moves out of pilot and into production.”
This can, however, only be achieved through the marriage of bigger and smaller companies pooling resources and talent. Indeed, Chris Skinner, author of blog The Finanser and fintech books, claims investing in unicorns is riskier as they could implode. The message remains: startups and big businesses are mutually dependent upon one another to succeed and exchange expertise.

Financial technologies have built trust and validation with banks, consumers and financial institutions in 2016. This is set to continue on to 2017 as financial products and services look to technology to grow, safely guard and succeed.
Many fintech companies are private startups but are worth keeping tabs on as future prospects. Lots of private companies are building solutions, so watch out for M&A activity as big companies move in, and some have already gone public. Mainly keep an eye on a hybrid of these solutions as executives acquire, build, merge and particularly, partner up with fintechs. Investors must be patient and prepared to play the long game.
Don’t forget to follow us @INN_Technology for real-time news updates!
Securities Disclosure: I, Emma Harwood, hold no direct investment interest in any company mentioned in this article.