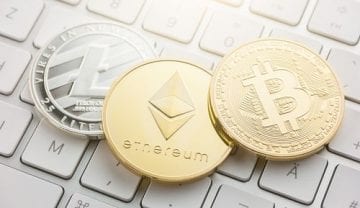 With the rising popularity of cryptocurrencies, here the Investing News Network provides a breakdown of the 5 top digital currencies.

If you’ve heard the word ‘cryptocurrency’ at least once, but aren’t exactly sure what–exactly–it is, you’re certainly not alone.
In simple terms, a cryptocurrency is essentially digital money–a medium of exchange like a currency such as the USD or CAD–and is secure while also being largely anonymous. In other words, cryptocurrencies provide the same service as a fiat exchange but aren’t linked together. “They are wholly separate and as distinct as the crypto and fiat money they support,” Ethnews writes.
Similarly, Cryptocoins News states that the exchange of digital currencies is made possible through cryptography, which secures the transactions and relegates the production of new coins.


Give me my free report!
To provide a little bit of perspective, there are currently roughly 1,200 different cryptocurrencies, according to data from Coin Market Cap, with a combined market cap totaling roughly $150 billion. Not bad for an industry that–overall– has barely been around for a decade.
In terms of the overall outlook for cryptocurrencies, a Market and Markets report suggests the market will reach $2.9 billion by 2023, growing at a compound annual growth rate of 32.31 percent between 2017 and 2023. In 2017, the same report states the cryptocurrency sector was worth roughly $541 million as of October 17.
With that in mind, here the Investing News Network (INN) provides an overview of the 5 top cryptocurrencies in the space for investors to familiarize themselves with. While it goes without saying that bitcoin is the favourite child of digital currencies,  the other four are certainly worth consideration as well.
Here’s a very brief overview of those top cryptocurrencies.

Market cap: $92 billion; current price $5,518.85
As mentioned, bitcoin is the grandfather of digital currencies, meaning it is the first ever peer-to-peer decentralized cryptocurrency; on top of that, it is also the global leader of digital currencies. Bitcoin first broke onto the scene in 2009 when Satoshi Nakamoto “mined” the first set of bitcoin blocks. According to a 2011 article from the New Yorker, Nakamoto spent roughly a year coding the software following the 2008 financial crisis.
Nakamoto had in mind to create an electronic payment system separate from central authorities, Coin Desk writes, and to be able to transfer it instantaneously around the world in seconds at a low cost.
In other words, bitcoin is not printed and held the same way physical money is, but rather held and traded electronically. As Bitcoin.com explains it, bitcoin isn’t necessarily owned by any one in particular–like a company–but anyone can use it.  Rather, bitcoin has the agility to be sent and received around the world anonymously. As it currently stands, there are roughly 16.6 million bitcoins in circulation and has a maximum supply of 21 million.
Since bitcoin first came onto the scene in 2009, its popularity has no doubt skyrocketed, but the last couple of years have truly been the test of its rising popularity. Case in point, the Securities Exchange Commission moved to regulate bitcoin and initial coin offerings (ICOs) in July 2017, while eight US states are working on bills to accept bitcoin and blockchain as methods of payment. As Business Insider highlights, a couple of states have already passed those into law.
That said, countries like Japan already officially recognize bitcoin as a currency in the same regard as fiat currencies, whereas China is still working on its regulation policies.  Meanwhile, Russian president Vladmir Putin has announced the country will implement regulations surrounding cryptocurrencies, which includes requirements and security laws as it pertains to initial coin offerings.
On that note, however, Jimmy Song, a bitcoin developer/entrepreneur, and former vice president of engineering at Armory summarized the advantages of bitcoin as follows: it’s accessible, more liquid, has the largest developer ecosystem, more entrepreneurs building companies around it, and is secure.
Bitcoin’s popularity has garnered so much interest that it’s even been compared to safe-haven assets like gold, and posing allusive questions such as “is bitcoin better than gold?” (Hint: there are cases made for both bitcoin over gold, and gold over bitcoin.)
Year-to-date, bitcoin has increased 453 percent from $997.69 to $5,518.85 as of 5:24 p.m. EST on October 25.

Market cap: $28.4 billion; current price: $298.07
The second top cryptocurrency is ethereum although it is significantly behind digital currency giant, bitcoin. According to Ethdocs.org, ethereum was first detailed in 2013 by Vitalik Buterin following research conducted in bitcoin.
Ethdocs further notes that Burwein published something called the Ethereum white paper. Development of ethereum was then funded by an online crowdsale during the summer of 2014 before going live a year later, on July 30, 2015. Currently there are over 95 million ether tokens in circulation.
While ethereum poses similarities to bitcoin, such as being an open-source software built on blockchain that allows developers to “build and deploy decentralized applications,” one of the biggest differences between the two is that ethereum’s main focus is controlling the program code of a decentralized application.
Furthermore, the miners earn what’s called Ether–which is the digital token in the ethereum network–and is similar to bitcoin in that regard. Like bitcoin, ether can be bought and sold, and doesn’t need a third party to approve a transaction.
As Coindesk.com describes, “ether seeks to provide the fuel for the decentralized apps on the network,” and has been chronicled as the “digital oil”. In other words, Coindesk states the transaction fees are based on how much ether is required.
On that note, while bitcoin’s price increase has stolen headlines almost all year, ethereum’s price increase is the bigger star of the show. At the start of the year, an ether coin was valued at $8.37, and has increased 3,459 percent to $297.04 as of 6:06 p.m. EST on October 25.

Market cap: $7.78 billion; current price: $0.20
Middle of the pack on our top cryptocurrency list is the slightly lesser known currency, Ripple.
Ripple is a payments protocol as well as a cryptocurrency,  and is built on a distributed open source internet protocol. Interestingly, it was released in 2012–well before ethereum–and has also created a real-time gross settlement system, currency exchange and payment network, which is called RippleNet.
According to its website, “Ripple provides one frictionless experience to send money globally using the power of blockchain,” by connecting banks, payment providers and digital asset exchanges through RippleNet. Its cryptocurrency coin is labeled XRP.
Investorpedia states that the XRP token “acts as a bridge to other currencies,” thereby making it easy for currencies to be exchanged.
Ripple’s XRP token has increased from $0.006 since January 1 to its current price of $0.21 as of 6:37 p.m. EST on October 25, representing an increase of 34,900 percent.

Market cap: $5.49 billion; current price: $328.96
Not to be confused with bitcoin–although bitcoin cash wouldn’t exist without the former–bitcoin cash was created as a bitcoin clone. Launched in August of 2017, bitcoin cash was created in order to help facilitate the transaction processes.
On that note, however, those that owned bitcoin before the split were then given an equal amount of bitcoin cash–meaning the same amount of bitcoin cash units in circulation was the same as bitcoin at the time of the split. To differentiate from bitcoin–whose symbol is BTC–bitcoin cash was given the symbol BCH.
By definition, “bitcoin cash brings sound money to the world,” verifies and processes digital transactions by removing third parties that settle disputes between buyers and merchants. Bitcoin.com further states the purpose of bitcoin cash is to eliminate fraud through proof-of-work digital signatures that are verified via blockchain.
Since the bitcoin/bitcoin cash fork, bitcoin cash has decreased from $767.76 on August 2 to $333.25 on October 25 as of 6:56 p.m. EST.

Market cap: $3.95 billion; current price: $55.29
Closing out the top cryptocurrencies list is litecoin, a peer-to-peer cryptocurrency that is similar to bitcoin.  Litecoin has been around since 2011, which was originally developed by Charlie Lee to improve bitcoin. Much like bitcoin, litecoin uses a similar encryption software to maneuver and facilitates transactions. That said, a major difference between the two is litecoin has more coins than bitcoin and quicker transaction speeds.
As others have said, litecoin is the silver to bitcoin’s gold,  and are both scarce in supply.  While there are currently 53.5 million litecoins in rotation, a maximum of only 84 million will exist.
Year-to-date, the price of litecoin has increased from $4.33 on January 1 to $55.65 on October 25, representing a 1,185 percent increase.
Don’t forget to follow us @INN_Technology for real-time news updates!
Securities Disclosure: I, Jocelyn Aspa, hold no direct investment interest in any company mentioned in this article.

See our exclusive index of Blockchain companies on the move
EXPLORE