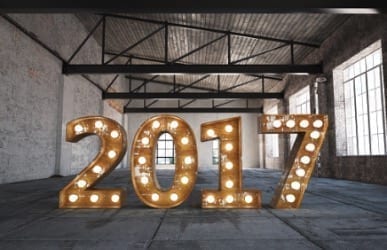 The year ahead will be a defining year for many companies in the industry.

We have already written on the 3D printing industry in 2016, detailing the year according to Simon Fried, Co-Founder of Nano Dimension (TASE:NNDM). He says the current “prevalence of discussions around manufacturing, batch sizes and final part applications is encouraging.” This shows there is new life being breathed into the industry. Fried selected General Electric (NYSE:GE) as the newsmaker of the year, making acquisitions and headlines in 2016.
Could their acquisitive actions prove an example? Here, Simon Fried, along with Elena Polyakova of Graphene 3D Lab (TSXV:GGG), give their thoughts for the upcoming year and the companies to keep an eye on.

In the face of Hewlett-Packard’s (NYSE:HPQ) expansion into commercial 3D printers, Fried will watch how major market players Stratasys (NASDAQ:SSYS) and 3D Systems (NYSE:DDD) fare and whether their fate could be decided by the affordable printers flooding the market. The HP voxel is billed as a game-changer for 3D printing. Polyakova says they “are going to change the landscape dramatically”.
With a market cap of $1.65 billion, 3D Systems is one of the largest 3D printing companies in the world and won’t be planning to be knocked off their perch. They have recently announced a single software solution called 3D Sprint 2.0, designed to accelerate additive manufacturing workflows for their plastic 3D printers. The clue is in the name; 3D Systems are positioning themselves in the race for 3D printing market dominance.
Recommended by both Fried and Polyakova is Carbon3D, whose CLIP (Continuous Liquid Interface Production) technology is the talk of the town. They prioritize functional part printing, which is always going to be rewarded as industries such as healthcare will find uses for customized pieces. In order to stay afloat they must stay ahead of other high-speed technologies. Fried feels room remains for a new star in the market and companies who deliver faster and cheaper solutions with new materials will emerge victorious.
Nano Dimension will be launching a system that welcomes a new era in 3D, which is multi-material printing for electronic circuits. Their Dragonfly 2020 3D PCB (printed circuit boards) Printer takes designs from concept to prototype in hours, rather than weeks, as in the past. Nano Dimension is targeting the PCB market which is forecast to reach a whopping $93 billion market size by 2017, according to research by BPA Consulting Lucintel and EDAcafe. Amit Dror, Nano Dimension’s CEO and Co-Founder, says customer satisfaction “will help us build our reputation as we scale up the sales in 2017.”

The new kid on the block is metal 3D printing. Markets adopting metal AM include aerospace, automotive, medical and dental, to name a few. According to SmarTech’s Metal Additive Manufacturing Market Advisory Service, the “metal additive manufacturing industry has been the fastest growth area of the 3D printing industry since 2014, even outpacing growth in low cost 3D printing technologies.” This has the potential to disrupt and innovate but extensive evolution will need to happen before industries collectively accept manufacturing tools made this way.
The analysis goes on to say that the “metal 3D printing market is still far from maturity”. SmarTech forecast “that titanium printing is becoming the largest opportunity for metal additive manufacturing materials, with revenues exceeding all other alloy groups used in metal AM over the next ten-year period.” ExOne’s (NASDAQ:XONE) major milestone of 2016 was 3D-printing the largest, most complex titanium part made for commercial use, an achievement bound to be surpassed by others craving records.
The 3D metal printing companies GE did not buy could be acquired by other big players. That is, if GE’s action in September, buying two European firms specializing in 3D printing technology, set a precedent. Vertical integration could be a theme for 2017, in what Fried terms as “the new ‘war for talent’.”

For Fried, 2017 “is a period where we are still seeing new technologies and solutions come to market at the same time as more established approaches”. 3D printing will be an active arena, full of competitors. This will likely drive prices down, which has traditionally been one of the sticking points for industries deliberating over adopting the technology.
Polyakova, however, isn’t so sure. Historically “companies run out of business mostly because there were too many companies offering identical products and there was not enough market for everybody”. She says “unless you offer something special it is a race to the bottom”. To sum up, she concludes that “overall I think 2017 is going to be the year when we will see who is going to stay in the game…so you will really have to keep an eye on public announcements in the space”.
Investors would be putting their best foot forward into 2017 if they do their research on emerging companies now, while many players are vying for space.
Don’t forget to follow us @INN_Technology for real-time news updates!
Securities Disclosure: I, Emma Harwood, hold no direct investment interest in any company mentioned in this article.
Editorial Disclosure: Graphene 3D Lab and Nano Dimension are clients of the Investing News Network. This article is not paid-for content.