That’s what the Fraser Institute says in its latest “Annual Survey of Mining Companies.” Can you guess which provinces they are?

Canadian provinces Saskatchewan and Manitoba are now the world’s most attractive jurisdictions for mining investment.
According to the Fraser Institute’s “Annual Survey of Mining Companies, 2016,” released February 28, the two provinces beat out Western Australia, the previous year’s most attractive jurisdiction, to take the top two spots on the list.
“Competitive tax regimes, efficient permitting procedures and certainty surrounding environmental regulations and land-claims have vaulted Saskatchewan and Manitoba to the top in the eyes of miners looking to invest,” Kenneth Green, senior director of energy and natural resource studies at the Fraser Institute, said in a press release. Green is also a co-author of the report.
The survey was completed between August 30 and November 18 last year by about 350 respondents. A total of 104 jurisdictions were evaluated, with rankings based on both policy attractiveness and geologic attractiveness for minerals and metals.
As the infographic below shows, Saskatchewan and Manitoba are not the only Canadian provinces that made the list — Quebec came in sixth place, up from eighth place last year. Queensland, another Australian state, also made the top 10. 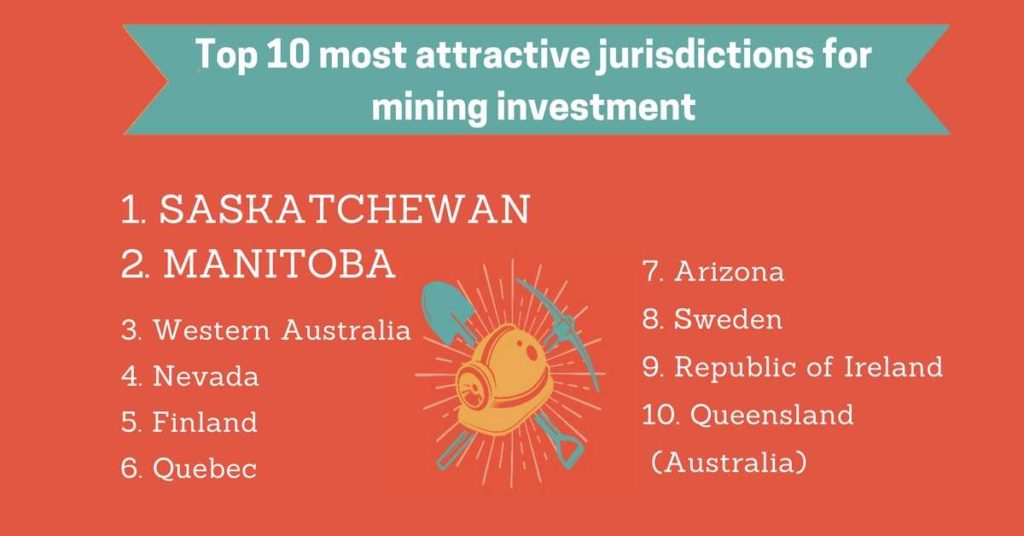 View the infographic here.
Ontario and BC, Canada’s other two large mining jurisdictions, dropped in rank in this year’s report. The former fell three spots to come in 18th place, while the latter sunk to 27th place after coming in 18th place last year.
“While other jurisdictions in Canada and around the world have improved their attractiveness to investors, Ontario and B.C. fell this year because these provinces continue to be hampered by uncertainty surrounding land claims,” Taylor Jackson, a report co-author and senior policy analyst at the Fraser Institute, explained.
Permitting is also an issue in BC. A separate Fraser Institute study on permit times for mining exploration, also released on February 28, shows that BC has long permit wait times compared to other Canadian provinces. BC’s permitting process is also less transparent.
Worldwide, the 10 least attractive jurisdictions for mining investment (starting at the bottom) are: Jujuy (Argentina), Neuquen (Argentina), Venezuela, Chubut (Argentina), Afghanistan, La Rioja (Argentina), Mendoza (Argentina), India, Zimbabwe and Mozambique.
Argentina’s poor performance is a little surprising given widespread hopes that the country’s new government will be more welcoming to miners. In explanation, the Fraser Institute notes that its ranking appears to have been “driven by investors’ views of [the country’s] pure mineral potential and not necessarily policy.”
Don’t forget to follow us @INN_Resource for real-time news updates!
Securities Disclosure: I, Charlotte McLeod, hold no direct investment interest in any company mentioned in this article.