Here’s what happened on the second day of this year’s Vancouver Resource Investment Conference. 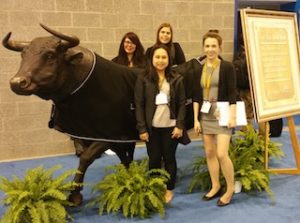 The 2017 Vancouver Resource Investment Conference (VRIC) wrapped up Monday night, and by all accounts it was a success. Attendees were optimistic, the floor was busy and many talks and panels were standing room only — overall the mood was noticeably better than it has been for the last few years.
If you didn’t make it out to VRIC, don’t worry. The Investing News Network team was on site interviewing thought leaders, meeting exhibitors and attending presentations. Scroll on to see what happened on Monday, and make sure to click here to check out the highlights from Sunday.
Monday’s first panel featured representatives from the TSXV, the CSE and OTC Markets Group. Moderator Jay Martin of Cambridge House posed a number of good questions, and the talk wrapped up with a discussion of how to get younger investors interested in mining.

Serious wins in the mining sector will drive interest from Millennials, says Brady Fletcher of the TSX Venture Exchange #VRIC17

Bob Dickinson and Ron Theissen, both of Northern Dynasty Minerals (TSX:NDM,NYSEMKT:NAK), also took the stage early Monday. Speaking to Marin Katusa, who believes the company’s share price is “nowhere near the top,” both said the controversial project will take significant steps forward this year.

Northern Dynasty will have a resolution with the EPA on the Pebble project in the next 100 days, says Ron Theissen #VRIC17

.@Explor_Insights says it’s a good time for #zinc, but he doesn’t feel much urgency about #uranium #VRIC17

Peter Spina, president and CEO of GoldSeek.com and SilverSeek.com, interviewed Ed Steer of GATA midway through the day — stay tuned for Investing News Network interviews with both of them. Gianni Kovacevic, author and executive chairman of Copperbank Resources (CSE:CBK), also spoke at that time. His favorite stocks include Skyharbour Resources (TSXV:SYH).


Grab Your Free Report
An afternoon presentation from Louis James, editor of the International Speculator, focused on yellow metals gold and uranium. James is bullish on both this year, and said that NexGen Energy (TSX:NXE), Fission Uranium (TSX:FCU) and Uranium Energy (NYSEMKT:UEC) are some of the uranium companies he likes.
Lithium companies Lithium X Energy (TSXV:LIX), Neo Lithium (TSXV:NLC), Millennial Lithium (TSXV:ML) and Iconic Minerals (TSXV:ICM) were also center stage in the afternoon, offering tips on how to evaluate lithium projects.

.@neolithium says investors should ask how much magnesium projects have. #VRIC17 #lithium

One of Monday’s last panels featured newsletters writers Benj Gallander and Frank Curzio, as well as Cook and James. Katusa was the moderator, and among other things he asked participants what major lesson they’ve learned from investing in juniors. Gallander said he won’t invest in companies without revenue unless they will have it within six months, while Curzio recommended that investors who have made a lot of money take profits — in other words, take some off the table.
Stay tuned for the Investing News Network’s VRIC video interviews, plus more in-depth coverage of select talks. And of course, let the bull run!
Don’t forget to follow us @INN_Resource for real-time news updates!
Securities Disclosure: I, Charlotte McLeod, hold no direct investment interest in any company mentioned in this article.