Here’s a look at current and upcoming block-caving mines as well as an analysis of how to tell whether a block-caving operation is a good investment. 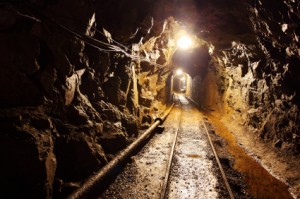 With the discovery of near-surface mineral deposits declining, exploring for deep-seated deposits and finding innovative ways to mine them is the solution to the ever-growing need for metals.

Two of the world’s largest copper mines will soon move underground. The Grasberg mine in Indonesia, operated by Freeport-McMoRan Copper & Gold (NYSE:FCX), will reach its open-pit limit by 2016, while Codelco’s Chuquicamata mine in Chile is expected to do the same in 2018.

Other potential block-cave mining operations include:

Underground mining of massive, low-grade mineralized ore bodies has been carried out for decades, but in total there have been fewer than 20 block-caving mines. In most cases, this type of underground bulk mining has occurred in order to follow mineralization at depth after the exhaustion of open-pit ore.

Bulk-mining methods are a necessary component of economically mining massive, low-grade porphyry copper, gold, molybdenum and diamond deposits, and block caving is the method of choice. The process is suitable for the mining of near-vertical, compact and highly fissured ore bodies.

By analyzing the advantages and disadvantages of the block-cave mining method, investors can understand the risk profile of this type of operation and can select the companies that are most likely to succeed in mining these huge deposits.

The block-cave mining method is capital intensive and can cost anywhere between $2 and $10 billion. While that is comparable to the cost of starting an open-pit mining operation, block caving takes significantly longer, usually in the 15- to 20-year range. For example, Freeport’s Deep Mill Level Zone underground mine is expected to be fully developed over 12 years.

Another factor that differentiates block caving from open-pit mining operations is that for a block-caving operation, on average, 70 percent of capex is spent before any revenue is generated.

Block caving’s per-unit cost is also low because it can produce almost as much ore as an open-pit mining operation over an extended mine life — up to 50 years.

Block caving is not without risks. For instance, if large blocks collapse from the roof of a cave, production drifts/galleries can also collapse and mining activity can be halted. Such a massive collapse happened in 1999 at Northparkes in Australia, causing fatalities and an airblast that shot through the mine.

Deep underground mines are also plagued by other negative events, including rock bursts and man-made earthquakes. These are caused by the sudden release of the high energy stored in compressed rocks as well as fault-plane movements caused by mining operations. Deep underground gold mines in South Africa are often affected by this type of seismic event.

Investors must bear in mind that unlike other mining operations, block caving is inflexible; once started, it cannot be changed. In other words, if the initial design of a block-caving operation is faulty, at least some of the money invested in the mine will likely be at risk. Further, a block-cave mining operation cannot be put on care and maintenance as the company is then at risk of losing all of its capital investment.

Another thing that investors should consider is that there are not many qualified underground miners, so block-caving personnel must be trained from scratch, sometimes over a short period of time. As the open-pit mining operation at Chuquicamata in Chile reaches its end, some 3,000 to 3,500 miners will be retrained over three years for the upcoming underground block-caving operation. At the New Afton block-caving operation in Canada, 80 percent of the workforce was comprised of inexperienced people that had to be trained on the job. Investors, therefore, should know that the transition from open-pit to underground mining involves potential delays and additional labor costs as personnel are trained.

Block-caving operations located close to inhabited centers are not desirable as they create significant risks for water resources, infrastructure, buildings and human lives due to ground subsidence.

Further, underground block-cave mines located in wet climates have a higher risk of flooding than those located in temperate or desert conditions. Managing water inflows and dewatering the mine and surrounding area for 30 to 50 years in a row will definitely have adverse impacts on groundwater and possibly on the local flora and fauna.

These types of environmental impacts are not overlooked by regulators, NGOs and local communities and can result in longer approval times.

On a related note, an often-overlooked aspect of deciding if an area is a good site for a block-caving operation is the region’s seismicity. Some regions, like Bingham Canyon, are quite stable and present little seismic risk, while other sites are characterized by high seismicity — for example, the Chilean El Teniente or Chuquicamata. An earthquake that might not adversely affect an open-pit mining operation is capable of substantially damaging a block-caving operation through a massive cave-roof collapse.

Exploring and finding rewarding underground deposits is a job that can be successfully completed by juniors, but designing and bringing such challenging mineral deposits into production is a task that requires larger companies that have access to capital and technical expertise. There are many questions that an investor might need answered before deciding to invest in a medium-sized company that is trying to develop a smaller bulk-mining operation.

Large mining groups that have multiple producing mines are also better positioned to weather production stoppages than companies that only have one or two operational mines. As time goes by, most of the world’s ore production is going to be sourced from underground mines that are definitely riskier than surface-mining operations. Under these circumstances, a stoppage at one important block-caving mining operation that produces significant amounts of ore could put a dent in supply and could result in a metal price increase. Compare that to the current situation, where it is easy to respond to higher demand by increasing production at existing open-pit mining operations; it is far more difficult to increase production at block-cave mines.

The large capital expenditures and long lead times associated with block-cave mines highlight the importance of a correct geopolitical risk assessment of a prospective block-cave mining operation. The Oyu Tolgoi case speaks for itself. Friendly mining jurisdictions where open-pit operations have gone undisturbed for decades and where mining companies are transitioning to underground bulk mining are good places to invest.

Securities Disclosure: I, Dan Oancea, hold no direct investment interest in any company mentioned in this article.

Chuquicamata’s Life Underground Will Cost a Fortune, but is Likely to Pay Off for Codelco