The price of silver has plunged almost 14 percent in 2018, becoming one of the biggest upsets in the precious metals sector.

In Q3, the white metal dropped below the US$16-per-ounce mark and even crashed to lows not seen in two and a half years when it fell under US$14 on September 11.

Geopolitical concerns, consistent interest rate hikes and a rallying US dollar have kept prices down throughout the year. As of mid-December, silver was trading at US$14.68.

With the start of 2019 just around the corner, many investors are now wondering what will happen to silver next year. Here, the Investing News Network (INN) looks at silver’s price performance in 2018 and what companies and analysts expect for the silver outlook in 2019.

Like its sister metal gold, silver performed with much volatility in 2018. Against a consistently rallying US dollar, the price has been dropping since the beginning of the year.

As the chart below from Kitco shows, the silver price reached its yearly peak in late January, when it hit US$17.54. The price rise was driven by US Treasury Secretary Steven Mnuchin stating that he was in favor of a weaker currency. This comment caused the US dollar to hit a three-year low and allowed the metal to rise. 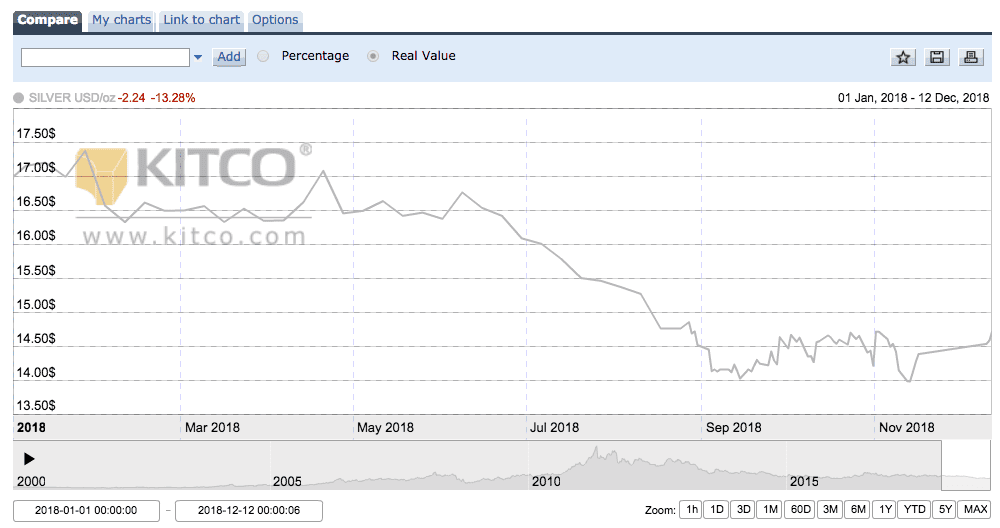 In contrast, the white metal’s lowest point of the year came in September, when it traded just under US$14 — its steepest decline in two and a half years.

When asked what happened to silver on that day, David Morgan of the Morgan Report told INN that the “why” was “very basic,” explaining that overall the dip had more to do with selling pressure than buying pressure. “There’s been a lot of people that have given up on the silver market, and that is verified by the amount of retail sales in silver,” he said at the time.

Some market participants were expecting the silver price to increase more than it did, including Morgan, who told INN at the beginning of the year that he could see 2018 being a year of positive price action for the white metal.

He even thought it could outperform gold at some point in the year. As Morgan said to INN in March, “I think this year silver will outperform gold. I could see a 30-percent increase in the price of silver from the bottom, and maybe something similar in gold from last year — 10 to 20 percent. Those are modest numbers relative to what gold can do. But if you compound your money at 20 percent, you could make a fortune over a few years, really.”

Reviewing where the silver price ended up later in the year, Morgan noted that most investors who purchase the white metal typically buy it and hold it, as opposed to buying and selling back — but that pattern changed over the course of 2018.

“I talked to one [silver] dealer that I know very well, and he said for the first time in years they had a few months where they actually purchased back more than they sold.” Morgan added, “that’s normally when you get capitulation, where people give up — that’s usually the bottom.”

For Alain Corbani, head of commodities at Finance SA, the white metal dipped due to the fact that it generally follows the gold’s path. “Silver is more volatile than gold, so technically speaking or if we look at the statistics, if gold goes down by 10 percent you expect silver to follow gold and with more volatility,” he said in October.

He continued, “so this is exactly what happened, and gold went down mainly because the US dollar got stronger.”

Peter Grosskopf, CEO of Sprott (TSX:SII), agreed with Corbani, telling INN, “we believe silver has a certain attraction to gold, which is a much smaller market, and when the factors come in that give gold a bit of a tailwind and gold starts to perform, silver usually performs better. It’s just a smaller market and it gets squeezed quicker.”

Another battle that silver faced in 2018 was a market in surplus, according to Lindsey Ice, economist at FocusEconomics.“Silver prices were depressed overall over the course of 2018. This was primarily the result of a surplus market due to recovering mining production,” she said.

Ice also placed blamed the metal’s performance on shrinking demand from sectors that have relied more heavily on the precious metal in the past. “Meanwhile, weaker purchasing of jewelry, coins and bars — coupled with impressive gains in stock markets — subdued demand dynamics in comparison to 2017, despite a strong industrial market,” she noted.

Many market watchers believe that 2018 saw silver take hits due to the fact that it moved away from its safe-haven status during times of geopolitical volatility.

A lack of investor interest in both silver and gold is something that both companies and analysts agreed upon when reviewing the patterns of 2018.

“The hard swings to the up and down side continued to erode investor confidence,” stated Robert Carrington, CEO of Newrange Gold (TSXV:NRG).

2018 has centered on geopolitical tensions, steadily increasing interest rates and a strong US dollar, leaving many investors believing that the silver price has reached its bottom. But what will happen to the silver price in 2019?

Looking ahead, Ice believes that silver will see a price rise thanks to demand from the automotive industry. “Next year, industrial demand in the automotive and electronics sectors should remain robust, which should in turn support a rise in silver prices following a disappointing 2017,” she noted.

However, Ice also acknowledged potential risks that the precious metal may face next year. “Risks include global trade tensions, higher global interest rates and the possibility of slower-than-expected growth in China,” she said.

In a recent FocusEconomics report on silver, analysts said, “[i]n industrial application, solar panel demand has been hampered by Chinese legislation to reduce solar panel subsidies.” If this trend continues, the white metal may be moderately shaken by the reduction.

Unlike the disinterest that came from investors in 2018, many insiders believe that 2019 will be the year that they come back to the familiarity of precious metals.

“Prices are expected to move higher over the medium-term on tighter supply and as equity markets continue to shed some of this year’s impressive gains, which would boost investors’ appetite,” the FocusEconomics analysts stated.

They added, “[f]urther developments in the global trade climate, which saw waning trade tensions between the US and China at the G20 summit, will be an important factor behind investment demand — and consequently price movements.”

Additionally, what happens to the US dollar next year will be a crucial indicator as to how silver will perform, as a softer greenback makes commodities more appealing. Many analysts see the greenback dipping next year, with the precious metal returning to its safe-haven nature.

“So the way we’re going now is the dollar up, but the US trade balance is actually going to get larger. The trade deficit is going to get larger, which is of course exactly not what the US administration wants,” said Martin Murenbeeld, president of Murenbeeld & Co., in October.

He noted, “so there’s got to — we’ve got to come to some kind of a resolution to that. And the only way out of this particular conundrum is if you can have some kind of international agreement that would devalue the dollar.”

McEwen feels similarly to Murenbeeld, and commented, “if you look around, when this confidence in the dollar stops or weakens that seems to be the biggest driver today — that the dollar has remained very strong. All commodities, as a result, have put on weaker performance.”

Much like many of the other market watchers INN spoke to, McEwen expects the greenback to lose its steam in the upcoming year, allowing precious metals to shine a little stronger.

Industry insiders also believe that if the Fed slows its interest rate hikes next year — which many believe will happen — the white metal will benefit from the halt.

Brian Leni, founder of Junior Stock Review, told INN, “[i]nterest rates are, again, key to my predictions on the direction of the price … I’m going to go out on a limb and say that [the Fed] won’t raise rates further in 2019.”

Firms polled by FocusEconomics estimate that the average silver price for 2019 will be US$16. The most bullish forecast for the year comes from Julius Baer (SWX:BAER), which is calling for a price of US$17.50; meanwhile, BNP Paribas (EPA:BNP) is the most bearish with a forecast of US$14.20.

Editorial Disclosure: Newrange Gold is a client of the Investing News Network. This article is not paid-for content.