Safe haven demand has left the precious metals market and headed over to the US dollar and Treasurys as Eurozone economic woes are expected to further strengthen the greenback. But, the US is itself still embroiled in a financial crisis. How much longer can the greenback remain king? 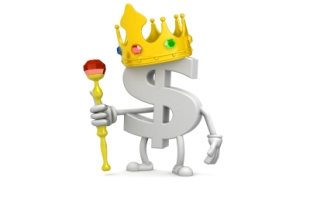 If you’re a silver bug, September 23rd may have been one of your Blackest Fridays in recent memory as silver futures prices slid nearly 18 percent, the metal’s largest one-day percentage drop since 1984, according to FactSet Research. Silver closed at $30.11 an ounce, its lowest level since February.

Commodities and stocks worldwide are coming under pressure as fear of another global recession is creating a selling panic across the board. “Very serious near-term technical damage has been inflicted” upon silver, Kitco’s Jim Wyckoff commented Friday. “Prices are in a steep five-week-old downtrend on the daily bar chart.”

Kitco’s Jon Nadler warned Friday that if the white metal can’t hold the low $30s level, then $25 silver may be in the cards. By Monday, silver had dropped as low as $26.15 an ounce in overnight trading, making Nadler’s prediction highly probable in the next few days. CME Group’s Friday announcement of another increase to margin and maintenance calls in gold and silver futures is also placing downward pressure on already battered prices.

Significant losses in both gold and the commodities markets are weighing heavily on silver. Silver prices have been hit by a “double-edged sword,” said Global Securities Futures Representative Jamie Greenough in an interview with Silver Investing News reporter Michael Montgomery last week. Silver’s dual role as a precious metal and an industrial metal has a major influence over the infamous volatility of the silver market. As we’re witnessing, damage to safe haven sentiment coupled with a lack of confidence in the global economy can send silver prices spiraling down with a velocity not seen in the gold or industrial metals markets.

Watching the markets plunge on growing recession fears and concerns that major banks are on the verge of default takes me back to September 2008 when I was attending the sixth annual Silver Summit in Coeur d’Alene, Idaho.

The headlines at that time revolved around the Lehman Brothers bankruptcy, Bank of America’s takeover of Merrill Lynch, and Paulson’s bailout announcement. September 16, the day before I flew from Vancouver to Coeur d’Alene, silver was trying desperately to stay above $10.50 an ounce after dropping nearly $3.00 in a matter of days.

“We are in the one place in financial history that will probably go down as the most memorable ever because it’s a worldwide phenomenon and as everybody bails out of the dollar the whole ship goes down,” said David Morgan, speaking at the 2008 Silver Summit two-day conference.

Financial crisis has spread to Europe

Three years later it certainly has become a “world-wide phenomenon” as the financial crisis has spread to Europe, and now it’s the sovereign debt disaster in the EU that is driving markets down.

“It is critical that to fuel growth, banks be in a position to finance the economy, to finance enterprises, to finance households, to finance local governments. To do that they need to have the balance sheet that will actually support credit to the economy,” urged Lagarde.

The Guardian report highlights some distressing indicators that the world may be on the brink of another global recession if Europe’s leaders are unable to take control of the problem. IMF estimates shows that EU banks have lost €300bn in the last year “as a result of the growing risk of default by Greece and other vulnerable eurozone countries.” French bank shares “have lost 50 percent of their value in three months” and continue to fall. Purchasing managers surveys show “a sharp downturn in both manufacturing and services growth, adding to fears that Europe could be heading for a new recession.”

US Dollar and Treasurys: the preferred safe haven

Safe haven demand has left the precious metals market and headed over to the US dollar and Treasurys. Apparently, investors are selling their gold and silver holdings to purchase US dollars as Eurozone economic woes are expected to further strengthen the greenback. The increasing likelihood that the Bank of England may further its QE measures and the ECB may cut rates by the end of 2011 positions the dollar as an attractive alternative, said Brown Brothers Harriman & Co. currency strategist Mark McCormick.

Gold and silver bugs are surely distressed and most likely infuriated by the fact that the dollar has knocked precious metals off the podium for first place safe-haven asset given that the US is itself still embroiled in a financial crisis that continues to leave many unemployed, the housing market still in crisis and the economy “twisting in the wind,” as one Friday headline described it.

Speaking at the Silver Summit in 2008, Sprott Asset Management chief investment strategist John Embry urged the audience to question whether or not they believed that the underlying fundamentals for the US dollar had improved enough to rationalize its increasing strength: “Does anyone truly believe that a country whose housing, automotive and airline industries are in a state of collapse, whose banking systems are in a shambles, whose retailing industry is sharply retrenching, and whose consumers are being eaten alive by rampant food and energy inflation while unemployment mounts, is actually growing?”

This question from three years ago is still valid today. Once again, the US Congress is embarrassingly close to another government shutdown brought on by political posturing over government spending. How much longer can the greenback remain king?

6 responses to “Silver and Gold Passed Over for US Dollar”