Northern Lights is pleased to announce that it has completed the cash payments required to complete the acquisition of the Secret Pass Gold Project.

Northern Lights Resources Corp. (CSE:NLR) (the “Company” or “Northern Lights”) is pleased to announce that it has completed the cash consideration payments required to complete the 100% acquisition of the Secret Pass Gold Project (“Project”) located in Mohave County, northwestern Arizona (the “Transaction”) as shown on Figure 1. 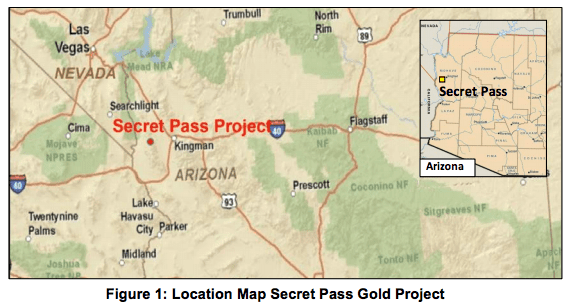 Northern Lights has completed cash payments to the Project vendors totaling US$350,000 as defined under the definitive purchase agreement for the Transaction announced by the Company on July 15, 2019. Within 30 days, the Company will issue 2,000,000 common shares to the Project vendors and complete other administrative arrangements required to complete the Transaction.

Upon completion of the Transaction, Northern Lights will own 100% of the Secret Pass Gold Project. There are no third party royalties payable on future production from the Project.

As illustrated on Figure 2, the Secret Pass Project is located in the famous historic Oatman-Katherine Gold District of northwestern Arizona, close to the Nevada and California State borders. The Oatman-Katherine Gold District was established in 1863 and historically is Arizona’s third largest gold producing area. Between 1863 and 1940 it is estimated the district produced over two million ounces of gold and one million ounces of silver. The district includes many historic mines and workings with over 80 separate mines reporting production. 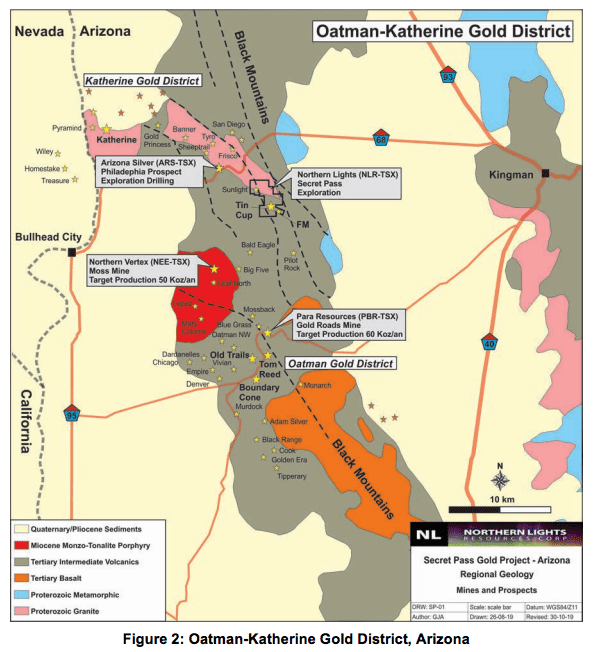 More recently, there has been a significant increase in exploration and mining activity in the Oatman – Katherine District. Current operating mines in the area include the Moss mine owned by Northern Vertex Corp., an open pit heap leach operation that reached commercial production in September 2018, and Para Resources Inc. that reported starting underground production at its Gold Roads Project in February 2019.

The main structural feature in the region is an imbricated system of shallow to steeply dipping faults that trend north-northwest. With reference to Figure 2 this fault system has been traced for approximately 65 km extending from the Oatman District in the south, through the Secret Pass-Frisco Mine area, into the Katherine Gold District. As illustrated on Figure 3, two regional structures, the Union Pass and the Frisco Mine faults, transect the Secret Pass property. 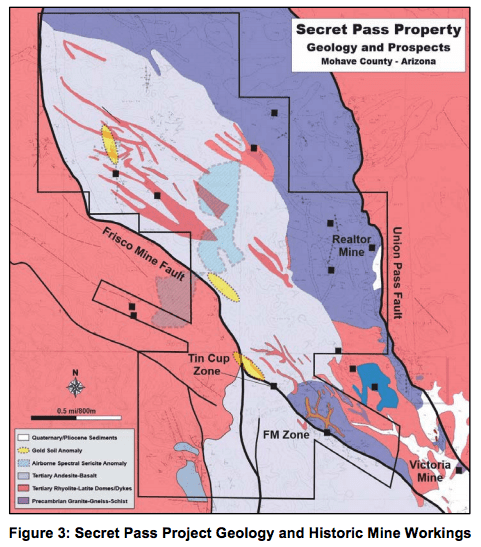 Numerous gold showings and prospects are associated with the Union Pass and Frisco Mine faults, and some have reported limited gold production. The Oatman District is located approximately 13 km south of Secret Pass property, and has produced over two million ounces of gold.

Mining records indicate that there are 15 historic mine workings located in the Secret Pass license area. The Tin Cup and the FM gold prospects were extensively explored and drilled by Santa Fe Mining and Fischer-Watt from 1984 to 1991. A total of 14,000 metres of drilling was completed in 126 holes including 114 reverse circulation and 12 core holes.

The mineralized zone has a strike length of approximately 245 metres and a drillindicated depth of up to 180 metres, both open along strike and depth. High-grade mineralization greater than 3 g/t Au, is localized in a 3.0 to 7.6 metres wide, steeply northeast-dipping structure that occurs within a much wider mineralized fault zone that ranges from 30 to 45 metres in width. The mineralization has a northwest plunge and is considered to be open at depth. Surface oxidation extends to a depth of up to approximately 120 metres.

The FM Gold Zone is also controlled by the northwest-trending Frisco Mine Fault that dips steeply to the southwest. Gold mineralization at the FM zone is hosted exclusively by granite and rhyolite and has a strike length of approximately 200 metres and extends to a depth of up to 120 metres, open along strike and depth.

The zone of mineralization ranges from 13 to 30 metres in width at the surface and then transitions into distinct 3.0 to 8.0 meter near-vertical, low-grade (<1.5 g/t Au) structures at depth. Depth of oxidation is variable but is generally extends to a depth of 75 to 100 metres.

During the period from 1984 to 1991 drilling program, significant gold mineralization was intersected in a number of holes in the Tin Cup Gold Zone. As illustrated in Figure 4, gold assays ranging as high as 40 g/t Au over significant widths at depths ranging from 30 to 180 metres below surface. These results are historical in nature and a qualified person has not done sufficient work to verify these previous drilling intersections. 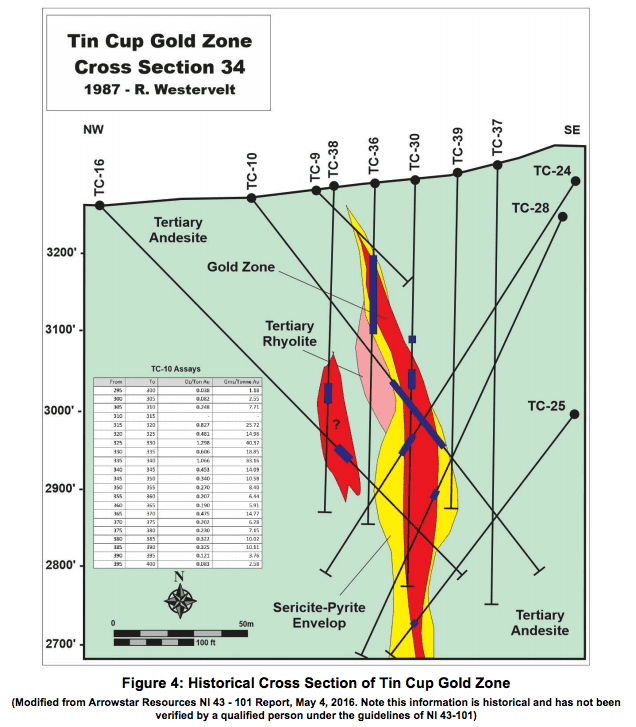 Upon completion of the Transaction, Northern Lights’ initial goal for the project will be to generate a NI43-101 compliant resource estimate for the Tin Cup Zone and to establish additional exploration targets.

The initial exploration program for the Secret Pass Gold Project will be conducted in two phases with Phase 1 focused on the review of historic drilling and resource information at the Tin Cup/Fm Zones plus the completion of additional background exploration work for the Project.

CAUTIONARY STATEMENT REGARDING FORWARD-LOOKING INFORMATION: This news release includes certain “forward-looking statements” under applicable Canadian securities legislation. Forwardlooking statements include, but are not limited to, statements with respect to: the terms and conditions of the proposed private placement; use of funds; the business and operations of the Company after the proposed closing of the Offering. Forward-looking statements are necessarily based upon a number of estimates and assumptions that, while considered reasonable, are subject to known and unknown risks, uncertainties, and other factors which may cause the actual results and future events to differ materially from those expressed or implied by such forward-looking statements. Such factors include, but are not limited to: general business, economic, competitive, political and social uncertainties; delay or failure to receive board, shareholder or regulatory approvals; and the uncertainties surrounding the mineral exploration industry. There can be no assurance that such statements will prove to be accurate, as actual results and future events could differ materially from those anticipated in such statements. Accordingly, readers should not place undue reliance on forward looking statements. The Company disclaims any intention or obligation to update or revise any forward-looking statements, whether as a result of new information, future events or otherwise, except as required by law.

Click here to connect with Northern Lights Resources (CSE:NLR) for an Investor Presentation.