As 2018 draws to a close, many investors are looking ahead to what will happen to platinum next year. Read on for our 2019 platinum outlook.

The price of platinum dropped almost 16 percent in 2018, and took a major back seat to its sister metal palladium over the course of the year.

Since the precious metal is primarily used in catalytic converters for diesel-powered vehicles, the lack of demand for diesel-powered cars in Europe and China throughout 2018 weighed on the metal and prices suffered. Additionally, as gasoline-powered vehicles rose to prominence, palladium prices increased — it is mainly used in catalytic converters for gasoline-powered cars.

Geopolitical concerns, a steady US dollar and a dip in demand via jewelry consumption were additional factors that kept prices down throughout the year. As of mid-December platinum was trading around US$795 per ounce.

With the start of 2019 fast approaching, many investors are looking ahead to what will happen to platinum next year. Here the Investing News Network (INN) details platinum’s price performance in 2018 and what companies and analysts anticipate from the metal in 2019.

Unlike palladium, platinum saw a decrease in demand throughout 2018. Paired with a strong US dollar and an overall lack of investor interest in precious metals, prices have been on a decline since the beginning of the year.

As the chart below from Kitco shows, the platinum price reached its yearly peak on January 19, when it traded at US$1,010. 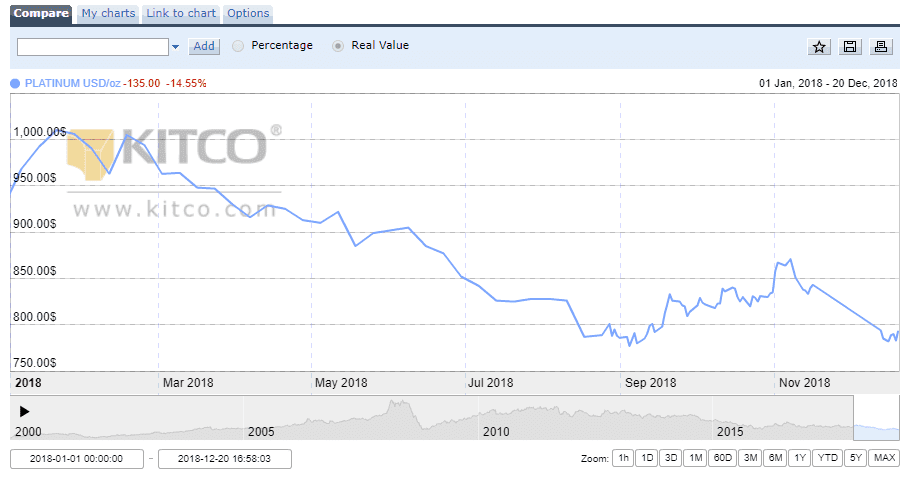 Some market participants, such as Thomson Reuters GFMS, believed that platinum prices would begin rebounding in 2018.

In the company’s Platinum Group Metals Survey 2018, released this past summer, Rhona O’Connell, head of GFMS at Thomson Reuters, stated, “[w]e expect the platinum price will start a recovery this year, albeit a gradual one. This is predicated on a small deficit this year, of nearly 0.3- million ounces, fueled by a contraction in supply, chiefly from the South African mining sector, coupled with rising demand.”

Platinum-group metals (PGMs) company New Age Metals (TSXV:NAM,OTCQB:NMTLF) also believed that platinum’s prospects would be bright this year. Harry Barr, chairman and CEO of New Age, told INN, “we expected 2018 to be a year where there was a resurgence of interest in the mining sector.”

Unfortunately, investor interest waned and increased demand was short lived. Prices were left to stall and dip as a result.

Reflecting on what happened to the metal throughout the year, Barr stated, “platinum has struggled primarily as its demand has diminished due to a decrease in industrial use in autocatalysts for diesel engines, and lower demand in the jewelry sector as well as a precious metal store of value.”

Similarly, Oliver Reynolds, economist at FocusEconomics, told INN, “platinum has had a soft 2018, largely on the back of drooping demand for diesel vehicles — which require platinum — and a substantial market surplus of the commodity, even though global production is expected to decline from 2017.”

He added, “meanwhile, prices for sister metal palladium surged, which will have been particularly galling for platinum investors.”

2018 has been driven by a tumble in demand, geopolitical tensions, loss of investor interest and a strong US dollar. But what will happen to the platinum price in 2019?

Looking ahead, Reynolds believes that platinum prices will rise in 2019. “Although supply should pick up slightly on higher output from North America, while demand is also set to rise, the ongoing decline in sales of diesel vehicles will dampen any increase in prices,” he noted.

However, he also added, “the upshot is that the supply overhang should gradually narrow, which will be positive for prices.”

Barr also believes supply will shrink next year. “Platinum production in Africa, which accounts for over 70 percent of global supply for the metal, is also expected to decrease due to multiple reasons,” he noted.

“A combination of unresolved problems that have long plagued South African mining — wage-related labor strikes and weak infrastructure — are expected to weigh on South African platinum mine supply. Depleting reserves and uneconomic depths of mining the ore at existing mines are also a factor that has reduced production in this area,” he added.

If supply does shrink in 2019, this will more than likely raise prices as concerns over a potential supply deficit could cause investors to spring into action to make sure that they have the metal in their portfolio.

In addition to a drop in platinum production, industry insiders believe that demand for the precious metal within certain sectors will grow next year.

In a recent FocusEconomics report on platinum, analysts at the firm said, “[n]ext year, platinum prices are expected to increase somewhat thanks to a recovery in jewelry demand and stronger industrial demand, which should more than offset a decline in demand from the automobile sector due to falling diesel sales.”

However, FocusEconomics was also quick to note that market watchers shouldn’t expect to see a huge turnaround for platinum. “[P]rices will likely remain subdued compared to historical values as supply continues to exceed demand — partly due to greater supply from North America.”

The report continues, “the evolution of global trade tensions between the US and China, which eased following the G20 summit, will be an important factor behind investment demand — and hence the evolution of prices.”

Unlike the disinterest that came from investors in 2018, many insiders believe that 2019 will be the year that they come back to the familiarity of precious metals.

“Prices are expected to move higher over the medium-term on tighter supply and as equity markets continue to shed some of this year’s impressive gains, which would boost investors’ appetite,” FocusEconomics explains.

For his part, Barr suggested that investors should be interested by the fact that PGMs is a smaller sector than other precious metals, such as gold. “Given the PGMs industry’s relatively smaller size, the fundamentals of PGMs can be more easily monitored and thus provide investors with more confidence while making investment decisions,” he stated.

Additionally, what happens to the US dollar next year will have some effect on platinum, as a softer greenback tends to make commodities more appealing to investors. Many analysts see a dipping greenback taking place next year, with the precious metal returning to its safe-haven nature.

He added, “so there’s got to — we’ve got to come to some kind of a resolution to that. And the only way out of this particular conundrum is if you can have some kind of international agreement that would devalue the dollar.”

Rob McEwen, chairman and chief owner of McEwen Mining (TSX:MUX, NYSE:MUX), feels similarly to Murenbeeld, commenting, “if you look around, when this confidence in the dollar stops or weakens … that seems to be the biggest driver today, is that the dollar has remained very strong and all commodities, as a result, have put on a weaker performance.”

Much like many of the other companies and analysts INN spoke to, McEwen expects the greenback to lose its steam in the upcoming year, allowing precious metals to shine a little stronger.

As a sign of faith in platinum, Barr revealed that New Age Metals has several catalysts on the horizon for the new year. “With the commissioning of an economic assessment, a preliminary economic assessment (PEA), New Age Metals’ River Valley PGMs project is now moving to the development stage. The PEA is scheduled to be complete by the end of the second quarter 2019.”

Looking ahead at price expectations for 2019, firms polled by FocusEconomics estimate that the average platinum price next year will be US$875. The most bullish forecast for the year comes from TD Securities, which is calling for a price of US$1,031; meanwhile, Deutsche Bank (NYSE:DB) is the most bearish with a forecast of US$820.

CPM Group: Silver Price Could Reach US$50 Again
How (and Why) to Invest on the ASX
Europe’s Graphite Supply Chain ― Key Facts
Types of Graphite: Amorphous, Flake and Vein