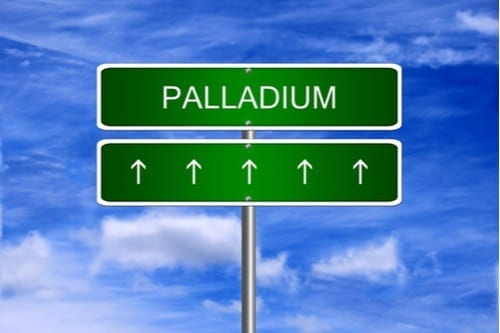 The spot price of palladium has rocketed up since the beginning of the year, gaining 36.5 percent since January.

The palladium price has rocketed since the start of the year, gaining 36.5 percent since January.

The precious metal started the year at US$1,287 per ounce, and after making significant gains reached an all-time high of US$1,784 in mid-October.

Save for a brief period in August, the price has trended upward month-over-month, causing analysts to speculate that the metal will move even higher as tighter environmental regulations in the auto sector prompt car manufacturers to raise the amount of palladium in catalytic converters.

Eighty percent of all palladium produced goes to the auto sector, and since early October car makers everywhere have been increasing purchases in order to adhere to more rigid rules.

Mitsubishi (OTC Pink:MSBHF,TSE:6503) analyst Jonathan Butler told Reuters earlier this month he sees the white metal hitting the US$2,000 range in the next 12 to 18 months.

That forecast is music to the ears of global palladium companies that are positioned to capitalize off the gains the precious metal is making.

For example, the uptick in value has been positive for diversified company Ivanhoe Mines (TSX:IVN,OTCQX:IVPAF). It says its Platreef project, which contains palladium, platinum, rhodium, nickel, copper and gold, has seen its worth increase to a new “multi-year high.”

Three of the metals at the South African asset — palladium, nickel and rhodium — have been 2019’s top-performing metals, the company noted recently.

“The platinum-to-palladium ratio at Platreef is approximately 1:1, and Platreef has remarkably high concentrations of nickel and copper,” an Ivanhoe announcement reads. “At current prices, palladium and nickel comprise more than 60 percent of the weighted price of the ‘basket’ of metals in Platreef’s ore.”

According to an indicated mineral resource, Platreef hosts approximately 26.8 million ounces of palladium, 4.1 billion pounds of nickel and 3.1 million ounces of rhodium, as well as sizable deposits of the other metals identified at the site.

“Platreef is a massive, high-grade, long-life deposit that will produce a suite of vital metals, many of which are essential to sustain our urbanizing planet,” said Co-chairman Robert Friedland. “The nickel and copper by-products are essential in the electric car revolution, and platinum and palladium are equally vital for hydrogen fuel cell technology and catalytic converters to clean the air.”

Generation wants to assess the project using the current palladium price as a benchmark. A previous study used a palladium price of US$500, which is US$1,200 less than the present value.

“We are looking forward to an evaluation of this project at much higher palladium prices than in any previous studies,” President and CEO Jamie Levy said. “The two year trailing average price of palladium is now near US$1,200 per ounce, and the spot price is near US$1,700 per ounce.”

The explorer acquired its 51 percent stake in the project from sector major Sibanye-Stillwater (NYSE:SBGL) in July, with the option to increase its share in Marathon to 80 percent if it spends US$10 million over a four year period.

The company expects the PEA, which is underway, to be complete before the year is over.

The deal, worth C$1 billion, is believed by some analysts to be a bargain for the well-known deposit with both an underground and open-pit mine.

“It makes good sense for Impala Platinum to make a bid for North American Palladium, which is an important, strategic, long-life asset that is generating robust economic returns. If Impala can successfully close the acquisition, it will be a game changer for them,” Ralph Aldis, portfolio manager and senior mining analyst at US Global Investors (NASDAQ:GROW), told the Investing News Network.

It will be interesting to see what other mergers and new projects will come to light if the price of palladium continues its upward trajectory.