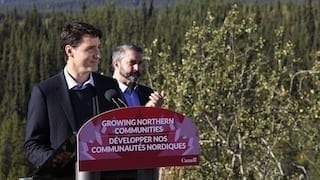 Canadian Prime Minister Justin Trudeau and Yukon Premier Sandy Silver announced the news at a press conference this past weekend.

A combined $360 million in federal and territorial funding will be used to improve road access in two mineral-rich areas of Canada’s Yukon territory.
The announcement was made at a Saturday (September 2) press conference during Justin Trudeau’s first visit to the Yukon as prime minister. The federal government will contribute $247,381,000 to the project, said Trudeau, while the Yukon government will provide $112,802,000.
Called the Yukon Resource Gateway Project, the initiative will focus on the Dawson Range in Central Yukon and the Nahanni Range Road in Southeastern Yukon. It will help upgrade over 650 kilometers of road and build or replace numerous bridges, culverts and stream crossings.


Give me my free report!
In the Dawson Range, updates will be made to four separate public road systems. Improvements to the Nahanni Range Road will include upgrades from its junction with the Campbell Highway to the border between the Yukon and the Northwest Territories.
“Modern infrastructure is key to developing and properly managing the incredible natural resources we have at our fingertips,” said Trudeau in a press release. “By providing easier access to important resources across Yukon, the Yukon Resource Gateway Project will help create good, middle class jobs, promote long-term economic prosperity, and support a strong, sustainable North.”
Yukon Premier Sandy Silver also spoke positively about the plan, commenting, “Resource Gateway is one of the most significant projects ever undertaken in this territory and will have an incredibly positive impact on the Yukon economy. I’m pleased to see the Government of Canada’s commitment to the Resource Gateway project. With this commitment, we will continue working with First Nations to complete the project agreements.”
Resource development is a priority for the Yukon government, which spends more money per capita than any other Canadian jurisdiction on direct financial incentives for mining exploration. In addition, it provides financial incentives for mining companies, and prides itself on having transparent regulations. The main metal mined in the Yukon is gold, along with zinc, copper, tungsten and others.
A Canadian Press article notes that several mines currently in development are located along the Dawson Range. Those include Goldcorp’s (TSX:G,NYSE:GG) Coffee gold project and Western Copper and Gold‘s (TSX:WRN,NYSEMKT:WRN) Casino copper-gold project. Golden Predator Mining (TSXV:GPY) indicates in a press release that its 3 Aces gold project is the only advanced exploration project on the Nahanni Range Road.
That said, Samson Hartland, executive director of the Yukon Chamber of Mines, has emphasized that the Yukon Resource Gateway Project will have a wide-ranging impact. “This is a visionary investment,” he told the news outlet. “This is not about three or four specific mining projects. This is about unlocking Yukon’s mineral potential.”
Many companies operating in the territory are part of the Yukon Mining Alliance, a strategic alliance of leading exploration, development and mining companies in the territory. Goldcorp and Western Copper and Gold are both members, as are: Alexco Resource (TSX:AXR,NYSEMKT:AXU), ATAC Resources (TSXV:ATC), Strategic Metals (TSXV:SMD), Victoria Gold (TSXV:VIT), Wellgreen Platinum (TSX:WG), Banyan Gold (TSXV:BYN), Independence Gold (TSXV:IGO), Metallic Minerals (TSXV:MMG), Rockhaven Resources (TSXV:RK) and Triumph Gold (TSXV:TIG).
A number of those companies are pursuing projects in the White Gold District, which caught attention late last year when Agnico Eagle Mines (TSX:AEM,NYSE:AEM) paid $14.52 million for an almost 20-percent stake in newly formed White Gold (TSXV:WGO); Kinross Gold (TSX:K,NYSE:KGC) has a similar-sized interest in White Gold. Other players in the White Gold District include: Antioquia Gold (TSXV:AGD), Comstock Metals (TSXV:CSL), Eureka Resources (TSXV:EUK), Golden Predator Mining, Goldstrike Resources (TSXV:GSR), Stakeholder Gold (TSXV:SRC) and Trifecta Gold (TSXV:TG).
Photo via the Prime Minister’s Office.
Don’t forget to follow us @INN_Resource for real-time updates!
Securities Disclosure: I, Charlotte McLeod, hold no direct investment interest in any company mentioned in this article.
Editorial Disclosure: Comstock Metals, Eureka Resources, Golden Predator Mining, Stakeholder Gold, Triumph Gold and Western Copper & Gold are clients of the Investing News Network. This article is not paid-for content.

How the US Section 232 Probe Could Impact the Vanadium Market
Demand for Canadian Organic Foods Creating Opportunities in the Organic Fertilizer Industry
The Safest Play in the Mining Space Right Now?
Coronavirus Round-Up: US Consumer Spending Sinks in April

3 responses to “$360-million Investment to Support Yukon Mine Development”