Since entering into the option agreement to acquire 100 % of Beschefer (see Wallbridge Press Release dated October 17, 2018), Wallbridge’s exploration team has carried out a systematic review of historic drill core and project data to better understand the controls on gold deposition and, most importantly, the formation of high grade domains within the B-14 shear zone. This work was in preparation for resource drilling and future maiden resource estimation.

Wallbridge’s initial drill program, has commenced and will consist of approximately 1,500 metres of surface drilling and is designed to test the continuity of two known high-grade shoots within the B-14 shear.

“The relatively wide-spaced drilling carried out by previous operators has already defined a mineralized system, the continuous large-scale gold-bearing structure known as the B-14 Zone. Several high-grade domains within this shear zone highlight the excellent grade potential that exists in this system,” stated Marz Kord, President & CEO of Wallbridge. “Following our strategy of building a gold production pipeline in the emerging Sunday Lake-Selbaie Belt, our initial objective is to prove the continuity of discrete high-grade shoots and to continue the same exploration success as at Fenelon.  If this initial program is successful, we will be planning for a more aggressive resource expansion program and the completion of a maiden resource estimate.”

The Beschefer Project covers 647 hectares and is located in the Northern Abitibi Greenstone Belt, 14 km east of the past-producing polymetallic Selbaie Mine, 45 km northeast of the Casa Berardi Mine and 28 km from Wallbridge’s Fenelon Gold Property. Historically, the area has mainly been explored for volcanogenic massive sulfide deposits similar to the Matagami camp and the Selbaie Mine.

Gold mineralization was discovered in the B-14 Zone in 1995 by Billiton Canada Inc. and the property has seen very limited exploration before the involvement by Excellon in 2011, which completed approximately 17,000 metres of drilling up to 2013. Excellon’s programs produced very positive results, extending the B-14 mineralization down to almost 600 metres vertical depth, discovering the upper shear zone and intersecting the highest-grade intersections on the property, including 55.63 g/t Au over 5.57 metres and 13.07 g/t gold over 8.75 metres. Excellon’s primary focus is on production and exploration at its Platosa Mine and Miguel Auza Property in Mexico. There has been no exploration at Beschefer since 2013.

A summary of historic drill hole results is reported in Table 1 and Figure 1 below. 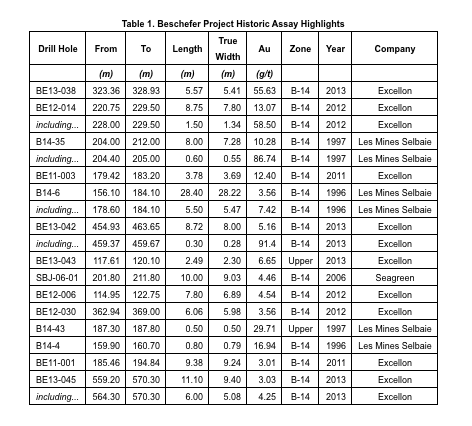 Wallbridge is establishing a pipeline of projects that will support sustainable production and revenue as well as organic growth through exploration and scalability.

Wallbridge is currently developing its 100%-owned high-grade Fenelon Gold property in Quebec with ongoing exploration and a bulk sample in 2018. Wallbridge is also pursuing other additional advanced-stage projects which would add to the Company’s near-term project pipeline. These discussions benefit from the operating capabilities Wallbridge demonstrated by safely and efficiently mining the Broken Hammer deposit in Sudbury, which was completed in October 2015. As part of this strategy, the Company recently optioned the Beschefer Project, an advanced gold property with proven size and grade-potential near Fenelon Gold. Wallbridge is also continuing partner-funded exploration on its large portfolio of nickel, copper, and PGM projects in Sudbury, Ontario, with a focus on its high-grade Parkin project.

Wallbridge also has exposure to exploration for copper and gold in Jamaica and British Columbia through its 11.3% ownership of Carube Copper Corp. (CUC:TSX-V, formerly Miocene Resources Limited, a Wallbridge spin-out of its BC assets).

This press release may contain forward-looking statements (including “forward-looking information” within the meaning of applicable Canadian securities legislation and “forward-looking statements” within the meaning of the US Private Securities Litigation Reform Act of 1995) relating to, among other things, the operations of Wallbridge and the environment in which it operates. Generally, forward-looking statements can be identified by the use of words such as “plans”, “expects” or “does not expect”, “is expected”, “budget”, “scheduled”, “estimates”, “forecasts”, “intends”, “anticipates” or “does not anticipate”, or “believes”, or variations of such words and phrases or statements that certain actions, events or results “may”, “could”, “would”, “might” or “will be taken”, “occur” or “be achieved”. Wallbridge has relied on a number of assumptions and estimates in making such forward-looking statements, including, without limitation, the costs associated with the development and operation of its properties. Such assumptions and estimates are made in light of the trends and conditions that are considered to be relevant and reasonable based on information available and the circumstances existing at this time. A number of risk factors may cause actual results, level of activity, performance or outcomes of such exploration and/or mine development to be materially different from those expressed or implied by such forward-looking statements including, without limitation, whether such discoveries will result in commercially viable quantities of such mineralized materials, the possibility of changes to project parameters as plans continue to be refined, the ability to execute planned exploration and future drilling programs, the need for additional funding to continue exploration and development efforts, changes in general economic, market and business conditions, and those other risks set forth in Wallbridge’s most recent annual information form under the heading “Risk Factors” and in its other public filings. Forward-looking statements are not guarantees of future performance and such information is inherently subject to known and unknown risks, uncertainties and other factors that are difficult to predict and may be beyond the control of Wallbridge. Although Wallbridge has attempted to identify important risks and factors that could cause actual actions, events or results to differ materially from those described in forward-looking statements, there may be other factors and risks that cause actions, events or results not to be as anticipated, estimated or intended. Consequently, undue reliance should not be placed on such forward-looking statements. In addition, all forward-looking statements in this press release are given as of the date hereof.

5 Top Weekly TSXV Stocks: ReconAfrica Jumps Over 100 Percent
Best Gold Stocks on the TSX
Europe’s Bid to Become Climate-Neutral by 2050 and What it Means for the EV Industry
Top Canadian Rare Earths Stocks