VVC Exploration Corporation (“VVC” or the “Company”) (TSXV:VVC) is today releasing additional data specific to the Concha Zone which forms part of the updated Resource Estimate (“Resource Estimate”) contained in the News Release of March 21, 2019.

VVC Exploration Corporation (“VVC” or the “Company”) (TSXV:VVC) is today releasing additional data specific to the Concha Zone which forms part of the updated Resource Estimate (“Resource Estimate”) contained in the News Release of March 21, 2019.

The Concha Zone of VVC’s Samalayuca Copper Project is shown expanded from Figure 1 below with the associated Resource Estimate data displayed in Table 1 below. 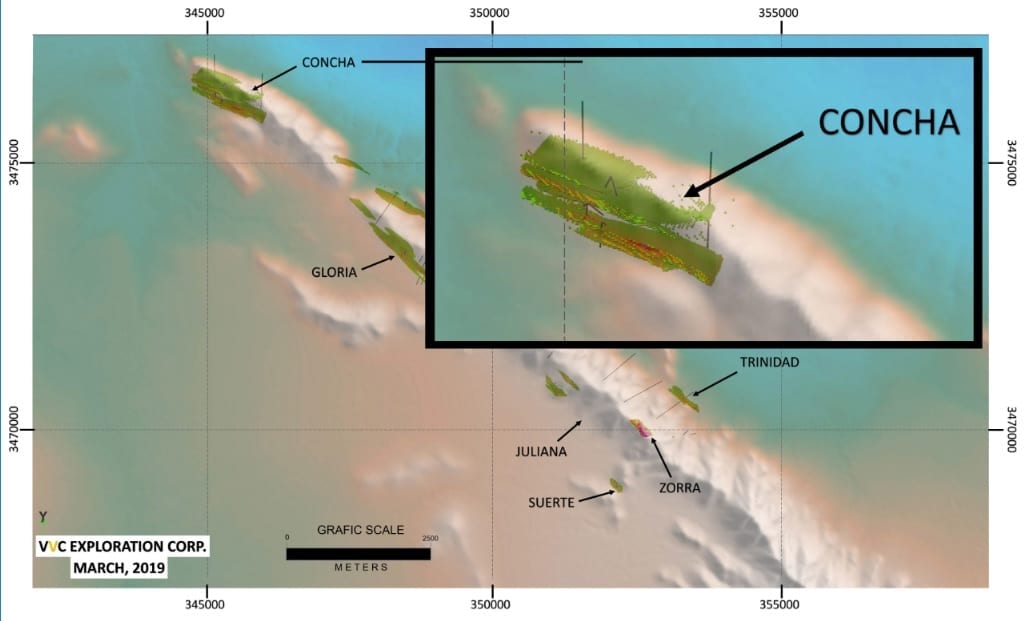 Drilling at La Concha in the 2017/18 drilling campaign was limited and the zone appears to be open to the north west, southwest and at depth with further drilling / exploration a priority to define additional copper resources.

VVC President Jim Culver commented, “This updated Resource Estimate is just the beginning.  More exploration is required, however the Resource Estimate gives us (i) data leading us toward considering the possibility of a Pilot Mine should the economic viability and technical feasibility be established, (ii) a roadmap for further exploration, and (iii) an idea of the overall prospects of the Samalayuca Project.”

The Base Case of the Resource Estimate, at a cut off of 0.15% copper, gives: indicated – 21.03 million pounds of copper; inferred – 36.15 million pounds of copper, with La Concha representing 35% of the Indicated Resource and 40% of the inferred Resource, as reported in our Press Release of March 21, 2019.  As La Concha represented only 10% of the drill holes (6 of 60), the area requires further exploration to better define the resource especially since the Zone is open to the West, East, South and at depth, thereby greatly increasing the potential for a significant increase in mineralization.

A sensitivity analysis of the mineral resource was completed at various cut-off grades from 0% to 0.30% Cu with the Base Case determined to be at 0.15% cut-off grade.  Base Case Copper results for La Concha are shown in Table 1 below.

Technical Oversight
The technical and scientific content of this press release has been reviewed and approved by Jacques Marchand P. Eng. Geology, as the independent qualified person responsible for the resource calculations and associated National Instrument (NI) 43-101 report, and Peter M. Dimmell, BSc., P.Geo. (NL, ON), VVC Director and Qualified Person as defined by NI 43-101.

About VVC Exploration Corporation
VVC is a Canadian exploration and mining company focused on the exploration and development of copper and gold deposits in Northern Mexico, mainly the Samalayuca copper property in northern Chihuahua State.  VVC has other projects in Mexico and Canada, including gold / silver prospects, Cumeral and La Tuna, in Sonora and Sinaloa States, Mexico and a grassroots gold/VMS prospect in the Timmins area of northern Ontario.