Unigold Inc. (“Unigold” or the “Company”) (TSXV:UGD) is pleased to announce additional results from two drill holes targeting gold-rich massive sulphide mineralization at the Company’s 100 percent owned Neita Concession in the Dominican Republic. These holes were drilled primarily to collect sample material for a metallurgical test program to be completed in 2020 and to improve the confidence in the existing resource model. Exploration drilling, targeting the depth extensions of mineralization, commenced in mid-November.

Joe Hamilton, Chairman and CEO of Unigold notes: “These latest holes confirm the continuity of the massive sulphide mineralization. More importantly, the results show minimal grade variation within the massive sulphide which results in startlingly consistent gold and copper grades with no discernable nugget effect and little need for cutting assays. Both of our drills are now operating on a 24/7 basis. We completed 1400 meters of drilling in October with average drill productivities of 52 m per day and 25 m per day for sulphide and oxide drilling respectively. Now that the phase 1 drilling has been completed, both drills have shifted focus towards tracing the depth and strike extensions of this high-grade mineralization. Exploration will initially target the depth extensions and explore the footwall for stockwork and feeder zones before stepping out to probe the eastern extensions. Exploration drilling will continue until the late December. On behalf of the Board and all the shareholders of Unigold, I would like to thank our staff in the Dominican Republic for their dedication and persistence in commencing this exploration program in record time with a clear safety record. Their professionalism and commitment is our biggest asset.”

(1) All intervals are reported as drilled length not true width. There is insufficient data at this time to estimate true width.
(2) MS denotes massive sulphide mineralization.
(3) NSV denotes No Significant Values

LP19-132M was drilled to bisect holes LP15-95 and LP19-131M (5.67 g/t Au and 0.4 percent Cu over 25 m; PR2019-10, Nov 12, 2019)(Figure 1). This hole intersected three distinct zones of massive sulphides. A broad, unmineralized, late mafic dike separates the upper two zones between 262.00 m and 287.30 m downhole. The dike has also been observed in holes LP15-95 and LP19-131M and is interpreted to be sub-vertical, likely emplaced along a sub-vertical fault. The massive sulphide mineralization appears reasonably flat lying and is disrupted by both flat lying and sub-vertical faulting. 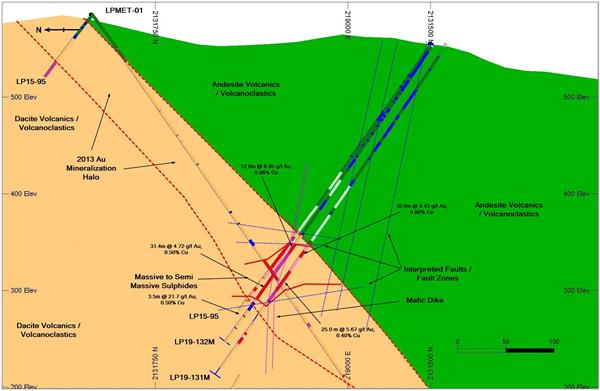 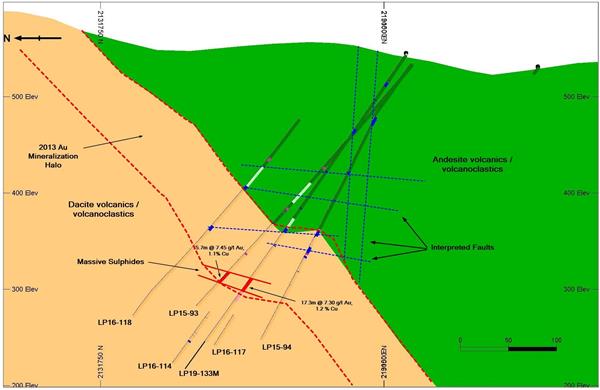 A histogram of the results to date indicates that gold within the massive sulphide defines a generally symmetrical population with the data evenly distributed about the median (Ref Figure 3.0). There is a slight tail of high grade results with six instances of gold grades greater than 15.0 g/t. 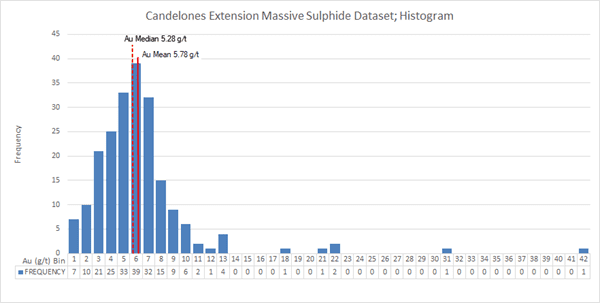 Outlier analyses suggests only one of the 210 results to date would be considered an outlier at 41.20 g/t Au.

Two additional anomalies (Target B and C – Ref. Figure 4.0) were also identified; both appear to be sub-vertical, polymetallic zones that returned highly anomalous zinc, silver, lead, copper and gold. Both of these targets show epithermal-style alteration signatures and remain open at depth. 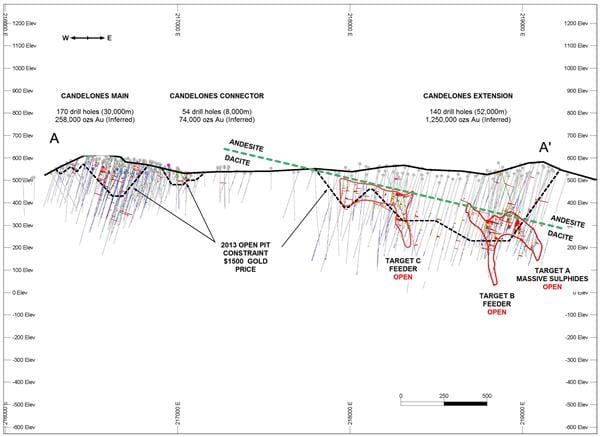 Diamond drilling utilizes both HQ and NQ diameter tooling. Holes are established using HQ diameter tooling before reducing to NQ tooling to complete the hole. The core is received at the on-site logging facility where it is, photographed, logged for geotechnical and geological data and subjected to other physical tests including magnetic susceptibility and specific gravity analysis. Samples are identified, recorded, split by wet diamond saw, and half the core is sent for assay with the remaining half stored on site. A minimum sample length of 0.3 meters and a maximum sample length of 1.5 metres are employed with most samples averaging 1.0 meters in length except where geological contacts dictate. Certified standards and blanks are randomly inserted into the sample stream and constitute approximately 5-10 percent of the sample stream. Samples are shipped to a sample preparation facility in the Dominican Republic operated by Bureau Veritas. Assaying is performed at Bureau Veritas Commodities Canada Ltd.’s laboratory in Vancouver, B.C. Canada. All samples are analyzed for gold using a 50 gram lead collection fire assay fusion with an atomic adsorption finish. In addition, most samples are also assayed using a 36 element multi-acid ICP-ES analysis method.

Wes Hanson P.Geo., Chief Operating Officer of Unigold Inc., has reviewed and approved the contents of this press release.

About Unigold Inc. – Discovering Gold in the Caribbean

Unigold is a Canadian based mineral exploration company traded on the TSX Venture Exchange under the symbol UGD, focused primarily on exploring and developing its gold assets in the Dominican Republic.