Triumph Gold Corp. is pleased to announce results from the final three holes of the 2019 drill campaign on its Freegold Mountain Property.

Triumph Gold President, Tony Barresi (Ph.D., P.Geo.), comments: “We are now even more convinced that a buried gold-rich porphyry system exists beneath the six kilometre long Revenue-Nucleus soil anomaly. Having completed seven of the deepest holes ever drilled on the property, we now have additional compelling evidence of a buried porphyry in each of the three areas tested, including long intersections of high-grade copper-gold mineralization, bonanza grade gold mineralization, an interpreted cupola (uppermost mineralized portion) of a causative intrusion beneath the WAu breccia, and clasts scavenged from another mineralized cupola 700 metres away in the Revenue Diatreme.”

*** 10 g/t Au top-cut applied to this intersection only

The WAu Breccia is a south dipping tabular body of polymetallic mineralization that, prior to 2019, had been tested to a maximum depth of 200 metres below surface. The 2019 exploration program identified a down-dip extension of the well mineralized WAu Breccia to a depth of approximately 400m, as well as underlying magnetite-chalcopyrite breccia in strongly potassic altered granite (RVD19-02; see PR19-16 dated September 12, 2019). The latter is interpreted as a style of high-temperature mineralization that formed proximal to a causative porphyry intrusion.

Revenue West – Gold- and Copper-Rich Supergene Mineralization, and Evidence of Proximity to a Porphyry Intrusion Cupola

Revenue West, which comprises the western margin of the Revenue Diatreme (Figure 1; approximately 1.35 km to the east of the WAu Breccia), has demonstrated near surface mineralization, observed in outcrop and in core from historical drilling. RVD19-05 and RVD19-07 were both designed to test a buried chargeability anomaly centered approximately 650 metres below surface at Revenue West. Both drill holes crossed the geophysical anomaly, encountering propylitic to potassic altered granite with approximately 1% disseminated sulfides (mostly pyrite with minor chalcopyrite). Although the drill-tested sections of the geophysical anomaly (Big Red) did not represent porphyry-related mineralization zones, both drill holes did intersect porphyry-related mineralization in other portions of the holes. In addition, observations from RVD19-07 suggest proximity to a mineralized cupola zone, similar to what has been interpreted at the WAu Breccia 700 metres to the east.

RVD19-05 intersected potassic altered granodiorite with chalcopyrite and molybdenite bearing quartz and/or biotite-magnetite veins from surface to 126.49m depth. From 126.49m to the bottom of the hole at 771.60m a continuously but weakly mineralized fault zone was intersected. Coherent fault-blocks contain evidence of proximity to a mineralized porphyry system, including mineralized stockwork veining, multiple porphyritic intrusive phases, and potassic, propylitic and phyllic altered rock.

At 416 metres the hole penetrated through the southern margin of the diatreme into propylitic grading to potassic altered granite with magnetite-biotite veins (Figure 3). Several narrow potassic altered quartz-feldspar porphyry dykes and breccia zones yielded gold concentrations up to 2.7 g/t and copper up to 1.46% (Table 2). Strongly altered granite between 515.60 and 521.45m yielded even higher grade assays up to 11.6 g/t Au and 1.81% Cu. Triumph Gold geologists believe that the clasts in the Revenue Diatreme, as well as the discrete potassic altered and mineralized breccia and dykes in the adjacent granite are indications of proximity to the buried porphyry system. The area encompassing the south-central contact between the Revenue Diatreme and surrounding granite is a new high priority area for future exploration targeting the causative intrusion. 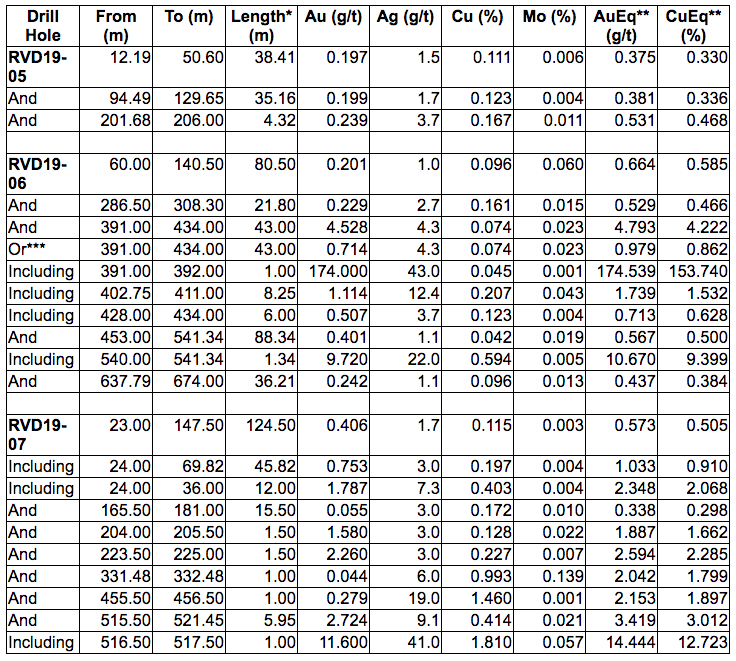 *** 10 g/t Au top-cut applied to this intersection only

Coordinates are given in North American Datum 83 (NAD83), Zone 8

Notes
* Reported assays are uncut weighted averages and represent drilled core lengths. The true width of reported mineralization is unknown.
** Gold equivalent [AuEq], and copper equivalent [CuEq] are used for illustrative purposes, to express the combined value of gold, silver, molybdenum and copper as a percentage of gold or copper.  No allowances have been made for recovery losses that would occur in a mining scenario.  AuEq and CuEq are calculated on the basis of US$2.50 per pound of copper, US$12.70 per pound of molybdenum, US$1,510 per troy ounce of gold and US$17.00 per troy ounce of silver.

Methods and Qualified Person
Drill core samples ranged between 1 and 2 metres length and were cut at Triumph Gold’s core logging facility on the Freegold Mountain Property. The samples were analyzed by SGS Canada of Vancouver, British Columbia. They were prepared for analysis according to SGS method PRP89: each sample was crushed to 75% passing 2mm and a 250g split was pulverized to better than 85% passing 75 micron mesh. Gold was tested by fire assay with atomic absorption finish on a 30g nominal sample (method GE FAA30V5), and samples that tested over 10 g/t Au were retested using a 50g sample and a gravimetric technique. An additional 35 elements were tested by ICP-AES using a four-acid digestion (method GE ICP40Q12), over-limit samples for copper were retested using the same technique but with ore grade four acid digestion and a higher range of detection (method GO_AAS41S100). Quality assurance and control (QAQC) is maintained at the lab through rigorous use of internal standards, blanks and duplicates. An additional QAQC program was administered by Triumph Gold: at minimum three quality control samples, consisting of blanks, certified reference standards and duplicates, are blindly inserted into each 75 sample batch. QAQC samples that return unacceptable values trigger investigations into the results and reanalyses of the samples that were tested in the batch with the failed QAQC sample.

The technical content of this news release has been reviewed and approved by Tony Barresi, Ph.D., P.Geo., President of the Company, and qualified person as defined by National Instrument 43-101.

On behalf of the Board of Directors
Signed “Tony Barresi”
Tony Barresi, President

This news release contains forward-looking information, which involves known and unknown risks, uncertainties and other factors that may cause actual events to differ materially from current expectations. Important factors – including the availability of funds, the results of financing efforts, the completion of due diligence and the results of exploration activities – that could cause actual results to differ materially from the Company’s expectations are disclosed in the Company’s documents filed from time to time on SEDAR (see www.sedar.com). Readers are cautioned not to place undue reliance on these forward-looking statements, which speak only as of the date of this press release. The Company disclaims any intention or obligation, except to the extent required by law, to update or revise any forward-looking statements, whether as a result of new information, future events or otherwise.