Nevada is home to the Carlin Trend, North America’s most prolific gold-producing area and the second-largest known gold resource in the world.

This article was originally published on Gold Investing News on July 29, 2010. 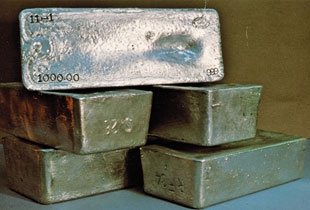 Nevada was given the nickname “The Silver State” around the time it was admitted into the union in 1864. At the time, silver was the primary mineral mined in the state; in fact, up until 1999, Nevada produced about 30 percent of all the silver in the United States.  In the early 1980’s, “The Silver State” moniker was even emblazoned across the state’s license plates. Nowadays, if Nevada were to be given a new nickname, it should be “The Gold State.”
Nevada is home to the Carlin Trend, North America’s most prolific gold-producing area and the second-largest known gold resources in the world after the Witwatersrand in South Africa.  There are numerous sources that estimate the amount of gold contained in the resource, and depending on who you chose to believe, the trend may contain up to 180 million ounces of gold.
The Carlin Gold trend is a belt of gold deposits, primarily in Paleozoic limy sediments, that are about 50 miles wide and 40 miles long. Carlin-style deposits are found around the world. The Carlin Trend in northeastern Nevada was formed when a tectonic crustal block collided with the North American Plate. The pressure and temperature associated with the collision produced hot springs along the suture zone (area of contact between the two plates). Hot springs formed along the suture zone bringing dissolved minerals towards the surface.  These minerals, primarily silver and gold in the case of the Carlin Trend, precipitated along the fissures and faults in the rock. Several episodes of subsurface magmatism occurred subsequent to the collision, adding to the amount of mineral deposition.
Carlin-type deposits have what geologists call “disseminated gold,” which is just a fancy way of saying “spread throughout.”   This type of gold deposit is very low grade.  It generally takes a microscope to see the gold in these types of deposits, which explains why it was overlooked by the early prospectors.  The grade may be low in these deposits, but what they lack in grade they make up for in volume. After the value of these deposits came to the forefront, geologists around the world starting hunting down Carlin- type deposits.
To extract gold from such low-grade deposits miners crush tonnes and tonnes of rock, which is piled into heaps and irrigated with cyanide. The cyanide percolates through the heap, extracting the gold. In the early days of the invisible-gold rush, a tonne of ore might contain a few tenths of an ounce of gold. Today that minuscule amount would be considered high grade.  Cyanide heap leaching- is a technique that was pioneered at the Nevada Carlin trend.
By 2008, mines in the Carlin Trend had produced over 70 million ounces of gold, worth around US$85 billion at 2010 prices.  Open-pit mining was the original technique employed at the Carlin trend, and it is still in use today. In 1994, mining companies began moving underground to exploit the higher-grade ore down-dip from existing open pits. These deeper deposits have been discovered at Rossi, Dee, Meikle, Gold Bug, Rodeo, Deep Post, Deep Star, Turf, Four Corners, West Leeville, Hardie Footwall, Deep Carlin, Mike, Rain, Tess and Rain Extension.
The largest and highest-grade discoveries along the Carlin Trend are associated with major faults. These are very old faults, as are the Cortez faults.  The faults in this area are key to finding gold; as mentioned earlier, the gold precipitated in fissures and faults. Geologists are taking the knowledge they acquired at the Carlin Trend, and applying it to other areas of Nevada, and the world.  The exact ages, and relationships between the faults in the area is not completely understood- as there is considerable agreement regarding the finite details, among geologists.  Despite this, what is and has been discovered at the Carlin Trend is being applied throughout Nevada, and the world.
Currently, there are approximately 30 miners operating in the region. It can be hard to keep up with all the players in the region because acquisitions are common as many of the big boys understand the value one of these juniors may hold, and they are quickly scooped up.  Examples of some miners active in the region:   Allied Nevada Gold (TSX:ANV; AMEX:ANV),  Newmont (NYSE:NEM), and Barrick Gold (NYSE:ABX; TSE:ABX).
The Carlin trend taught the world that “low grade deposits are still quite mineable.”  Exploration is ongoing in Nevada with the Cortez Trend now being rumored to hold the same amount of gold as the Carlin.  This is good news, as the world needs as many explorers out there as possible because to satisfy our hunger for gold, every year we need to find the equivalence of a Carlin Trend.