Radisson Mining Resources Inc.(TSXV:RDS) (OTC:RMRDF) (FRANKFURT:2RX) (“Radisson” or the “Company”) is pleased to announce the release of an updated resource estimate for its 100% owned O’Brien gold project (“O’Brien”) located along the Larder-Lake-Cadillac Break (“L-L-C”), halfway between Rouyn-Noranda and Val-d’Or, two mining towns in the Province of Quebec, Canada (See figure 1 and 2).

Radisson Mining Resources Inc.(TSXV:RDS) (OTC:RMRDF) (FRANKFURT:2RX) (“Radisson” or the “Company”) is pleased to announce the release of an updated resource estimate for its 100% owned O’Brien gold project (“O’Brien”) located along the Larder-Lake-Cadillac Break (“L-L-C”), halfway between Rouyn-Noranda and Val-d’Or, two mining towns in the Province of Quebec, Canada (See figure 1 and 2). The resource estimate was prepared in accordance with National Instrument 43-101 (“NI 43-101”) by independent firm InnovExplo and is dated March 20, 2018. The 36E and Kewagama zones of O’Brien are located within a 1.5 km corridor directly south of the L-L-C. The Vintage zone is parallel to and between 30 to 85 meters (“m”) north of the L-L-C and has now been identified over a strike length of 825 m. Due to their close proximity all zones of the O’Brien gold project could eventually be accessed via same mining infrastructures.

“We are extremely pleased with this substantial increase in resources at the O’Brien gold project. These results come from the work of a high-calibre team supported by a visionary group of shareholders. 94% of the increase coming from the Indicated category supports both the confidence level we have in the geological model of the deposit and the exploration potential that remains to be unlocked at O’Brien,” commented Mario Bouchard, President and CEO.

“The O’Brien project is one of the few low capex, high-grade gold assets left within a stable jurisdiction like Quebec and a historical mining camp like the one of Bousquet-Cadillac. With a limited exploration budget, Radisson’s growing team has done an incredible job advancing O’Brien to this point. The team remains focused on delivering growth to its shareholders by expanding the deposit and unlocking the exploration potential left at O’Brien in a sustainable manner with respect to all stakeholders.”

The Vintage zone is a parallel zone of the O’Brien project located approximately 85 meters north of the L-L-C in the Cadillac Group of meta-sediments comprising sequence of polymictic conglomerate, banded iron formation (BIF) and grauwacke. The Vintage Zone was incorporated in the latest resource update, with 36E and Kewagama zones located in the Piche Group, south of the Cadillac Break. Due to their proximity all zones could eventually be accessed via same mining infrastructures.

Recent exploration work completed on the Vintage Zone helped define the vertical continuity and favourable geometry of the gold system, with presence of quartz veins, arsenopyrite and multiple Visible Gold intercepts. The deepest drill hole completed on the Vintage Zone (OB-17-49) intersected a sulphides rich Banded Iron Formation (10% pyrite and 10% pyrrhotite as opposed to arsenopyrite) which returned 6.9 g/t Au over 4 m. Up to date, this system remains open laterally and at depth.

sensitivity at other cut-off scenarios 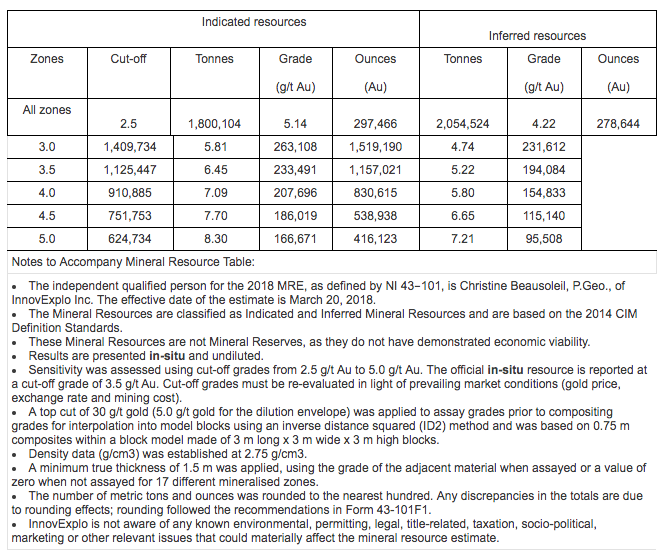 Tony Brisson, P. Geo, independent consultant, acts as a Qualified Person as defined in National Instrument 43-101 and has reviewed and approved the technical information in this press release.

The Independent and Qualified Person for the Mineral Resources Estimate update, as defined by NI 43-101, is Christine Beausoleil, P.Geo., of InnovExplo Inc and confirms she has reviewed this press release and that the scientific and technical information is consistent.

Radisson is a Quebec-based mineral exploration company. The O’Brien project, cut by the regional Cadillac Break, is Radisson’s flagship asset. The project hosts the former O’Brien Mine, considered to have been the Abitibi Greenstone Belt’s highest-grade gold producer during its production (1,197,147 metric tons at 15.25 g/t Au for 587,121 ounces of gold from 1926 to 1957; InnovExplo, April 2015).