Pretium Resources has seen a volatile week on the Toronto main board, due to a disagreement over the methodology of a 10,000-tonne bulk sample. 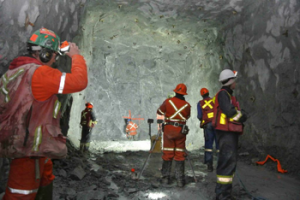 Pretium’s Brucejack project is located about 65K north of Stewart in British Columbia.

Stock in Pretium Resources (TSX:PVG), a BC gold explorer, surged today after losing ground earlier in the week due to a spat between it and a consultant handling the bulk sampling program at Pretium’s Brucejack project.

The reason for the volatility in PVG’s stock price this week can be explained by a controversy between the Vancouver-based company and Strathcona Mineral Services, a consultant it hired to do a 10,000 tonne underground bulk sample at its Valley of the Kings deposit. Strathcona is the same company that famously declared Bre-X to be a scam.

According to Mineweb, Strathcona resigned over differences in methodology with Snowden, Pretium’s chief overseer of the bulk sample test.

“Saying it was caught between consultants, Pretium told Mineweb Strathcona had wanted to use a series of representative tower samples – in which there would far more individual samples, but far less material processed – whereas Snowden wanted to go by the complete milling results [from the 10,000 tonne sample] in a series of crosscuts,” explained Mineweb’s Kip Keen.

What spooked investors was an announcement by Pretium on Tuesday saying that using the tower sampling method, a fifth of the sample averaged just 2.08 grams per tonne gold — which would be uneconomic. Using Snowden’s approach, the result was double, about 4 g/t.

The consultant concluded therefore that “statements included in all recent press releases (by Pretivm) about probable mineral reserves and future gold production (from the Valley of the Kings zone) over a 22-year mine life are erroneous and misleading.”

Not surprisingly, Snowden fought back, defending its November 2012 resource estimate, and said it would involve a third party to peer-review its upcoming resource update.

By then the damage was done, however, with the stock dropping some 28 percent.

In an interview with The Province, Pretium CEO Robert Quartermain said he favors Snowden’s sampling approach of running the entire bulk sample through the mill to see how much gold is there, versus Strathcona’s method of studying a small sample. “It’s a bulk methodology versus one of selectivity,” he told the newspaper.

In another twist to this story, Stockhouse reported on Wednesday that two law firms are investigating Pretium with the potential for class action lawsuits. The Rosen Law Firm and Pomerantz Grossman Hufford Dahlstrom & Gross LLP each sent out statements quoted by the news outlet announcing they are investigating securities fraud claims against Pretium, that it misstated probable mineral reserves.

Pretium’s stock reached a high of $12.92 in March, 2012, before following a downward trend line that looks similar to many gold juniors. The company’s CEO, Robert Quartermain, is a mining industry veteran, whose primary claim to fame is shepherding Silver Standard Resources (TSX:SSO)from a small exploration company with a $2 million market capitalization to a producer with a pipeline of exploration and development properties with a market cap of $1.9 billion. That company is now valued at $520 million.