Orsu Metals Corporation (TSXV:OSU) (“Orsu” or the “Company”) announces the results of a maiden Mineral Resource estimate for its Sergeevskoe Gold Project in Zabaikalsky Region, Russia.

Dr. Alexander Yakubchuk, Director of Exploration of Orsu commented: “The maiden Mineral Resource was identified by Orsu from scratch during just two years of work within approximately 900×600 m area. Orsu now has a robust understanding of the gold grade distribution at Sergeevskoe and will specifically target higher grade areas in order to improve the geostatistical parameters in the higher grade shoots and therefore the average gold grade of the system. While the gold-mineralized system is constrained by the license boundary in the east, it remains widely open westward and to the north. Furthermore, the constructed block model clearly indicates a grade increase with depth in excess of 3 g/t gold.”

Dr. Sergey V Kurzin, Executive Chairman of Orsu commented: “I would like to thank our exploration team for building a solid foundation for the Company. Given that only less than one square kilometer of Orsu’s 7.6 square kilometer property has been drilled so far, a maiden pit and license constrained resource makes an excellent start. Our recent work has generated an abundance of additional targets to be tested in 2019.”

An Inferred Mineral Resource was estimated for a large stockwork, containing 122 segments of sheeted subparallel quartz-tourmaline-sulfide veins in nine domains. The individual vein segments are separated by faults or unmineralized intervals. The most important divide is represented by the Shirotnyi Fault (Figure 1). To its south are Zone 23 West, Zone 23 Middle, Zone 23 East, Adit 5 West, and Adit 5 East domains. To the north are the Intermediate, Klyuchi West, Kozie and Peak Klyuchi domains.

Figure 1. Plan view of Mineral Resource domains and gold grade distribution in the unconstrained block model at Sergeevskoe. Historically recognized mineralization is shown in grey-blue. Klyuchevskoe open pit can be seen to the east. 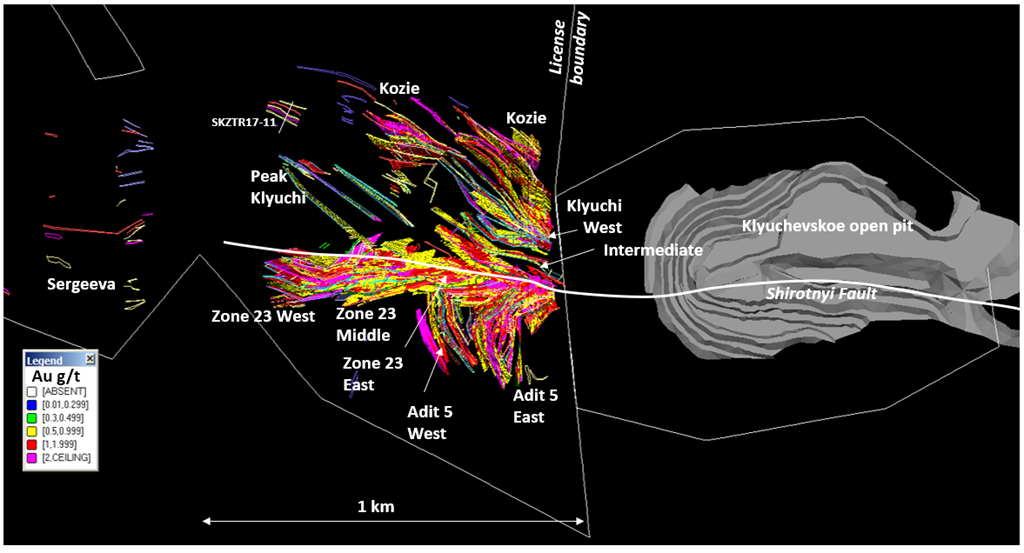 From these domains, an Inferred Mineral Resource of 25.09 million tonnes, grading 1.47 g/t gold and containing 1.19 Moz gold at a 0.5 g/t gold cut-off grade, was optimized into a pit constrained by the license boundary to the east at Sergeevskoe (Table 1). Table 1 also shows sensitivity analysis of tonnage and grade within a pit constrained at different cut-off grades (“COG”) for the Sergeevskoe project, limited by the license boundary Table 1. Open pit Mineral Resource estimate with base case at 0.5 g/t cut off grade and sensitivity analysis of tonnage and grade at different cut-off grades for the Sergeevskoe Gold Project as at 15 April 2019.

Notes: (1) CIM Definition Standards were followed for Mineral Resources; (2) Mineral Resources reported for the Sergeevskoe Gold Project are classified as Inferred by Phil Newall, an independent Qualified Person as defined by CIM Definition Standards; (3) Mineral resources are limited to an optimised open pit shell based on appropriate economic and reasonable mining parameters as provided by Orsu Metals Corporation; (4) Mineral Resources are not reserves until they have demonstrated economic viability based on a Feasibility Study or Pre-Feasibility Study; (5) All figures are rounded to reflect the relative accuracy of the estimate, and apparent errors may occur due to rounding; (6) Contained metal refers to estimated contained metal in the ground not adjusted for metallurgical recovery; (7) The mineral resources reported represent the sub-celled model with no account of potential mining dilution of the mineralisation. 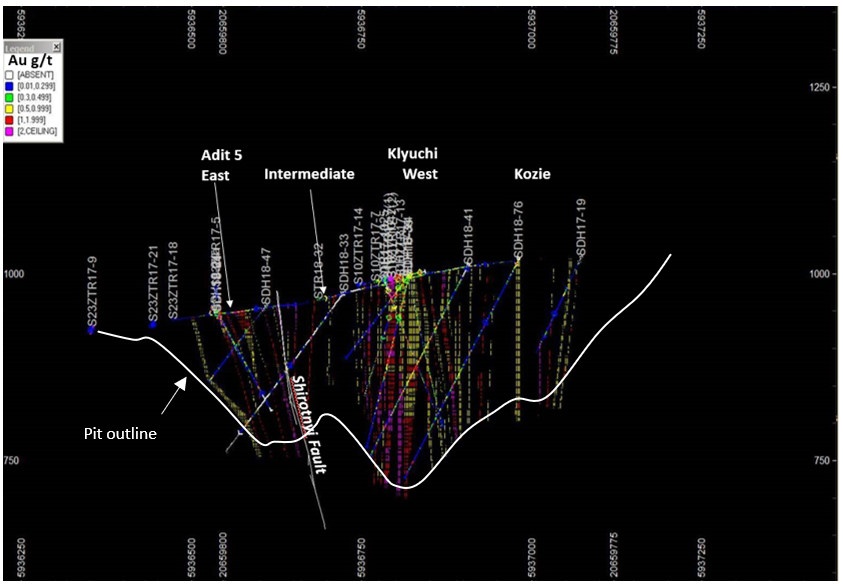 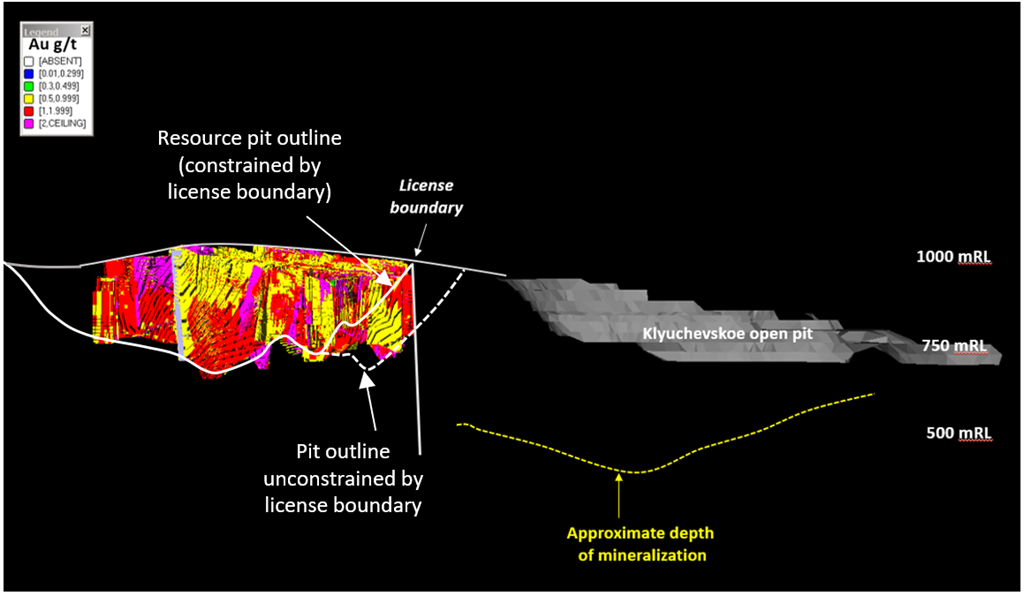 Based on the results, Orsu considers that there is a strong potential to grow the mineralization envelope at the Sergeevskoe Gold Project beyond that identified in this maiden Mineral Resource estimate. The mineralization is open both along the westward strike and downdip. In particular, there is a strong possibility to identify new mineralization at the western continuation of Klyuchi West and Intermediate domains, and only partly drill-tested mineralization in between these domains and Kozie domain. The western extension of Zone 23 remains open, with some gold mineralization recognized in historical holes and by Orsu during scout sampling at the Sergeeva prospect some 500 m west. Peak Klyuchi requires additional attention as a direct continuation of the Intermediate mineral domain. Kozie domain is also open westward, with gold mineralization intercepted in Orsu’s trench SKZTR17-11 (see Figure 1).

In addition, there are numerous occurrences of gold mineralization and geochemical/geophysical anomalies not yet tested by Orsu beyond the area of detailed works within the Company’s 7.6 square km license area of the Sergeevskoe project (see press release dated September 21, 2016).

The Mineral Resource estimate was prepared by WAI under the direction of Phil Newall and Andrey Tsoy. Dr Phil Newall is a Qualified Person as defined by National Instrument 43-101 (“NI 43-101”). Mineral Resources for the Sergeevskoe Gold Project have been prepared in accordance with the guidelines of the JORC Code (2012) and the 2014 CIM Definition Standards by Phil Newall, an independent Qualified Person as defined by the 2014 CIM Definition Standards. WAI has approved this written disclosure of the Mineral Resource estimate.

The Qualified Person has verified the database the Mineral Resource estimate is based on. This verification was done by personal inspection of drill core, drill sites and trenches during site visits in 2017 and 2018, and by checking database content against primary data sources and historical information.

The estimate is based on 17,300 m of diamond drilling (82 drillholes) and 5,300 m of channel sampling (39 trenches), completed during Orsu’s exploration campaign between January 2017 and October 2018. Section lines for drilling are spaced approximately 80 m apart. The vertical spacing between intersections is also typically 80 m. The central part of Zone 23 and eastern part of Klyuchi West were drilled along the section lines spaced approximately 40 m apart. Historical data are completely excluded from the mineral resource estimate.

In the opinion of the Qualified Person, the core and channel samples collected by Orsu are sufficiently accurate and reliable for use in Mineral Resource estimation, and at the time of preparing this mineral resource estimate, there are no known material data quality issues related to drilling, sampling, recovery or other factors.

Intervals identified by Orsu geologists as potentially mineralized were sampled, typically on one-meter lengths. The half-core samples from drill core and channel samples from trenches were assayed in the ALS and SGS Laboratories in Chita for gold and silver, as well some pathfinder elements. Standard QA/QC protocols were followed, including analysis of duplicates and standards and check analyses by ALS and SGS Laboratories in Chita, Russia and in the Stewart Assayers Laboratories in Kara-Balta, Kyrgyzstan, all independent from Orsu. The results of this QA/QC checking will be presented in the forthcoming Technical Report.

A wireframe interpretation of gold-mineralized zones was constructed in all domains at a nominal threshold of 0.5 g/t gold. Based on the limits of the current sampling coverage, the modelled domains have a variable strike length of 300 to 600 m northwest, west-east and southwest. The wireframes were interpreted downdip for up to 300 m as supported by drilling data, but Intermediate domain veins and some others were interpreted only to a depth of some 150 m. Most zones remain open downdip and along strike to the west. The gold-mineralized zones generally dip vertically to 60 degrees, both to the north and southwest, with variable true thickness of 2 to 20 m.

The mineralization is hosted in Permian granite, Jurassic granodiorite porphyry stock and magmatic breccia, intercepted by four types of dykes (diorite porphyry, felsite, hybrid porphyry, and lamprophyre). The dykes are mineralized in their entirety or at least along the selvages. However, most hybrid and all rare lamprophyre dykes are not mineralized at all, post-dating the mineralization. Orsu dated occasional molybdenite specs from the quartz-sulfide vein at the Klyuchi West domain using the rhenium-osmium technique, which corresponded to 159.3+0.7 Ma as defined by ALS Minerals laboratory in Vancouver, Canada. The best mineralized veins were identified in the hosting granite, which is more than 100 m.y. older than gold mineralization.

The mineralization is hosted in closely-spaced and steeply-dipping linear (sheeted) quartz veins and veinlets, forming a stockwork traced to a depth of 300 m, whereas along strike the stockwork forms three major swarms at Adit 5 (in granite and along the granodiorite porphyry dykes), Zone 23 (almost exclusively in granite) and Klyuchi West-Kozie (in granite, granodiorite porphyry stock and magmatic breccia), each traced for a distance of 400 to 900 m. The three swarms merge near the eastern license boundary forming a 500-m-wide mineralized corridor (see Figure 2).

Topography was modelled based on detailed survey performed by Orsu contractors. Drill collar locations were measured with centimetre precision.

The Mineral Resource Estimate was carried out with a 3D block modelling approach using Datamine Studio 3 software. Exploration data were imported and verified before existing geological and mineralisation envelopes were re-defined creating 3D wireframes based on appropriate cut-off grades representing the various mineralised zones seen at Sergeevskoe. Sample data were selected using the geological and mineralisation wireframes and selected samples were assessed for outliers before being composited as the basis for geostatistical study. The wireframe envelopes were used as the basis for a volumetric block model based on a parent cell size of 10m x 10m x 10m. Variogram models were constructed based on composite data and used for ordinary kriging and variogram ranges for using Inverse Power Distance squared (IPD2) as the principal estimation methodology. The resultant estimated grades were validated against the input composite data and classified in accordance with the guidelines of the JORC Code (2012)/CIM Definition Standards and based on an assessment of geological and grade continuity and assay data quality. Mineral Resources were further limited based on an expectation of eventual economic extraction by being constrained within an optimised open pit shell generated using appropriate economic and technical parameters.

For the mineralized domains and the host rocks, a variable density value was used using the formula (Density = – 0.00072 x (Au g/t)2 + 0.1363 x (Au g/t) +2.6687) for converting volumes into tonnages, which correlate with increase in specific gravity and assayed gold values as collected and measured by Orsu. A density factor of 2.65 t/m3 was applied for the oxide material based on measurements by Orsu. A density factor of 2.0 t/m3 was assumed for the poorly consolidated overburden material, averaging 2 m in thickness. All estimated tonnes are on a dry basis.

An oxide surface was constructed 30 m below and in parallel to the topographic surface based on average visually logged depth of oxide in drill core.

The portion of the mineralization model that met the CIM definition of a Mineral Resource (“…reasonable prospects for eventual economic extraction”) was established by using NPV Scheduler software to generate a pit shell to constrain reporting of the near surface resource. The input parameters for the pit shell are shown in Table 2.

Cautionary Statement:All Mineral Resources were classified as Inferred, based on the intersection spacing relative to the interpreted continuity and potential complexity of the deposit. However, some portions of Mineral Resources may formally correspond to the Indicated category, which require further constraining.

The Company is not aware of any legal, political, environmental, or other risks that could materially affect the potential development of the mineral resources.

Alexander Yakubchuk, the Company’s Director of Exploration, Ph.D., MIMMM, a Qualified Person as defined by NI 43-101, has reviewed and approved the exploration information disclosures contained in this press release.
Neither the TSX Venture Exchange nor its Regulation Services Provider (as that term is defined in the policies of the TSX Venture Exchange) accepts responsibility for the adequacy or accuracy of this release.

Click here to connect with Orsu Metals Corp. (TSXV:OSU) for an Investor Presentation.