Northisle Copper and Gold Inc. (TSXV:NCX) (“Northisle” or the “Company”) is pleased to announce the launch of its second exploration campaign at its Pemberton Hills Property, located in British Columbia, subject to a farm-out agreement with Freeport-McMoRan Mineral Properties Canada Inc. (“Freeport”).

Northisle Copper and Gold Inc. (TSXV:NCX) (“Northisle” or the “Company”) is pleased to announce the launch of its second exploration campaign at its Pemberton Hills Property, located in British Columbia, subject to a farm-out agreement with Freeport-McMoRan Mineral Properties Canada Inc. (“Freeport”).

John McClintock, President and CEO of Northisle stated: “We are very pleased with the progress made on our Pemberton Hills Property following the 2018 commencement of its venture with Freeport in early 2018 and with the technical support they have provided. We believe that Freeport’s decision to continue with a second exploration campaign in 2019 demonstrates Freeport’s continued interest in our tenements. Pemberton Hills is one of several early-stage exploration targets on our extensive property holdings in this extensive copper-gold district.”

As shown in the figure above, the geophysical program will test the northern and eastern extensions of advanced argillic alteration located within the same geological terrain that extends west-northwest from BHP Billiton’s past producing Island Copper Mine. The alteration at Pemberton is very similar to that at the nearby Hushamu and Red Dog deposits and in porphyry copper systems found elsewhere in the world.

The initial 2019 exploration program will consist of approximately 24 kilometres of Induced Polarization surveying as well as geological mapping, geochemical and clay studies designed to identify drill targets for a second phase of drilling later in the year.

ABOUT THE PEMBERTON HILLS PROPERTY FARM-OUT AGREEMENT
A farm-out agreement was entered into with Freeport in early 2018, dividing the initial property held by Northisle as illustrated in the figure above. Under the terms of the agreement, as announced on February 26, 2018, Freeport may, at its election, earn up to a 65% interest in the Pemberton Hills Property by funding a total of $23.9 million in exploration expenditures, while Northisle retains a 100% interest in its Hushamu and Red Dog copper-gold deposits and surrounding areas, for which a Preliminary Economic Assessment was published on September 13, 2017. As at December 31, 2018, Freeport spent $1.5 million on the portion of the property subject to its earn-in agreement.

ABOUT THE 100%-OWNED HUSHAMU PROJECT
The 100%-owned Hushamu Project consists of the Hushamu and nearby Red Dog deposits, with Mineral Resources summarized in the below table.

In September 2017, Northisle published the results of a PEA which demonstrated the potential technical and economic viability of the project constructed as an open-pit mine, with a concentrator processing nominally 75,000 tonnes/day (27Mtpa) with the results summarized in the below table. 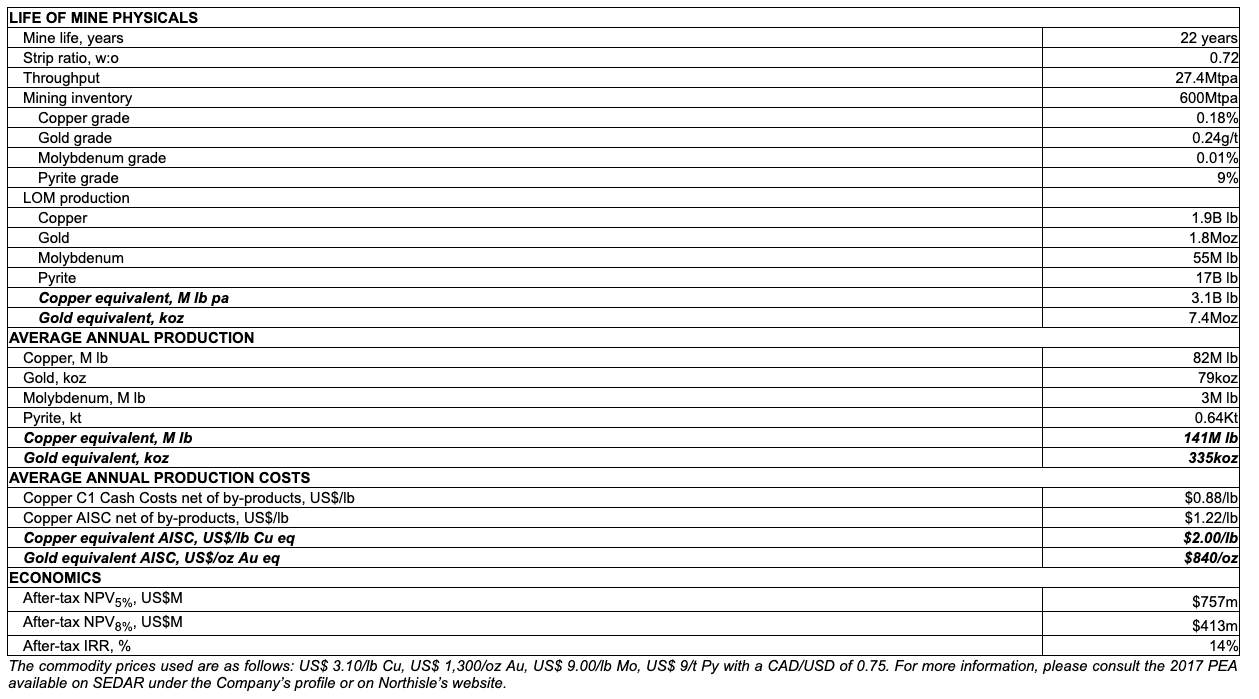 For more information on Northisle please visit the Company’s website at www.Northisle.ca.

John McClintock, P. Eng is the Qualified Person who reviewed and approved the scientific and technical disclosure in this news release.

On behalf of Northisle Copper and Gold Inc.

Click here to connect with NorthIsle Copper and Gold (TSXV:NCX) for an Investor Presentation.