Noble Mineral Exploration Inc. (“Noble” or the “Company”) (TSXV:NOB) (FRANKFURT:NB7) (OTC:NLPXF) is pleased to announce that an orientation type airborne Magnetic Gradiometer survey will commence shortly over a 4 km drill indicated gold trend in Dargavel Township, located in Northern Ontario, Canada. (Figure 1). The Dargavel Property is part of the Company’s ~72,000 hectare Project 81. The Property was previously flown with airborne magnetics and electromagnetics using a 100 m line spacing and north-south flight line orientation. During this survey the Dargavel gold trend was identified as having a moderate magnetic response (due to the presence of iron formation) and discrete EM anomalies (thought to be caused by pyrite and pyrrhotite within the host volcanics). Areas of interest within the trend were noted for possible folding of the iron formation.

The Dargavel drill indicated gold trend contains a number of anomalous gold intersections in historical drill core discovered from drilling dating back to 1965 by INCO. The most significant intersection was encountered in hole 25013 and included anomalous gold over 23.6 ft (locally up to 3.05 g/t Au over 8 ft) and anomalous platinum over 9.6 ft (locally up to 2.86 g/t Pt). Results are historical and non NI43-101 compliant.

The survey will be flown perpendicular to the orientation of the Dargavel gold trend (with flight lines oriented at 45o) at a 50m line spacing, totalling 2,250 line-kilometers, with the objective of detailing the interpreted folded structure(s) within the iron formation and separating the iron formation from numerous magnetic diabase dikes that strike north-south throughout the area and intersect the gold trend, particularly in the area around drillhole 25013. The survey will also cover adjacent areas in Bradburn and Lennox Townships to cover historic drill core intersections of copper and zinc that occur near the border with Dargavel Township.

Noble’s Project 81 is located within the Kidd-Munro assemblage of the western Abitibi Subprovince in Northern, Ontario, and is one of the largest contiguous, underexplored land packages in Ontario. The assemblage is one of the most ultramafic-rich volcanic successions of any age in the world and is hosts to the Kidd Creek VMS deposit, an important example of bimodal-mafic (ultramafic) volcanic-associated massive sulphide (VMS) deposits.

The magnetic gradiometer system will be flown at a lower nominal flight height using closer spaced lines and along a flight direction that provides the greatest resolution of the Dargavel gold trend.

Vance White President &CEO said “we are pleased to get this airborne program underway as the gold trend in Dargavel is under explored, especially in the area around INCO drill hole 25013 where we have anomalous gold and platinum at shallow depth. We will also cover previous intersections of copper and zinc in adjacent townships as we proceed to advance our exploration of Project 81”.

Randy S.C. Singh P.Geo (ON), P.Eng (ON) VP- Exploration & Project Development a “qualified person” as such term is defined by National Instrument 43-101 has verified the data disclosed in this news release, and has otherwise reviewed and approved the technical information in this news release on behalf of Noble. 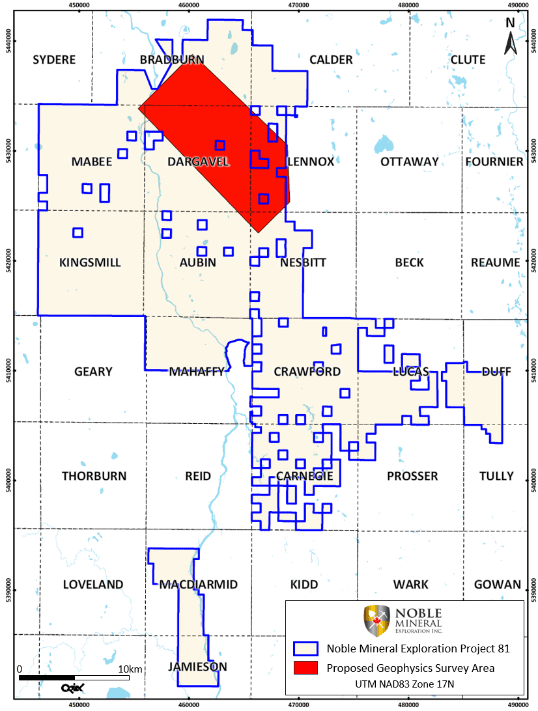 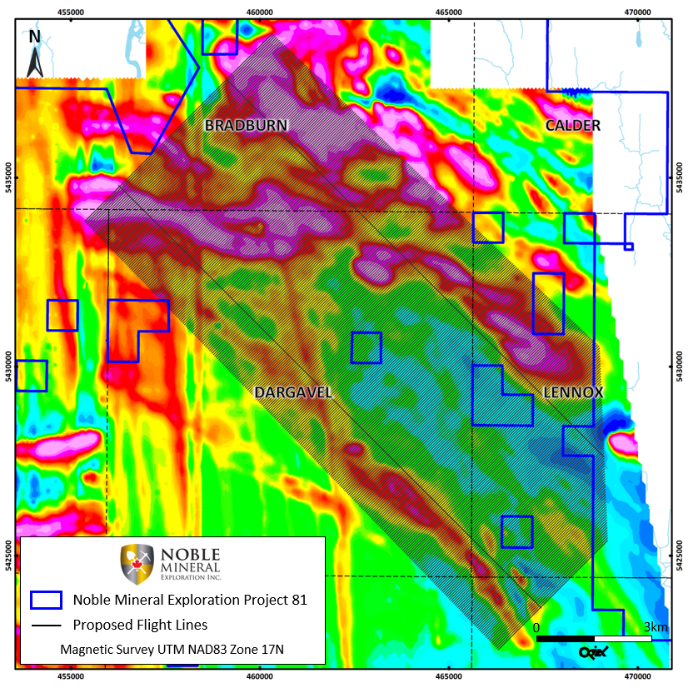 Noble Mineral Exploration Inc. is a Canadian-based junior exploration company which, in addition to its shareholdings in Canada Nickel Company Inc., Spruce Ridge Resources Ltd. and MacDonald Mines Exploration Ltd., and its interest in the Holdsworth gold exploration property in the area of Wawa, Ontario, holds approximately 72,000 hectares of mineral rights in the Timmins-Cochrane areas of Northern Ontario known as Project 81. Project 81 hosts diversified drill-ready gold, nickel-cobalt and base metal exploration targets at various stages of exploration. More detailed information is available on the website at www.noblemineralexploration.com .

BECI was formed in 2001 to develop innovative airborne technology for mineral exploration to allow for direct drilling of targets without the need for ground geophysical follow-up. The Company was involved in the development of the AeroTEM system, offered by Aeroquest International Limited, from 2001 to 2006. In 2010 BECI began the development of AirTEM, a cost competitive, mid-power HTEM system and has since provided systems in Canada, Mexico and China. In 2016 BECI developed a triaxial magnetometer based on the Scintrex CS-3 optical magnetometer which can accept incoming spectrometer data.

Neither TSX Venture Exchange nor its Regulation Services Provider (as that term is defined in the policies of the TSX Venture Exchange) accepts responsibility for the adequacy or accuracy of this release. No stock exchange, securities commission or other regulatory authority has approved or disapproved the information contained herein.

The foregoing information may contain forward-looking statements relating to the future performance of Noble Mineral Exploration Inc. Forward-looking statements, specifically those concerning future performance, are subject to certain risks and uncertainties, and actual results may differ materially from the Company’s plans and expectations. These plans, expectations, risks and uncertainties are detailed herein and from time to time in the filings made by the Company with the TSX Venture Exchange and securities regulators. Noble Mineral Exploration Inc. does not assume any obligation to update or revise its forward-looking statements, whether as a result of new information, future events or otherwise.