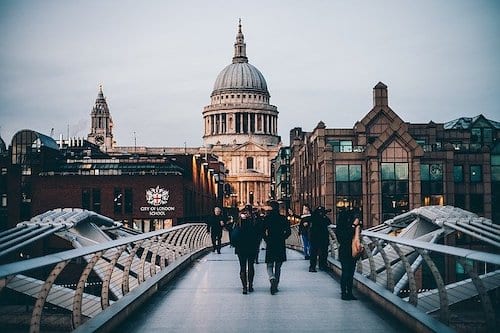 A demonstration outside the Mines and Money London venue spurred discussion of reputation challenges in the mining space.

This year’s Mines and Money London event is over, and for attendees it was a chance to hear from experts, meet with companies and learn about what’s going on in the resource market.

Wednesday (November 27), the third and final day of the show, brought discussions about the mining industry’s reputation, and the conference’s pitch battle winner was revealed in an exciting finale.

Reputation challenges in the mining space

A demonstration from protesters on Tuesday (November 26), the day of Mines and Money London’s Outstanding Achievement Awards and Gala Dinner, sparked an interesting conversation the next morning during the day’s first panel discussion.

The mining industry fat cats pat each other on the back and make billion dollar deals while indigenous communities are killed and displaced and the planet burns. We didn’t make it easy for them at least.#MinesandMoneyLondon pic.twitter.com/369H9x6NaP

The speakers, including Willem Middelkoop of the Commodity Discovery Fund and Jonathan Goodman of Dundee, spoke candidly about the mining industry’s image issues, with Middelkoop saying that part of the problem is that there’s no global mining body that can educate the public.

#MinesAndMoneyLondon‘s first keynote of the day opens with a discussion on the #mining industry’s reputation challenges – Willem Middelkoop of the Commodity Discovery Fund says there’s no world mining body to educate the public.

For his part, Goodman noted that the mining space has in many instances not been a rewarding place to invest, and as a result a slew of good investors have turned their sights elsewhere.

He highlighted excessive promotion and a lack of honesty from companies as problems, saying that companies need to underpromise and overdeliver instead of creating unrealistic expectations. In particular, he pointed to overly optimistic technical reports; instead of being used as valuation tools, they should be used to determine if a project is viable, he said.

“As an industry we have to grow up (and) stop promoting stocks,” Goodman said.

Jonathan Goodman of Dundee notes that #mining hasn’t been a good place to put money – too much promotion and dishonesty has driven away good investors. Better relationships needed between shareholders and company execs #MinesAndMoneyLondon

As a whole, the panelists seemed to agree that it will be difficult for resource companies to attract generalist investors if the industry doesn’t get these and other reputation issues under control.

Commodities driving the future of energy

The third day of Mines and Money London also brought talks on energy, with battery metals like lithium and cobalt taking center stage due to their key roles in the electric vehicle revolution.

What exactly makes a #BatteryMetal? #MinesAndMoneyLondon panelists say the definition is broader than investors might think – #lithium and #cobalt definitely in the mix, but others like #tin and #RareEarths also mentioned. pic.twitter.com/3wpoaJNFtR

Rare earths, whose wide variety of high-tech uses include electric and hybrid vehicle applications, also had time in the spotlight, with Roskill’s David Merriman sharing insight on why it’s been so difficult to establish rare earths assets outside of China. Among other things, he said, the rare earths price spike in 2012 has scared some investors away from the sector.

Merriman also touched on what the US-China trade war could mean for rare earths moving forward. The issue made worldwide news earlier this year when China appeared to be considering leveraging its rare earths dominance against the US. According to Merriman, while the US could theoretically deal with China cutting off its rare earths supply, in practice the situation would not be viable.

Speaking to whether the US could function without #RareEarths from China, Merriman says in theory it would be able to (by sourcing rare earths elsewhere), but in practice it wouldn’t work #MinesAndMoneyLondon

While new energy metals did get the bulk of the attention, Mines and Money London attendees also got to hear about coal and why it will remain a fixture as the world moves toward a greener future.

“Transitioning to clean energy doesn’t mean moving away from coal, it means moving towards technologies that will lead us to the zero-emission targets.
Coal can, and must, be part of the clean energy transition.” Michelle Manook, World Coal Association at #MinesandMoneyLondon pic.twitter.com/QgM2fBl4Tt

And the pitch battle winner is…

The final event at the conference was a Shark Tank-style pitch battle finale. After five heats consisting of four to five companies each, five finalists emerged to compete in front of a fresh panel of judges.

The votes are in and @AmexExploration is the choice from both the judges and the audience! And that’s wrap on #MinesAndMoneyLondon – see you next year! pic.twitter.com/efgp9QB8GY

To get a complete picture of Mines and Money London, click here to read about what happened on day one and click here for details on day two. You can also stay tuned as we begin to post interviews from the show on our YouTube channel.