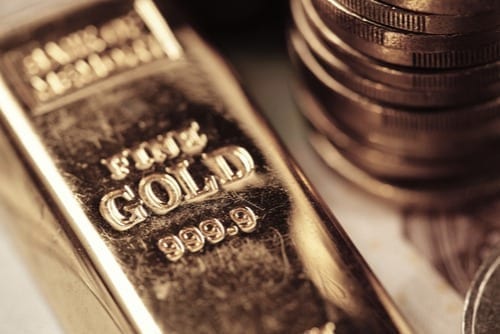 Martin Murenbeeld of Murenbeeld & Co. says investors should continue to hold gold and rely on a diversified portfolio in times of market uncertainty.

At this year’s Mines and Money Americas conference in Toronto, the Investing News Network had the chance to speak with Martin Murenbeeld, president of Murenbeeld & Co., who discussed what happened to gold in Q3 and shared predictions on where he sees it going in both the short and long term.

The yellow metal has experienced two tough quarters this year, and Murenbeeld believes this happened due to a strong US dollar, rising equity markets and an increase in the real bond yield.

“Those are three big strikes against gold,” he noted.

Despite the current conditions, Murenbeeld said that now is not the time to sell — instead, investors should hold gold as part of a diversified portfolio.

“I’m inclined to think that you [would be] selling near the bottom,” he stated.

He added, “my own style is to hold it. I sometimes say tongue in cheek, ‘have some gold in the portfolio and hope it doesn’t go up.’ Because if you’re a diversified investor like myself … the other 90 or 95 percent of the portfolio will rise if gold doesn’t rise. It’s nice to have as insurance, and it’s certainly nice to own it when it does go up.”

Watch to the interview above or read the transcript below for more insight from Murenbeeld, including what he thinks 2019 will look like for gold in terms of supply, demand and prices, what direction he sees the greenback going and his thoughts on the most prominent gold story of 2018.

MM: Great. I had a presentation this morning and spoke for some 40 minutes which … went well. I think they were interested. I gave some numbers for the gold price going forward — not too exciting, some of the numbers. I am somewhat optimistic, but probably more medium and longer term than near term.

INN: So speaking of gold, it had another kind of rough quarter. Can you tell me a little bit about what happened to gold? What factors were affecting the price during Q3?

MM: I would say probably number one is the combination — well, let me back up. Number one, the US dollar went up; number two, the equity markets went up; number three, the real bond yield went up. And we look at the 10-year US tips and it rose as well, so those are three big strikes against gold.

INN: Now, for investors that hold gold, would you say that now is the time to continue to hold it or is now the time to sell?

MM: No, I would not sell now because I am inclined to think that you’re selling near the bottom, and in fact my own style is to hold it. I sometimes say tongue in cheek, “have some gold in the portfolio and hope it doesn’t go up.” Because if you’re a diversified investor like myself … the other 90 or 95 percent of the portfolio will rise if gold doesn’t rise. It’s nice to have as insurance, and it’s certainly nice to own it when it does go up, and if you buy the right sectors of the gold market you have a chance of doing well even though the gold price isn’t going up. So I’m not one to be without gold.

INN: I know we’re talking about investors — what is one piece of advice that you have for gold investors during this current market?

MM: Stay the course. The gold market does have cycles and if you’re really smart, much smarter than I am, you’ll be able to sell at the top and buy at the bottom. I’m not. So I tend to hold a position, and I tend to maybe rotate from one company to another or in and out of companies into gold bullion, and then from gold bullion back into companies. But essentially, I stay with it and I think that that’s what an investor should do. You should look at gold from a long-term perspective. I know that there’s a lot of advice — buy now because gold is going up $100 tomorrow and so forth — that’s all great and if it’s true, great. But the reality is you want to be a longer-term investor in gold.

INN: Looking ahead a little bit, what do you think 2019 will look like for gold in terms of supply, demand and prices.

MM: Well, the first thing on the supply side is that the evidence suggests that the mine output is going to stabilize, maybe even come off a little bit. So on the demand side, I actually don’t look so much at demand — obviously we look at the Chinese demand and Indian demand and it’s reasonably stable. It goes up 100 tonnes or down 100 tonnes over the course of a year, which is not really that critical.

What’s much more critical are the factors underlying demand, which affect investment demand. And so then you get back to certain financial variables, so it’s very important for me if I have a view on the US dollar. Now, Trump wants the dollar to go down, but what he’s doing is actually not helping that. And so one of the things we’re looking for in 2019 is a slight change in course. Hopefully after the trade war there will be some resolution to the overvalued dollar, so we expect a little bit of that to happen.

It’s possible that later in 2019 the Fed starts to worry a little bit more about recession and starts to maybe even draw a halt to the continuing rise in interest rates, and then as the probability of a recession starts to rise, you’re going to have equity markets start to do more hiccups like we saw last week, and that’s quite a positive for gold. So those are three things that I’m particularly interested in, and I think some of that is going to show up.

Behind the scenes, there are some other factors that are very big, like the global debt crisis. There’s no easy resolution to the global debt crisis without some kind of reflation, people like to say monetary debasement. But some way out of the debt crisis without causing serious recession seems to me to be almost impossible. So we’re going to have easier monetary and fiscal policies slowly but surely over time. So it’s very possible that in three or four years we’re going to be looking at maybe US$2,000 gold, something like that.

INN: So then you probably see the US dollar going down in 2019?

MM: The US dollar is — it’s funny. It’s been going up because the background to the dollar at the moment is restrictive, or more restrictive, monetary policy and a rather relaxed fiscal policy. Now that combination of macroeconomic policies is actually quite currency positive because it tends to raise interest rates. It’ll draw capital from abroad because somebody’s got to fund the US deficit, and that leads to a larger trade deficit. So the way we’re going now is the dollar up, but the US trade balance is actually going to get larger. The trade deficit’s going to get larger, which is of course exactly not what the US administration wants.

So there’s got to — we’ve got to come to some kind of a resolution to that. And the only way out of this particular conundrum is if you can have some kind of international agreement that would devalue the dollar. Now that’s happened in the past, and I kind of had hoped that this year we might see more signs of that developing, but that’s not happened. You know, Trump has chosen the route of tariffs, which may have the end result that he’s looking for. But at the moment the tariffs are actually making the dollar a safe haven. So that’s another kind of stripe against gold here.

INN: This will be my final question and just switching gears a little bit. What was one of your favorite gold stories this year, and what did it mean for the gold sector as a whole?

MM: Oh, the favorite gold story. Good question there. There weren’t that many favorable gold stories. This is — yeah, I’m trying to think hard of what … from my perspective something that is favorable is the ongoing shift among central banks towards gold. I think that that’s an important story, but it’s a little bit behind the scenes.

The combination of large currency reserves and the US dollar being a component of those currency reserves, but the US dollar being a liability of the Federal Reserve put some central banks off. They’d prefer not to hold liabilities of the Federal Reserve. And now with Trump in the equation, there are countries that would prefer not to hold any kind of asset that is dependent upon the goodwill of the United States.

So I think in that direction there is some positive — but I mean the ETF sector has actually been bleeding gold a little bit for the first time in several years. For the first time in 15 years or maybe 16 years, the net spec position on the COMEX has turned against gold so this — it’s hard to look for, so you tell me what you thought was the — what did you think was the big story? I mean, Barrick Gold (TSX:ABX,NYSE:ABX) buying Randgold Resources (LSE:RRL).

MM: Yeah, that’s not in my sphere. That — you’ve got to speak to the gold equity investors for that.

INN: Okay. And do you think this is a trend that will continue in 2019 — like when you were saying that there is a shift with the banks?

MM: Oh yeah. That is going to continue for sure. I think the Russians have made that very clear. The Chinese are not publishing any new buying of gold for their reserves, but I think underneath it they are. And I think other countries that — it gets complicated because certain countries want to do certain financial transactions, which includes the SWIFT system internationally, and then the US has a chance of blocking these accounts like Iran and other countries. And so … it’s coming down to a situation where a central bank or a government might say, “you know what? Let’s not have too many US dollars because we could get blocked because the US administration doesn’t like us,” or that sort of thing.

6 responses to “VIDEO — Martin Murenbeeld: Now is Not the Time to Sell Gold”