Gold bugs are smiling this week, especially after the price of gold surged ahead to a four-month high breaking past $1,150 an ounce Wednesday despite relative dollar strength and the bearish voices heard throughout the market last week. 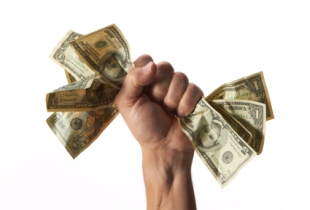 Gold bugs are smiling this week, especially after the price of gold surged ahead to a four-month high breaking past $1,150 an ounce Wednesday despite relative dollar strength and the bearish voices heard throughout the market last week.

Early Thursday, gold slipped a bit on profit-taking and further dollar strength, but managed to turn around and gain back those losses making another run past the $1,150 level.

Although gold is ignoring the dollar for the most part this week, price movements for the precious metal are still driven by the currency markets. This time, the euro is having more of an influence.

Growing fears over the financial health of euro zone economies like Greece are encouraging many European investors to drop the euro for the perceived safety of gold as well as the dollar.

According to Pradeep Unni, Richcomm Global Services senior analyst, what we’re witnessing is “a clear de-coupling of the inverse correlation between the dollar and gold  . . . on the back of the current chaos in euro zone.” The gold price in euros reached an all-time record high of 863.38 Wednesday.

Greece’s debt troubles continue to take center-stage in the gold story. Traders are speculating the nation may default on its debt, creating a flood of wealth into hard assets like gold. The possibility of default moves more toward reality everyday as Greek bonds continue to slip, a sign “the life preserver that was tendered to the country last week is deflating before it could be of use,” says Kitco metals analyst, Jon Nadler.

Gold is also garnering support from record low interest rates at the European Central Bank and the Bank of England.

The bullish sentiment missing from the market last week is back and so is Jim Rogers with his forecast of $2,000 an ounce gold. In a recent interview with Bloomberg Television, Rogers advised investors not to sell gold, which he expects to hit the $2,000 mark “by the end of the decade.”

For those looking for a more short-term forecast, optimistic analysts see gold capable of challenging the over $1200 an ounce highs we saw earlier this year. “Gold may look to base build around the $1,145 level short-term,” said TheBullionDesk.com analyst James Moore. “However, we expect sentiment to remain bullish with gold on course to challenge the year’s high of $1,162.10 and potentially the $1,200 level.”

Fu Chunjiang, China Southern Futures analyst, points out that while we should expect “bouts of profit-taking,” gold’s uptrend is safe as long as European investors continue to “seek safety from uncertainties.”

Realists like Nadler are quick to warn investors not to forget about the dollar, which is expected to grow stronger once the US raises interest rates. “At some point gold players chasing technical buy points may not be able to withstand the pressure coming from its show of strength,” he warns.

The Canadian miner said Thursday that its Kumtor mine operations were never disrupted or at risk and that the share price drop was merely a normal reaction to nervousness in the market. “We haven’t seen any impact on our ability to move people or supplies back and forth from the mine. The mine is still operating,” said company spokesman, John Pearson.

The Kyrgyz government is a 33 percent shareholder of Centerra Gold, which owns the Kumtor mine. The operation is reportedly the largest gold mine held by a western company in Central Asia. The mine is expected to produce over 500,000 ounces of gold in 2010.