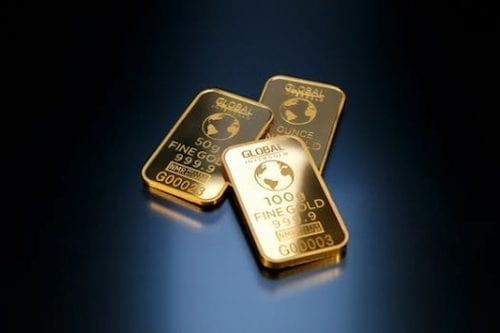 In its latest report on gold demand, the WGC says demand for the yellow metal was down 4 percent in the second quarter and experienced the lowest first-half total since 2009.

The World Gold Council’s (WGC) Gold Demand Trends report for Q2 2018 has been released, and it shows global gold demand fell 4 percent in the second quarter, with total demand coming in at 1,959.9 tonnes in H1, down from 2,086.5 tonnes this time last year.

With demand experiencing the lowest first-half total since 2009, the report notes that the main reason for the decline was due to slower ETF inflows, stating, “ETF inflows have steadied at low levels in recent quarters, making for weak year-on-year comparisons.”

Overall, ETF inflows steadied at low levels, jewellery demand slumped 2 percent and bar and coin demand was flat. Meanwhile, central banks slowed their buying, which allowed for 7 percent decline in the second quarter. Providing some relief was technology demand, which was up 2 percent to reach a three-year high. Read on to learn more about what the WGC says in the report.

1. ETFs were down year-on-year

“[Half-year] inflows of 63 tonnes were the lowest since the first half of 2015, despite mounting global trade tensions and relatively volatile stock markets. By the end of H1, global holdings stood at 2,434.3 tonnes,” the WGC states.

The group also notes that unlike trends in Q1, inflows in Q2 were directed towards European-listed funds while North American funds saw net outflows. WGC explains that this occurred due to the easing of political tensions allowing for the US economy to show continued improvement, taking the momentum out of US inflows.

WGC states, “[at] the same time, Europe saw political instability escalate, and this – in conjunction with a marked depreciation of the euro – encouraged a flight to safety in European-listed gold-backed ETFs.”

As a whole for Q2, North American experienced outflows of 30.7 tonnes, European inflows came in at 53.2 tonnes and Asian inflows were at 16.7 tonnes, up 13 percent year-on-year.

2. Jewelry demand was down

The WGC notes “[i]t may seem surprising that gold jewellery demand failed to perk up in response to the relatively sharp decline in the US gold price over the quarter. But currency weakness in many markets meant that local consumers did not benefit from similar gold price reductions; instead they were faced with steady – or even higher – prices.”

Jewelry demand failed to gain from a 5.4 percent fall in the price of gold over April-June because the currencies of key consumers including China, India and Turkey weakened, making dollar-priced gold more expensive for local buyers.

In India, consumption fell 8 percent in the second quarter to 147.9 tonnes, in part because of the weaker rupee. Demand in China was more successful, rising 5 percent to 144.9 tonnes.

3. Investment in gold bars and coins was flat

“Price dips often tease out an investor response, but, for many markets, the 5.5 percent fall in the US dollar gold price over the quarter failed to translate into buying opportunities because of local currency weakness. Investor concerns over currency depreciation were, however, a driver of demand in some markets, most notably China and Iran,” the WGC stated.

Keeping gold coins and bars from facing a decline in Q2 was China, which saw demand rise 11 percent to 69.5 percent due to gold benefiting from a “flight to safety” amidst increasingly tense trade war concerns.

“The yuan weakened drastically against the US dollar, falling 5 percent over the quarter. And the stock market slumped: the Shanghai Stock Composite index dropped 14 percent in the first six months of the year. The year-on-year rise was from a relatively soft quarter in Q2 2017,” states the WGC.

Despite China’s increase, other parts of the world faced declines year-on-year.

Iran and US demand ticked up year-on-year, coming in at 15.2 tonnes and 11.3 tonnes respectively.

The financial institutions added 89.4 tonnes to global gold reserves in Q2, but purchases were down from Q2 2017.

“Russia’s voracious appetite for gold is strategic – amidst geopolitical tensions it looks to diversify away from the US dollar,” states the WGC.

Additionally, Kazakhstan’s gold reserves grew by 11.6 tonnes during Q2 to 20.7 tonnes, which is a year-on-year increase of 3 percent and Turkey’s H1 net purchases totalled 38.1 tonnes after net purchases of 8.3 tonnes with gold reserves totalling 240.2 tonnes at the end of June.

5. Gold use in technology grew

Gold used in technology grew 2 percent to 83.3 tonnes in Q2.

“This uptick was again driven by strong electronics demand, particularly in the wireless and memory sectors, which defied the traditional summer lull,” the WGC notes.

The report revealed that the yellow metal was used in electronics grew 3 percent year-on-year to 66.2 tonnes in Q2.

The WGC states, “[t]his was driven by strong demand from power amplifiers used in 5G infrastructure and 3D sensors in VR gaming systems and automobiles. In fact, this very strong demand for 3D sensors is not currently being met by supply, boding well for the short to mid-term.”

Despite a 1.8 percent year-on-year decline in India, several other countries registered strong growth. The traditional technology hubs—Mainland China/HK and South Korea—once again topped the list with volumes of 18.4 tonnes and 6.7 tonnes respectively. The US also grew, reporting a 3.0 percent growth year-on-year to 14.7 tonnes.

Finally, on the other side of the market, increased mine production and recycling helped lift overall supply by 3 percent to 1,120.2 tonnes during Q2.