Fidelity Minerals Corp. is pleased to announce the acquisition of a portfolio of projects including Las Brujas, Cerro el Bronce, and Porphyritic Copper.

Fidelity Minerals Corp. (TSXV:FMN, FSE:S5GM, SSE:MNYC) (“Fidelity Minerals” or “the Company”) is pleased to announce the acquisition of a portfolio of projects including Las Brujas, Cerro el Bronce, and Porphyritic Copper (NR April 29, May 21 & June 11, 2019) have now been completed with the concessions (refer Table 1) transferred into the Company’s wholly owned Peruvian subsidiary, Minera Chao SAC.

The Las Brujas project is readily road accessible from Cajamarca, and features gold mineralization in rocks and elevated gold in soils over a 1.0 km by 1.3 km core area, with local rock chip sampling returning grades of up to 10.0 m @ 1.57 gpt Au and 9.8 gpt Ag. Gold mineralization occurs in silicified volcanic rocks and hydrothermal breccias, with the highest-grade gold mineralization found in a hydrothermal breccia body which contains some vuggy silica fragments; the zone is located within an extensive argillic, advanced argillic, and quartz-sericite alteration zone covering 3 x 6 km. The geochemical signature recognised by previous workers is reflective of an epithermal precious metal system. The Las Brujas property covers 1,900 Ha and is hosted in the volcanic rocks belonging to the Calipuy Formation, which also hosts the Yanacocha and Pierina gold deposits: Yanacocha is one of the largest and lowest cost gold mines in the world.

Las Brujas Exploration Targets: With the project acquisition now complete, the Company will immediately commence planning a well-focused geological mapping and geochemical sampling program. The Company is optimistic these results would justify more detailed magnetic and induced polarization (IP) geophysical surveys designed to assist with target definition before high-impact drill-testing. Although the project is 100% owned by the Company, in the event the Company makes a decision to mine at the Las Brujas project, the Company will establish a 75:25 unincorporated JV with the vendors, where the majority interest in the JV will be owned by Fidelity Minerals.

The Cerro El Bronce Gold Project is 100% owned by Fidelity Minerals, and is surrounded on three sides by active gold exploration projects operated by Newmont-Goldcorp. The project is centred upon an area of intersecting gold-mineralised vein systems that are hosted in granodiorites and tonalites of the Miocene Cordillera Blanca Batholith, which have been mined by artisanal miners in locations on and adjacent to the property. In addition to the mineralised veins, later intrusive porphyritic monzonites and diorites have been reported from the Mina Bronce and adjacent (to the east) Mina Verde occurrences. Mineralization has also been described as probably mesothermal chalcopyrite and pyrite dominated, with underground veins within 12m of an adit grading up to 6.8% Cu and 20.3gpt Au at Mina Cabana located to the WSW of Bronce. The property hosts evidence of hydrothermal brecciation in outcrop in the valley below the worked veins.

As part of the acquisition agreements for both the Cerro El Bronce and Las Brujas projects, in the event the Company sells the Concessions to an unrelated third party in the future, the vendors will be entitled to 10% of any cash profits generated from the sale, under certain circumstances. The determination of cash profits essentially consists of the sale proceeds minus total expenditures made by the Company on the project up to the time of the sale, including transaction costs and taxes and duties related to the sale transaction.

The Company owns 100% of the Porphyritic Copper Project, which is located proximal to both producing and development stage mines in the region including Lagunas Norte (90km NE), Magistral (95km ENE) and Penoles’ Racaycocha Sur (95km ESE). The Porphyritic Copper Project which comprises of two apparent porphyry hosted centres of mineralization and alteration that is reportedly related to a regional structure that obliquely crosscuts the prevailing Andean (mountain-building) structures. The recognised porphyry centres, as reported by the project vendors (refer Table 2), returned historical sampling results of 0.36% – 0.66% Cu at the Upper Zone and higher grades at the Lower Zone including >1% Cu.

At both Upper & Lower the mineralization is generalized as chalcopyrite-pyrite with accessory molybdenite, occasional galena (and copper oxide and carbonate minerals in weathered zones) seem to have attracted sampling attention, and locally minor artisanal interest, with advanced potassic alteration apparent with tourmaline, hematite, jarosite, and limonite; magnetite, in minute stringers and disseminated specks, are also an indicator of a mineralized porphyry-type system. Localized breccia type mineralization is also reported suggesting the possible local presence of intrusive breccias. 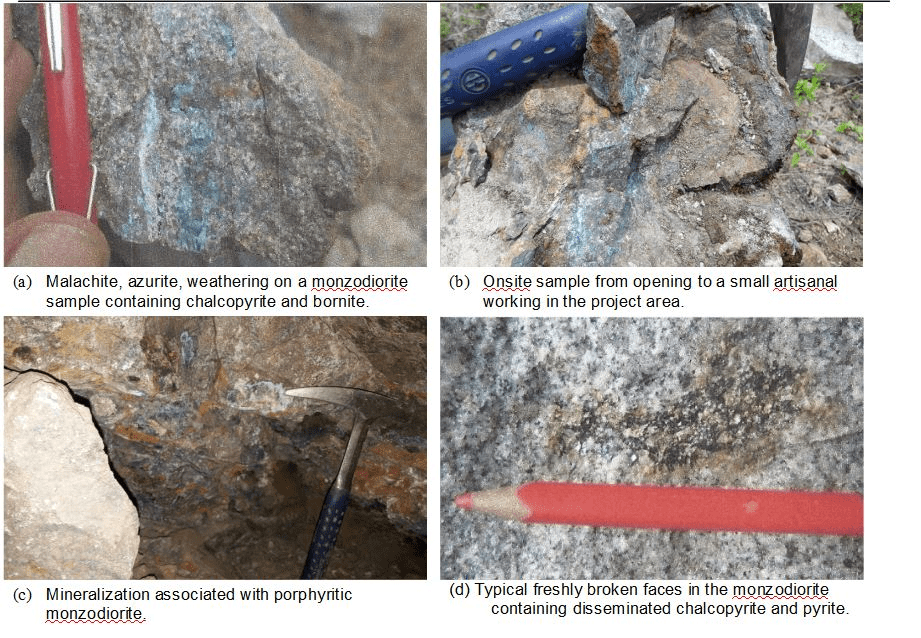 During the last 6 – 12 months, Fidelity Minerals has taken advantage of the downturn in precious metals prices, to systematically assemble a portfolio of 5 additional projects (refer Figure 2). As the gold price has firmed more recently, Fidelity Minerals has received unsolicited interest from a range of mining companies interested in forming partnerships to appraise the mineral prospectivity of these recently acquired projects. 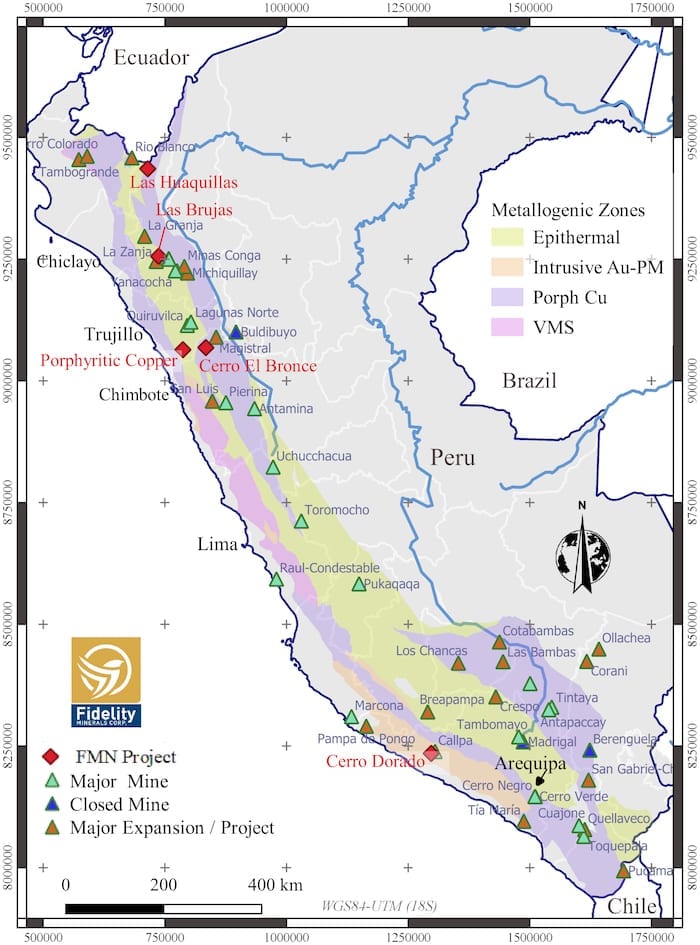 The Company has continued with important data acquisition in order to develop a more comprehensive understanding of the project and to update the existing geological model, beyond the historical resource estimate released previously.

The project consists of two portfolio packages, a 100% interest in the Greater Las Huaquillas (GLH, 3,800 ha) area surrounding the Core Las Huaquillas (CLH, 3,600 ha) area, where the Company has agreed to acquire and has completed payment of all consideration for a 44.5% interest. In order to advance the acquisition of this interest, the Company is supporting the Vendor with the ongoing legal perfection of the Company’s interest in the Core Las Huaquillas (“CLH”) concessions, including improvements to the management and operating records of the Peruvian company that holds 100% of CLH.

The Company continues to investigate near-term commissioning opportunities for the Cerro Dorado gold mill via potential participation of a number of third parties that are looking to capitalise on the improvement in the gold price. The Cerro Dorado mill offers the benefit of a beneficiation plant and tailings impoundment that has been fully permitted, a timesaving of at least 24 months in comparison with the establishment of a new site to process the abundance of gold ore being produced in the vicinity of Cerro Dorado. The Company is at the advanced stages of negotiations with a number of parties interested in pursuing the opportunity to re-commission Cerro Dorado in a range of structures, including the potential option, and/or outright sale of the project.

Director & CEO of Fidelity Minerals, Mr. Ian Graham commented: “The completion of three 100% owned gold and copper projects in northern Peru prepares the Company for near term exploration which is geared to the identification of high-interest drilling targets. In the context of Recent Regional Transaction Activity, the properties position Fidelity with multiple opportunities to advance strong prospects that are well endowed with promising significant discovery potential. The prospects are the product of our Strategic Project Generator model, whereby the Company identifies highly prospective gold opportunities in regions dominated by major mining company assets.”

Executive Chairman of Fidelity Minerals, Mr. Bahay Ozcakmak added: “The concurrent finalisation of the acquisition of these three highly prospective projects provides Fidelity Minerals with a range of strategic opportunities. As we seek to transition from a single project focus, to a portfolio of large-scale resource projects, we are excited about the resurgence of interest in precious metals. In addition to the Greater Las Huaquillas project where there is a significant historical resource endowment, these new gold projects, Las Brujas and Cerro El Bronce, position Fidelity Minerals strongly to take advantage of this increased appetite, as evidenced by recent M&A activity in the gold sector.”

Fidelity Minerals Corp. is assembling a portfolio of high-quality mining assets in Peru through the implementation of our Strategic Project Generator (SPG) model. The project generator model involves the identification and acquisition of appraisal stage opportunities with near-term valuation catalysts, including potential for high-impact M&A. The company is backed by an experienced management team with diverse technical, market, and commercial expertise and is supported by committed and sophisticated investors focused on building long term value.

On behalf of the Board of Fidelity Minerals;

Disclaimer & Forward-Looking Statements: This news release contains forward-looking statements. Forward-looking statements are statements that relate to future events or future financial performance. In some cases, you can identify forward-looking statements by the use of terminology such as “may”, “should”, “intend”, “expect”, “plan”, “anticipate”, “believe”, “estimate”, “project”, “predict”, “potential”, or “continue” or the negative of these terms or other comparable terminology. These statements speak only as of the date of this news release. This news release may also contain inferences to future oriented financial information (“FOFI”) within the meaning of applicable securities laws. The information in this news release has been prepared by our management to provide a context for the project acquisition and to provide the reader with an outlook for our future activities and anticipated key projects and may not be appropriate for other purposes. Forward-looking statements in this announcement include, (but are not limited to) advancing certain key project activities that could represent important milestones which the Company expects may represent material valuation catalysts, such as the expectation that through the Strategic Project Generator model Fidelity Minerals is positioning itself to be a beneficiary in this environment of increased appetite for prospective projects in this region. Further, forward-looking statements in this release include that the Company believes that recent project-level transactions in both Peru and neighbouring Ecuador provides evidence that high quality projects in the Northern Andean Copper Belt could deliver excellent potential transaction-based outcomes for the Company, and that through the Strategic Project Generator model the Company is positioning itself to be a beneficiary in this environment of increased appetite for prospective projects in this region. In addition, the observations that Fidelity Minerals has received unsolicited interest from a range of mining companies interested in forming partnerships to appraise the mineral prospectivity of the recently acquired projects described in this release (Las Brujas, Cerro El Bronce and Porphyritic Copper); and that the Company is at the advanced stages of negotiations with a number of parties interested in pursuing the opportunity to re-commission Cerro Dorado in a range of structures, including the potential option, and/or outright sale of the project; and that the Company is actively pursuing the perfection of its title over the Central Las Huaquillas Project or the implication that these initiatives will individually or collectively be successful comprise forward looking statements.