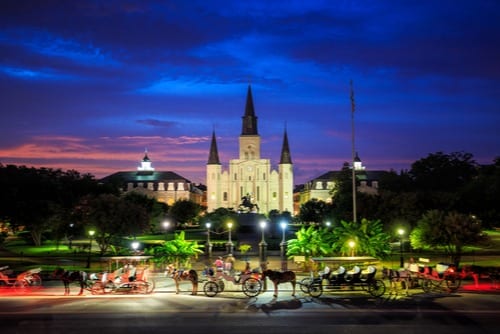 Did you miss the New Orleans Investment Conference this year? INN runs through some of the key themes in this overview, from Fed cuts to safe haven commodities.

The safe haven nature of gold and the other precious metals took center stage at the 45th installment of the New Orleans Investment Conference.

The annual crash course in investor education hosted by Brien Lundin took place November 1 to 4 on the edge of the New Orleans waterfront district.

Hedging against crippling national debts, geopolitical unrest and opaque markets was the rationale for focusing on precious metals offered up by the analysts and experts, urging investors to prepare for the worse, while simultaneously hoping for the best.

This year’s faculty of speakers touched on a number of topics related to the positive performance of the precious metals sector, some of which were brought up at the Precious Metals panel hosted by Thom Calandra of the Calandra Report on day one.

The discussion opened around the topic of gold demand and sales not being driven by consumers or investors in North America.

Despite the precious metals sector gaining traction in Q3, into Q4 Bosse noted that demand for the yellow metal is propelled by countries where its safe haven status is more about securing the future and less about saving for a rainy day.

“The poorer you think you will become, the more you want to hold gold,” Bosse told attendees.

This is especially true for India and China, which comprise the two largest gold purchasing demographics.

“If you’re in India or China and you are not one of the super wealthy and you want to pass on wealth or you want to preserve wealth, you know that paper currency isn’t the way to do it, so you’re looking at a physical asset and the easiest one of those is gold,” he said.

Concern over the devaluing of currencies and the large amounts of debt being generated across the globe is also propelling the momentum of gold and the other precious metals.

There was consensus among the panel that negative interest rates were positive for gold moving forward and would add to its allure as a safety net asset.

The three interest rate cuts implemented by the Federal Reserve this year was also a recurring topic at the event. CEO and chief strategist of Quill Intelligence and former Federal Reserve Bank of Dallas employee Danielle DiMartino Booth used her presentation entitled  “Still Fed Up” to highlight some of the issues lowering interest rates three times in a row has created.

The outspoken critic of the Federal Reserve blames the central banks for the “bastardization of price discovery” that has distorted the investment landscape.

“If the Federal Reserve holds interest rates too low for too long then investors are going to behave differently and they are going to invest and trade amongst one another differently knowing that they can take more risk on because if something is to go wrong the Fed’s got their back, and that completely distorts the whole price discovery and the whole idea of risk, reward and consequences you take on for speculating,” the author of “Fed Up” told INN during an interview.

DiMartino Booth noted that many of the indicators present ahead of the 2008 economic meltdown are being exhibited.

“Morgan Stanley (NYSE:MS) figures that 39 percent of what is formerly rated as investment grade corporate debt today should actually be rated junk and yet it’s not,” she explained. “It’s not a small figure, when you consider that US corporate indebtedness in the aggregate is US$15.5 trillion dollars, 24 percent of US GDP.”

Highlighting the contracting markets in the US and the precarious nature of the economies on across either border in Mexico and Canada, DiMartino Booth urged investors to be alert and vigilant.

While speakers like DiMartino Booth and Calandra advocated for caution, other speakers took more of an optimistic stance.

Brien Lundin, president and CEO of the New Orleans Investment Conference and editor of the Gold Newsletter, spoke of the general optimism related to gold and some of the concern investors faced in an increasingly opaque market.

Lundin sees value in juniors that haven’t benefited from the strong precious metals market in the same way the larger, more established miners have.

“Generally, most agreed with my basic assessment that a major, long-term bull market in gold and silver has been confirmed by both the fundamental and technical evidence,” he continued. “And the fact that we know the wind is behind us on the metals, yet the junior miners are still selling at historically low levels, represents an extraordinary investment opportunity.”

During his day two presentation, Nick Hodge, founder and president of the Outsider Club, spoke about why the juniors haven’t moved and what is hindering them.

Hodge started with a quote from fellow conference speaker Doug Casey. “All these juniors are burning matches, junior equities are burning matches; if you hold them for too long, they are going to burn your fingers,” he said. “And that is very true.”

Companies restructuring their focus or “changing the question,” as Hodge calls it, is one of the ways investors are lulled into a sense of false security, prompting them to hold on to companies they should sell, or to keep a company past its best before date.

While there is great potential in the junior space, with low share prices and potential for extraordinary growth, Hodge wants investors to remember something.

Unlike the well-known mining majors, juniors are faced with a hosts of risks, including the commodity cycle, funding, permitting, jurisdiction and capital structure.

“I think one thing that was obvious at New Orleans 2019 is that there are not only a lot of great opportunities in the junior mining market, there are also a lot of very smart investors taking advantage of them,” said Lundin.

Day three of the conference featured a lively panel entitled Booms, Busts and Bubbles, on which Mike Larson of Weiss Ratings, Peter Schiff of Euro Pacific Capital and Grant Williams of HMMM PTE spoke of the impending economic collapse and the indicators over the last year that have presented themselves.

“This is the tip of a very big iceberg,” said Schiff, who pointed out that in Q4 2018, the markets collapsed in the worst December on record since the 1930s.  Interest rates were 2.25 percent at the time before the Fed did an “about face in its monetary policy” and started cutting rates.

“So, when the markets started to buckle because the Fed moved interest rate up to 2.25 to 2.5 percent, that was really enough to break the camel’s back, so that was really the first sign of stress,” said Schiff.

The quantitative easing that is now being undertaken through interest rates cuts is the second sign, according to the chief economist and global strategist at Euro Pacific Capital.

The Fed that is pushing this market to new highs by cutting interest rates, by indicating to the markets that they don’t have to worry about rate hikes no matter what happens with inflation. The Fed’s not going to raise interest rates. https://t.co/LeEqX924Pe pic.twitter.com/DLqvB4P1Ig

“The Fed has totally reversed course on both and it’s failed to normalize interest rates; it’s failed to strengthen its balance sheet. It’s now on a course back to zero percent interest rates,” he added. “For me it’s already clear the air is coming out of the bubble. It remains to be seen whether or not the Fed and other central banks will be able to stop it from deflating; I don’t think they can.”

Even though the analysts and experts were split about how imminent a financial crisis  or meltdown may be, they did all agree that it was an opportune time to buy gold. Whether that be gold mining shares or physical bullion, the consensus was buy as much as you can comfortably afford.

“Gold’s current bull run began with the Fed’s stunning shift from tightening monetary policy to loosening it, an absolute U-turn accomplished over the span of only a few short months. After the initial surge, the gold price was battered around by the trade dispute and Brexit headlines, among others, for better and for worse,” Lundin noted.

He continued, “I think it’s a prime example of how geopolitical events have no lasting effect on the gold market, and how only major monetary trends can drive the market over long periods. So, while political uncertainty and eruptions may move gold over short periods, and will likely continue to affect it over the coming months, gold bulls will have to hope for more Fed rate cuts and a continuance of the trend toward easier money.”

Listen to our New Orleans Investment Conference interviews from some of the panelists listed above and sector experts Rick Rule, Adrian Day and Byron King here.