Desert Gold Ventures Inc. is pleased to announce results from a drill program carried out on the Farabantorou Concession portion of its SMSZ Project.

Desert Gold Ventures Inc. (TSXV:DAU, FSE:QXR2, OTC:DAUGF) (“Desert Gold” or “the Company”) is pleased to announce results from a recently completed drill program carried out on the Farabantorou Concession portion of its SMSZ Project. The SMSZ Project is named after the Senegal Mali Shear Zone (“SMSZ”), which is related to 5 large gold mines located both to the north and south, along strike, including B2 Gold’s Fekola Mine, Barrick’s Gounkoto and Loulo Mines and AngloGold Ashanti/Iamgold’s Sadiola and Yatela Mines. The Barani East Zone control structure intersects the Senegal Mali Shear Zone, a feature in common with most of the large mines in the region.

During the period from June 25 to July 31, 2019, 45 holes comprising 4,676.2 metres of drilling were completed consisting of 11 air core holes, 27 RC holes and 7 combined RC/core holes. In addition, 4,857 metres of auger drilling in 645 holes were completed over select areas. Drilling was successful in extending the Barani East Zone to depth and along strike and returning significant drill intercepts from two, previously untested, recently sampled and mapped artisanal mining areas; Frikidi and Linguekoto (see Figure 1). Auger drilling highlighted a number of gold-enriched areas, that require drill testing. A summary of significant results by zone follows with details presented at the end of the release (see Table 1).

* True widths are estimated at 80-90% of drilled width

In addition to encouraging drill results, drilling has intersected gold-mineralized felsic and mafic intrusions, which suggest that the Barani East and Linguekoto Zones likely have additional potential at depth and along strike and are suggestive of more robust mineralization systems.

Jared Scharf, Desert Gold’s President & CEO commented, “the recent drill program has materially added to our Barani East Deposit and highlighted three new areas where additional drill testing and target development is warranted. Soon we will embark on our largest exploration program to date on our, recently expanded, 407 km2 land package, that now spans a 38 km segment of the prolific Senegal Mali Shear Zone. Work on these areas, and others, will continue in Q4, 2019 and well into 2020. We will provide detailed guidance regarding the up-coming exploration program in a subsequent release.” Mr. Scharf, also added, “to my knowledge, our Senegal Mali Shear Zone project now encompasses the largest, contiguous, non-major mining company holdings along the Senegal Mali Shear Zone. This is a significant accomplishment.” 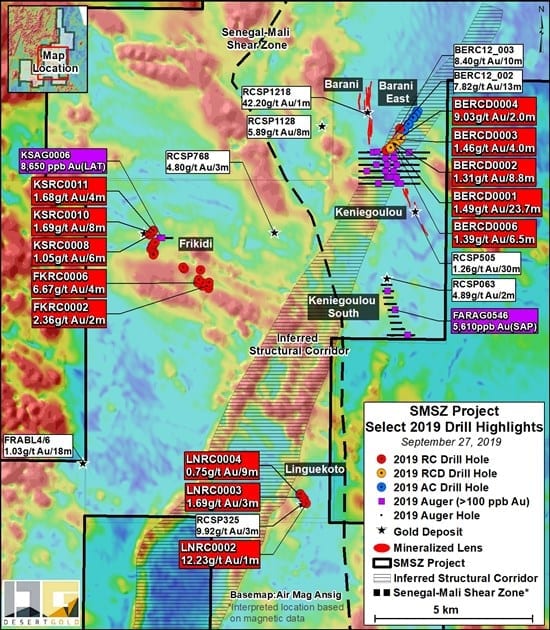 During the early summer drill program, 20 holes were drilled on and near the Barani East Zone, which is centred approximately 1,900 metres east of the interpreted location of the Senegal Mali Shear Zone.

Nine holes were completed to specifically target down-plunge, down-dip and along-strike extensions of the mineralization. This drilling was successful in extending the Barani East Zone down-plunge a further 90 metres, at least another 50 metres to depth on six sections and a further 250 metres along strike (see Figures 2 and 3), with all holes drilled outside of the current resource pit (Indicated Mineral Resource of 45,250 ozs gold grading 1.99 g/t gold and Inferred mineral resources of 73,170 ozs gold grading 2.15 g/t gold – NI 43-101 compliant resource report filed on SEDAR, 2014). This work suggests that the Barani East Zone is shallower plunging than previously believed and as such, additional holes are proposed (see Figure 2) to further test the inferred higher-grade portion of the zone at shallower depths, especially down plunge of a 2018 hole that returned 6.3 g/t gold over 13 metres. To date, the central, 450-metre long portion of the zone has been tested to 150 to 200 metres depth with the remaining holes generally testing to less than 100 metres depth. Recent highlight drill intercepts include 1.49 g/t gold over 23.7 metres including 2.87 g/t gold over 4.8 metres and 4.49 g/t gold over 2.85 metres. Gold mineralization is related to a northeast-trending, cross-cutting structure with altered limestone, siltstone, granite and mafic intrusions hosting the gold.

Eleven air core holes were drilled to test the northeast strike extension of a parallel zone of gold mineralization returning a best intercept of 0.47 g/t Au over 5 metres. As well, one of the combination RC/diamond drill holes intersected this horizon and returned 9.02 g/t Au over 2 metres. Previous holes along this trend have intersected up to 2.22 g/t gold over 17 metres. Additional holes are planned along this trend.

As part of the testing at Barani East, auger drilling of 473 holes totaling 4,013 metres, were carried out over a laterite plain where it was inferred that the Barani East, Barani and Keniegoulou gold mineralization trends would intersect (see Figure 2). This program was successful in delineating interpreted strike extensions of all three zones and identifying additional, gold enriched targets up to 150 metres wide (see Figure 3). Gold-in-auger values returned a high of 1,840 ppb gold with 22 sites returning in excess of 100 ppb gold. For reference, one of the auger anomalies, which returned 1,010 ppb gold, is associated with a drill intercept that returned 1.97 g/t gold over 7 metres. Most, if not all of the >100 ppb auger anomalies will be tested in the next drill program with a preference for those demonstrating interpreted strike extent. 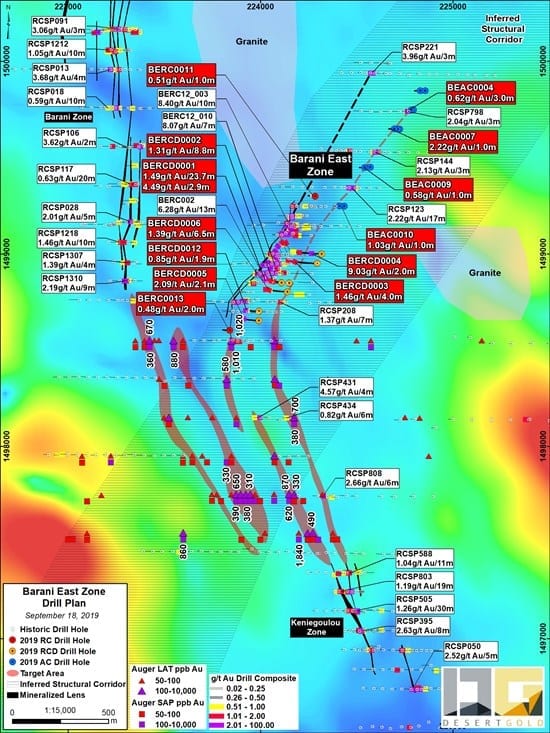 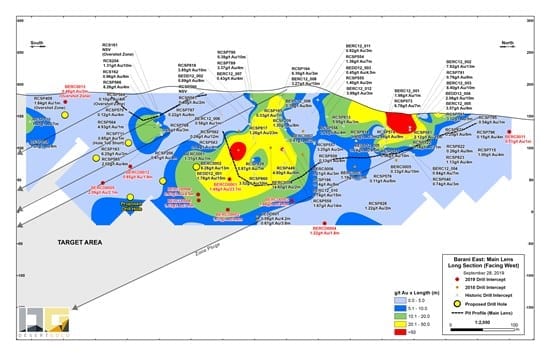 As a first pass drill program, a total of 21 RC holes were drilled to test an open-ended, recently-defined, 2,400-metre long by 700-metre wide area that hosts numerous northeast- and northwest-trending, perhaps stock-work like, sandstone-hosted, gold-bearing structures where grab sampling returned 92 samples >1 g/t Au including 5 samples containing >100 g/t Au (see Figure 4). Ten of the holes were drilled to test below specific artisanal workings were grab sampling returned high gold values. An additional eleven holes were drilled, as a fence across, what appears to be, only part of the area hosting gold mineralization. All holes intersected from 2 to 13 individual pyrite and quartz mineralized structures. Significant results include 6.67 g/t gold over 4 metres, 7.41 g/t gold over 1 metre, 7.50 g/t gold over 1 metre, 0.99 g/t gold over 5 metres, 2.75 g/t gold over 2 metres, 1.69 g/t gold over 8 metres and 1.04 g/t gold over 6 metres (see Figure 4). All of the mineralized lenses are open along strike and to depth. An induced polarization IP survey is being considered to trace the gold-bearing pyrite mineralization along strike and across strike and to search for areas with wider mineralized zones. Soil anomalies to 442 ppb gold, suggest the presence of additional gold mineralized structures in untested, laterite-covered areas to the southwest and northwest of the area.

In addition to the RC holes, 19 auger holes were drilled to test below a large laterite plateau, located in the north central part of the area. The auger holes returned 4 contiguous sites with >100 ppb gold with one site returning 8,650 ppb gold, the best auger result of this campaign. These sites will be tested during the next drill program. 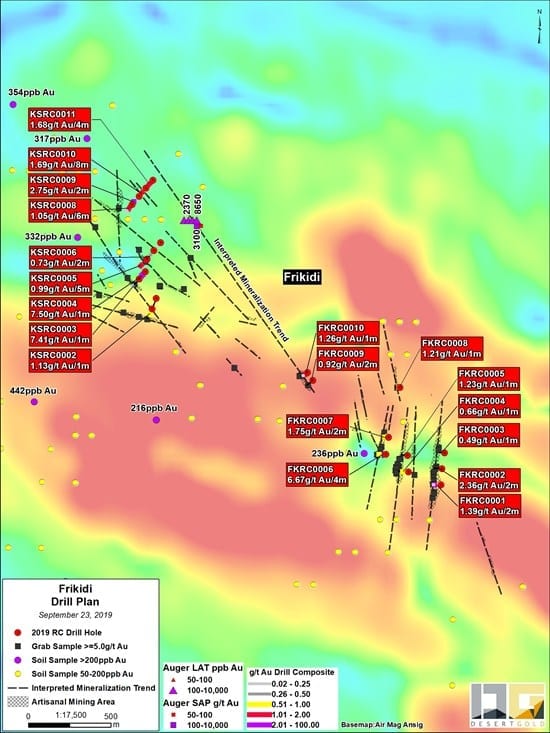 Four holes were drilled to test a northwest-trending artisanal area that is located immediately east of the northeast-trending structural corridor that hosts the Barani East Zone and several untested artisanal mining zones (see Figure 5). Previous drilling, on a parallel structure, returned intercepts to 9.92 g/t gold over 3 metres. Grab sampling in this area returned assays to 49.5 g/t gold. Of particular interest, is an altered, locally pyritic felsic intrusion, located at the north end of the trend, where the artisanal workings widen. This area, returned the widest interval of mineralization with an intercept of 0.75 g/t gold over nine metres in hole LNRC0004. As well, logging reports 20, pyrite +- quartz mineralized intervals in this 132-metre long hole. Other intercepts of note include 12.23 g/t gold over 1 metre and 1.69 g/t gold over 3 metres in holes LNRC0002 and 0003, respectively.

Soil sampling in the area, suggests that these northwest-trending mineralized structures could extend to the southeast, where soil sampling has returned values to 1,755 and 413 ppb gold (see Figure 5). 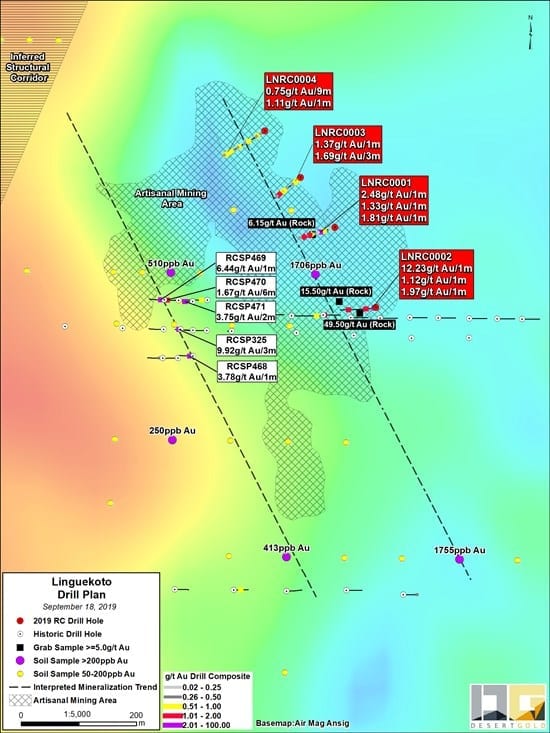 Auger drilling of 140 holes were carried out over the Barani South area as part of a target generation exercise. This survey was completed over the southern portion of a 4 km long gold-in-soil anomaly. Drilling across the north end, on three lines, 500 and 700 metres apart, returned drill intercepts of 4.88 g/t gold over 2 metres and 1.95 g/t gold over 4 metres. Auger survey results returned three sites with >100 ppb gold with a best value of 5,610, the 2nd highest value of the program. In retrospect, an auger survey was not the best tool for this area as the laterite cover was thin to non-existent and conventional soil samples were deemed to be effective.

Follow-up work will include air core drill fences across the best soil and auger anomalies, as well as additional auger drilling to the west of this trend, where there is a thick laterite cover. 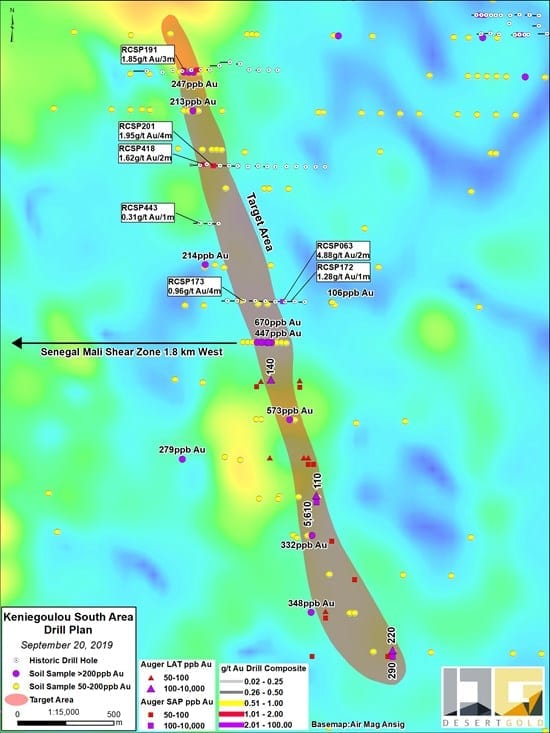 Desert Gold Ventures Inc. is a gold exploration and development company that holds 3 gold exploration projects in Western Mali (SMSZ, Segala West and Djimbala) and its Rutare gold project in central Rwanda. Our current focus is on the 407 km2 SMSZ Project that spans approximately 38 km of the prolific Senegal Mali Shear Zone.

For further information please visit our website www.desertgold.ca or information available on www.SEDAR.com under the company’s profile. 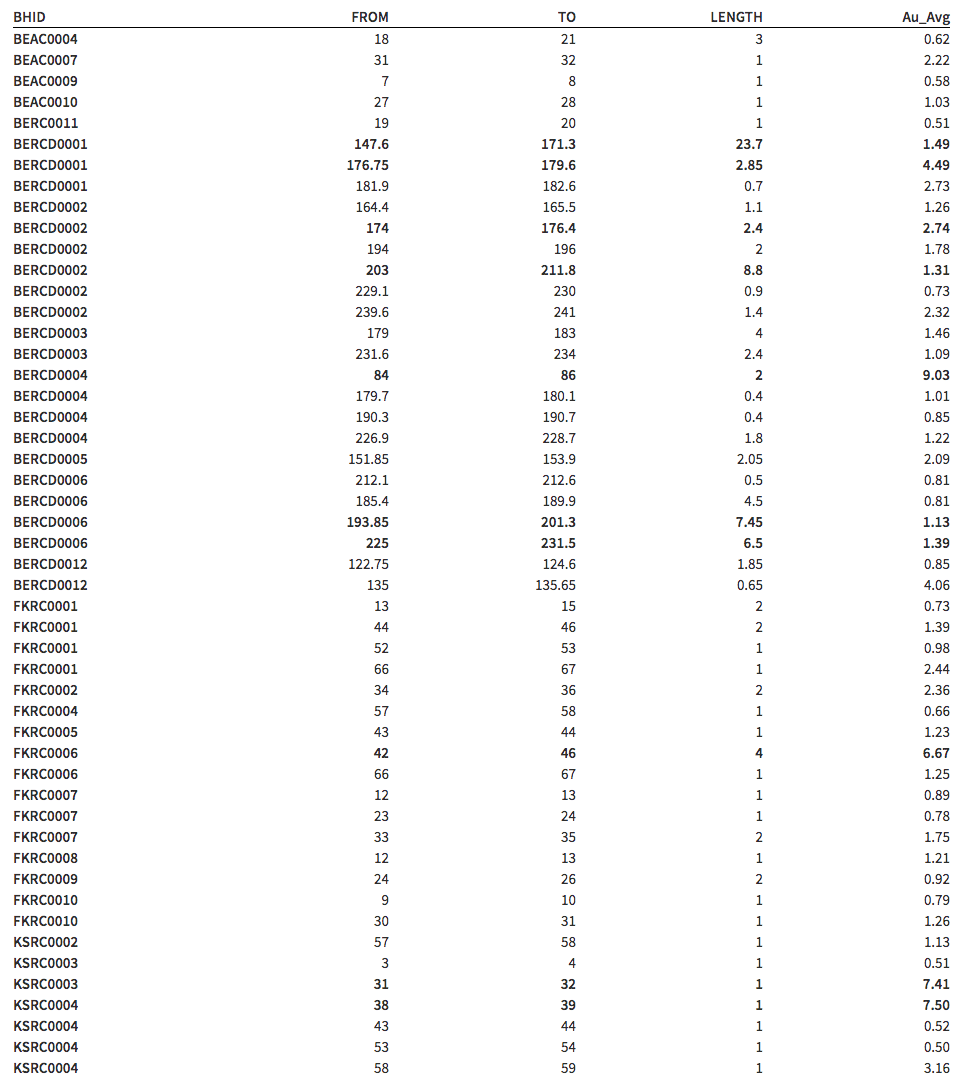 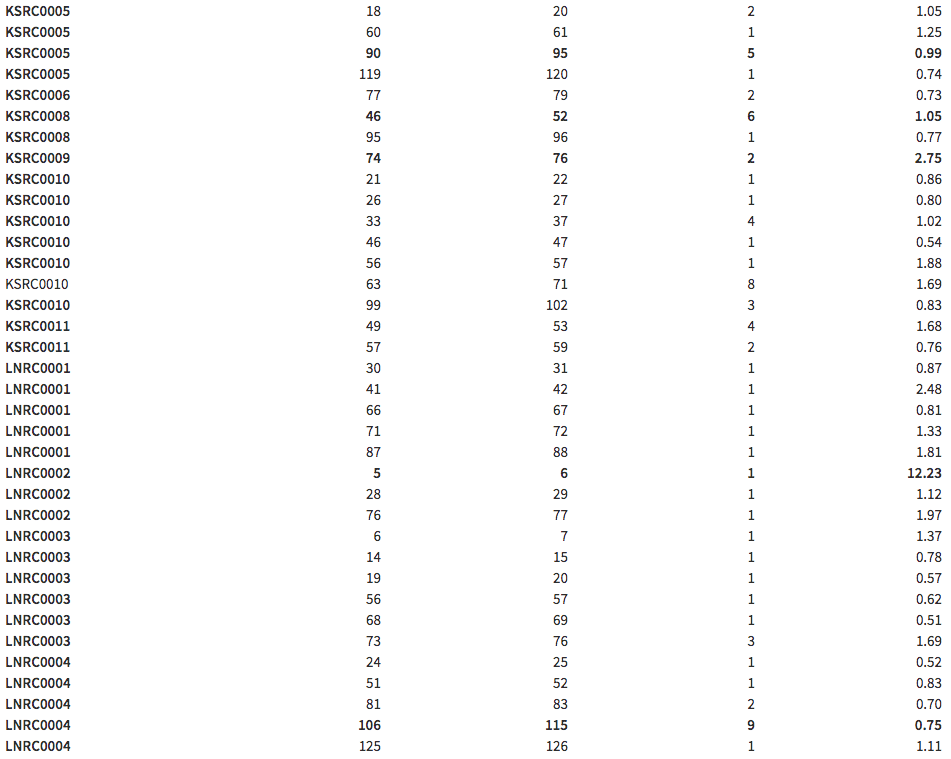