The recent volatility in the precious metals markets has the gold bulls and bears jostling to make their case for the price of gold going forward. 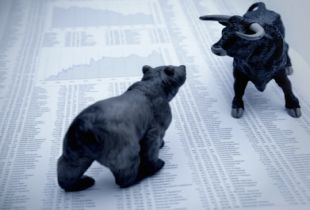 The recent volatility in the precious metals markets has the gold bulls and bears jostling to make their case for the price of gold going forward.

The ten-year run up of gold has largely been attributed to uncertainty with central bank monetary policy in the United States and Europe leading to inflation and debt concerns. There has also been a lot of momentum-based investment by speculative investors and hedge funds injecting large investment flows into the market. George Soros’ hedge fund had previously held large positions in gold, but has recently pulled back on a majority of their holdings in gold and silver.

Yet other hedge fund managers are far more bullish. John Paulson bullishly forecast that gold could reach $4000 per ounce in the next few years. Today in NY, gold lost $20.60, down to $1516.50 per ounce.

The pullbacks in precious metals this week are highlighting the competing views on the gold market. The question on many investors’ minds is, “whose strategy is right?”

George Soros’ hedge fund reported that they sold some of their holdings because of a reduced risk of deflation. Most analysts expect that June will mark the end of QE2, and that the Fed will not continue easing measures with a third round of bond purchases.

Keith Anderson, Chief Investment Officer of Soros Fund Management, has argued that “by the end of this year the Fed will signal that interest-rate increases are in the offing, possibly early in 2012, according to someone close to the firm,” reported Gregory Zuckerman, for The Wall Street Journal. Other fund managers, such as Alan Fournier of Pennant Capital, share the same sentiment and have sold holdings in gold.

The gold bulls are insisting that due to a weak economic recovery, the lack of meaningful interest rate hikes by central banks in the United States and Europe will continue to increase the risk of inflation and debt. These factors benefit gold going forward if they persist.

John Paulson, founder of the hedge fund Paulson & Co, is diametrically opposed to the views of the Soros Fund. He still sees inflation as the largest threat, and therefore has forecasted the price of gold to more than double in the coming years.

“Mr. Paulson told investors Tuesday morning that gold prices could go as high as $4,000 an ounce over the next three to five years, as the U.S. and U.K. flood the money supply,” said Zuckerman.

Mr. Paulson’s $4000 dollar gold prediction is certainly one of the most bullish forecasts for gold right now. However, other managers are on his side of the fight as well. Andrew Hall, hedge fund manager for Astenbeck Capital, has stated that precious metals prices will continue to increase unless evidence suggests that there is an “imminent rise” in interest rates.

The dollar has sunk to its lowest point in three years, and more countries around the world are starting to bulk up their gold reserves. Mexico, Russia and Thailand have added about “$6 billion to their [gold] reserves in February and March as prices advanced to a record, the dollar weakened and Treasuries lost investors’ money,” reported Nicholas Larkin, for Bloomberg. These purchases signal that some countries are losing faith in the US dollar as the global reserve currency. However, purchases such as these are also viewed differently by competing schools of thought. Some point to large purchases of gold by various countries just before the gold crash in the early 1980s.

Even the basic philosophy of gold as a wise investment is challenged by many. Warren Buffett has stated that he’d rather bet on strong businesses instead of something “that doesn’t do anything . . . the only thing you can do with gold is admire and fondle it.”

Robert Brusca of Fact & Opinion Economics shared an even more frank and cynical view. “Gold is the investment for people who have lost hope in everything else and are not thinking about what they are investing in.”

These are examples of what some gold bugs would call inflammatory statements or dismiss as an absurdity. However, in Warren Buffett’s case, it is the advice of one of the world’s most successful investors.

Bob Farrell, Chief Market Analyst for Merrill Lynch from 1962-1992, authored the famous, ‘10 Market Rules to Remember.” Some of the rules are something to consider in times of volatility.

1) Markets tend to return to the mean over time.

2) Excesses in one direction will lead to an opposite excess in the other direction.

5) The public buys the most at the top and the least at the bottom.

6) Fear and greed are stronger than long-term resolve.

9) When all the experts and forecasts agree – something else is going to happen.

It is the rational investor that is willing to look into the competing schools of thought, and to listen with an open mind to their arguments in order to arrive at a rational decision. All of the investors quoted above have made tremendous amounts of money in their time through different approaches. The answer the question, “whose strategy is right?” is up to you.

Ways to Invest in Potash
UxC’s Philip Johnson: America’s Nuclear Energy Landscape Pre-Election
What Happens to Cannabis if Biden Wins?
What’s at Stake for Mining in the US Election?