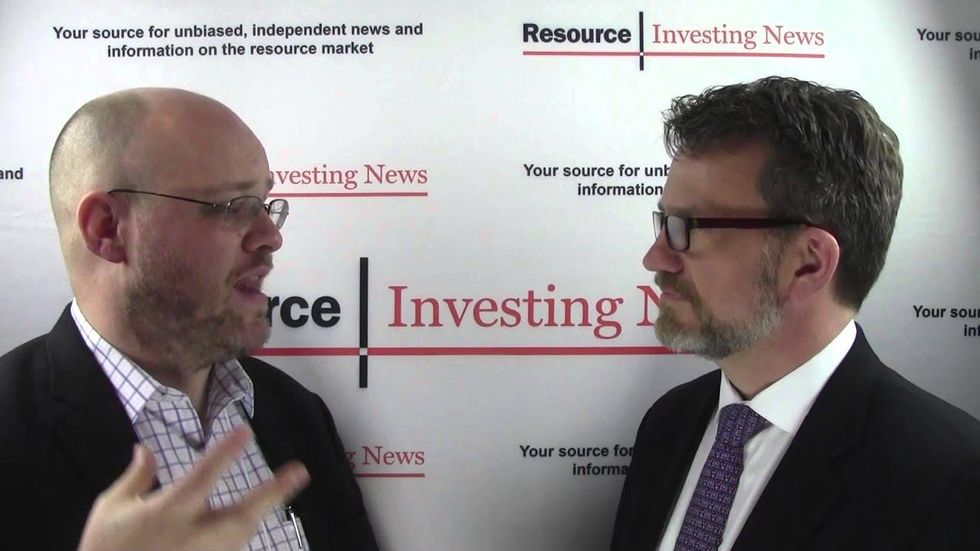 Cox is a gold bear who “despise[s] the metal,” but lately he’s found himself tempted by gold companies. “I’m actually really finding it fascinating how much the strong US dollar has fundamentally lowered local costs for these companies,” Cox explained. “Companies I would not have thought would have been profitable at $1,200 an ounce are making a substantial amount of money.”

At Red Cloud Mining’s pre-PDAC event last week, Resource Investing News had the chance to speak with Benjamin Cox, managing director of Oreninc, a boutique merchant bank that provides research for companies, institutions and investors in the junior commodities space.

To start off, he discussed why he believes gold companies are underpriced. “I’m actually really finding it fascinating how much the strong US dollar has fundamentally lowered local costs for these companies,” Cox explained. “Companies I would not have thought would have been profitable at $1,200 an ounce are making a substantial amount of money.” Though he believes that’s “probably a short-term effect,” he sees it as “quite a useful bump for these people.”

All in all, he’s finding himself tempted by gold companies despite being a self-described gold bear.

In closing, Cox gave his opinion on equity crowdfunding in the mining space. Though he thinks it may have a place in the arena, he has a couple of concerns about the idea. Watch the video below for more of what he had to say.

RIN: Hi. This is Mike Rodger with Resource Investing News. I’m here with Benjamin Cox of Oreninc. We’re here at the pre-PDAC showcase put on by Red Cloud mining. Benjamin, thanks very much for joining me.

BC: Thanks for having me. It’s always a pleasure talking to you.

RIN: So, tell us why you think gold companies are underpriced.

BC: Well, I’m actually really finding it fascinating how much the strong US dollar has fundamentally lowered local costs for these companies. So companies that I would have not thought would be profitable at $1,200 an ounce, are making a substantial amount of money. And that’s completely unexpected because their costs are all denominated in local currency.

Now this is probably a short-term effect, over a quarter, 2 quarters, 3 quarters, 4 quarters as the currency, as local prices, stay separated from global prices. But in the longer term I’m not sure it’ll last, but in the short-term I think this is quite a useful bump for these people. People are making money. I mean, in Canadian dollar terms gold is a reasonably high price.

RIN: Similar to what it was not long ago when things those companies were doing much better?

BC: Yeah. And that’s always an important thing to keep track of. There’s so many things that impact small producing mines. Currency, fuel cost, and a lot of those things are really going in their favor this year and that’s just a really nice thing to see. While commodity prices are down – I’m not a gold bull as you know, I’m more of a gold bear – I’m actually a financially believer in gold. These people are actually making money, and they’re making decent amounts of money on mines that I just would not have thought would’ve been profitable at these prices.

RIN: So do you think this will occur on other jurisdictions as well? Say in Africa or South America.

So you go to the Congo, you hire a mining engineer from the UK or from the US, you’re not going to be paying them whatever the Congo’s currency is. They’re going to demand US dollars. So it takes a place that’s got a strong local supply center that is denominated in local currency for the cost to truly bleed through in this way.

RIN: Good. So one of the things that has come up at this Red Cloud event is crowd-funding – equity crowd funding even. Do you think this has a place in the future of mining finance or exploration finance?

BC: Anything is better than nothing, is my first point so it could be – we have a wonderful place. I’ve got two things that scare me about equity finance in the mining space. The first one is, what’s the average age of an investor in a mining deal today?

BC: What’s the average age of a person who does crowdfunding?

RIN: I don’t know but I imagine there are some people in that age group, not probably the majority.

RIN: And that’s always, well historically anyway, been tough for companies that are looking for mining things.

BC: I don’t know if it’s been tough. At some point there’ll be greed. And when greed comes back, when you start to see gold companies trading for three times earnings, I even get tempted. Let’s face it, I’m a gold bear. I despise the metal, I grew up with a father who’s a gold bull. Just the fact that I’m tempted by gold companies means that sometimes the greed will start coming back. And when greed starts coming back, funds will flow in.

But the question is when funds flow in, will people take the time to do all the hard work involved in building out a crowd-funding infrastructure in a bull market, or will they just revert to their old ways of raising money the way they always did.

RIN: If the market is turned then those other dollars are generally there, and it might be easier.

BC: And then people get lazy.

BC: The fact is, we have an industry that’s extremely lazy in how they raise money. As we both know.

RIN: Good. Well thank you very much again this has been great.

RIN: This is Mike Roger with Resource Investing News. Here with Benjamin Cox of Oreninc at the Red Cloud mining pre-PDAC showcase.

Do You Need Gold for Retirement?

VIDEO — Jeffrey Christian: Fed Can Hike a Lot Further, How Gold and Silver Will Perform