Advance Gold Corp. is pleased to announce drilling has started to test the large chargeability anomaly on its Tabasquena project in Zacatecas, Mexico.

Advance Gold Corp. (TSXV:AAX) (“Advance Gold” or “the Company”) is pleased to announce drilling has started to test the large chargeability anomaly identified in recent 3D Induced Polarization (IP) geophysical surveys on its Tabasquena project in Zacatecas, Mexico. Two phases of IP surveys identified a 1000 metres by 500 metres continuous chargeability anomaly. The anomaly remains open to the north and to the south and at depth.

Allan Barry Laboucan, President and CEO of Advance Gold Corp. commented: “We are very excited to drill this large chargeability anomaly as these kinds of targets are not easily found, especially in regions well known for big mines. What makes it particularly stand out is that the high chargeability is consistent from east to west on each survey line, and from line to line over the entire grid. One always has to be aware of possible false positives, such as the possibility of disseminated magnetite causing the chargeability anomaly. However, in this case there has been no magnetite found in the area and an historical magnetic geophysical survey by the Geological Survey of Mexico showed no magnetic anomaly. There are a few potential explanations for the anomaly of this size from mines in Zacatecas. At the Real de Angeles mine and the mine at Fresnillo there were large stockwork vein systems. Previous drilling at Tabasquena has found a near surface network of epithermal veins with widespread gold and silver mineralization, although the IP survey did not pick up that network of drilled veins. Another possibility is a porphyry intrusion that are known to be below epithermal vein systems. Finally, volcanogenic massive sulphide deposits (VMS) are known to occur in clusters, so far, there is only one found in the area, Teck’s San Nicolas VMS deposit. The San Nicolas discovery was found with the first drill hole into a large IP chargeability anomaly. For a small company like Advance Gold to have such a significant anomaly, in a prolific region for mines is exceptional, now we are drilling to better understand what we have at the Tabasquena project.”

The first drill hole to test the chargeability anomaly will be approximately in the middle of the anomaly. It will be drilled at a 65 degree angle, from west to east. The first image below shows the collar location and direction of the hole. In the north part of the image, you can see the Tabasquena shaft area, where historical mining was done in the oxide zone of the Tabasquena vein, and just off the image to the south is the Tesorito shaft also used historically to mine the Tabasquena vein in the oxides. 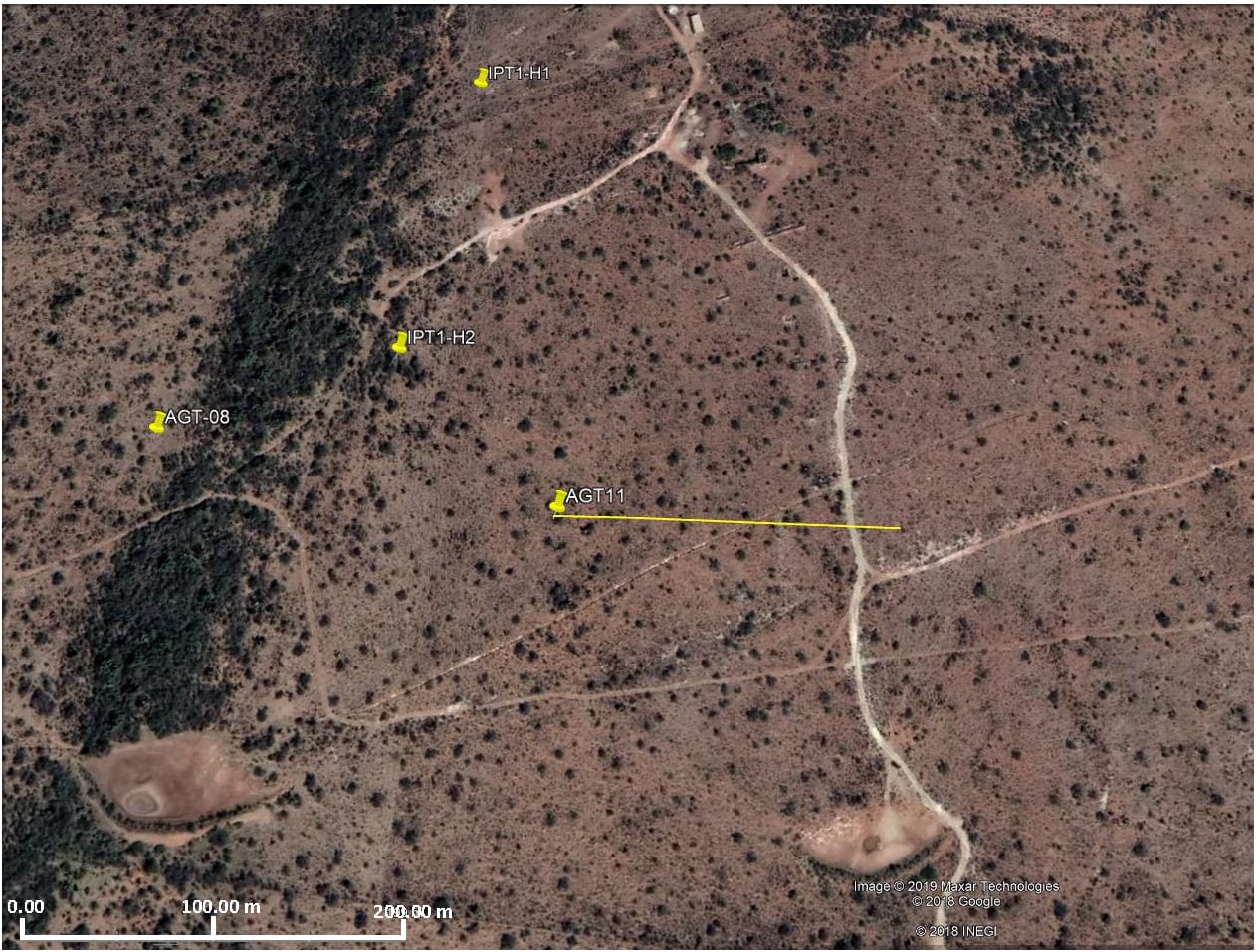 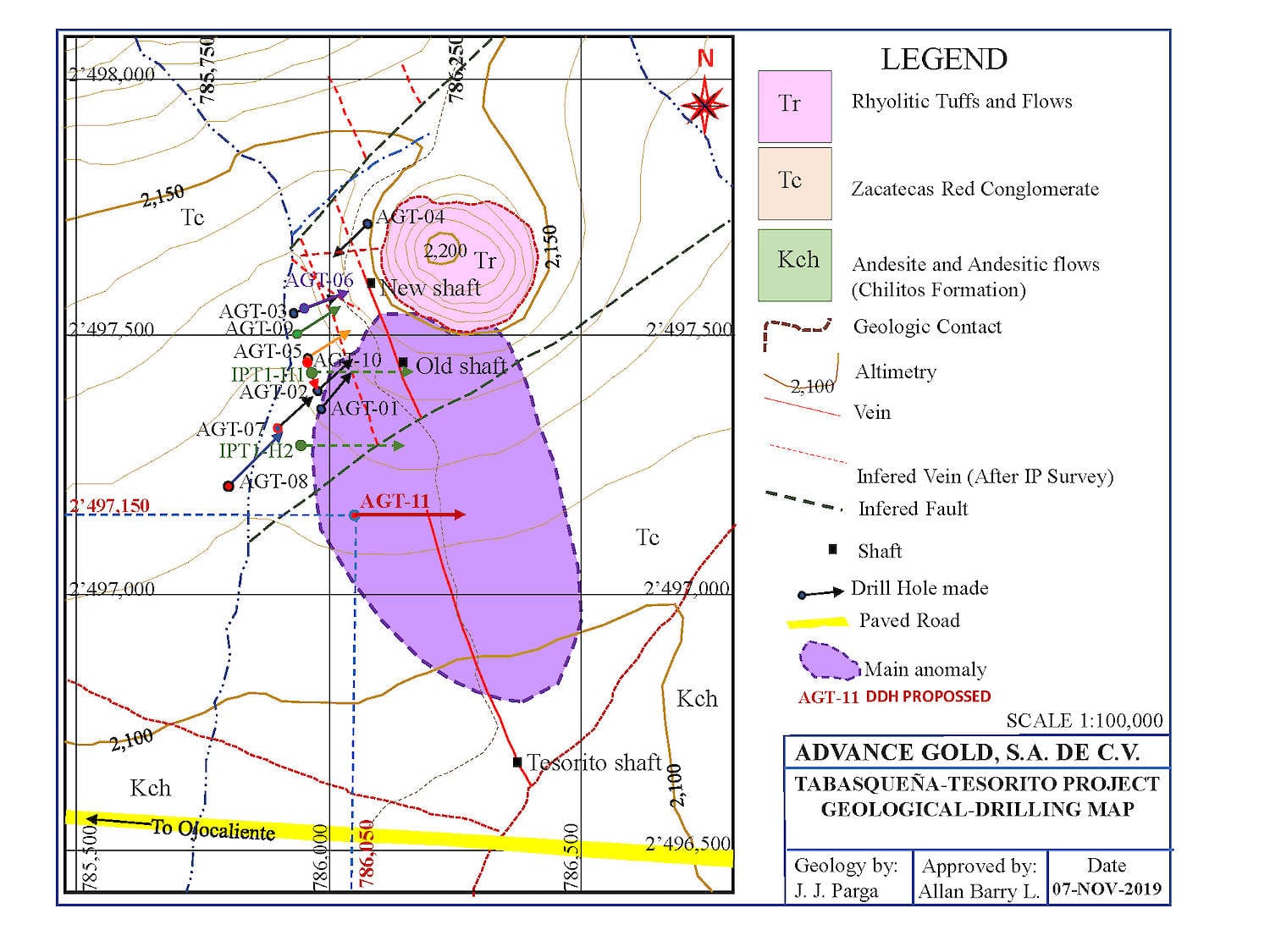 The final image below, is a cross section of the new drill hole, which has been designed to cover approximately 100 metres from west to east, plus go down to 500 metres and hit the middle of the chargeability anomaly. The anomaly remains open at depth beyond the planned 500 metres and a decision will be made during drilling to extend it. 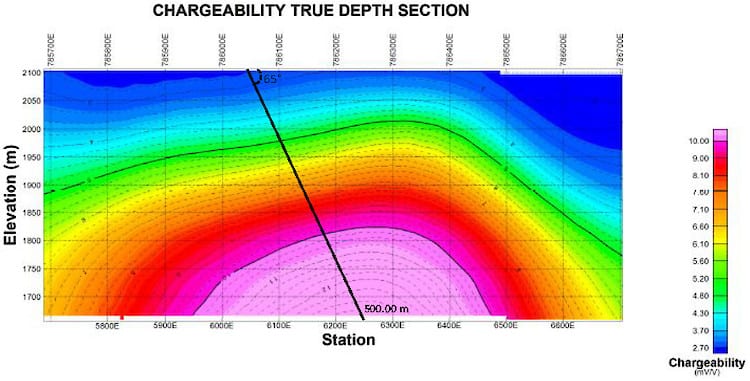 Julio Pinto Linares is a QP, Doctor in Geological Sciences with specialty in Economic Geology and Qualified Professional No. 01365 by MMSA., and QP for Advance Gold and is the qualified person as defined by National Instrument 43-101 and he has read and approved the accuracy of technical information contained in this news release.

Advance Gold is a TSX-V listed junior exploration company focused on acquiring and exploring mineral properties containing precious metals. The Company acquired a 100% interest in the Tabasquena Silver Mine in Zacatecas, Mexico in 2017, and the Venaditas project, also in Zacatecas state, in April, 2018.

Venaditas is well located adjacent to Teck’s San Nicolas mine, a VMS deposit, and it is approximately 11km to the east of the Tabasquena project, along a paved road.

In addition, Advance Gold holds a 13.23% interest on strategic claims in the Liranda Corridor in Kenya, East Africa. The remaining 86.77% of the Kakamega project is held by Barrick Gold Corporation.