Gold performed well in 2011 and the 2012 gold outlook by most accounts is also positive. But still, investors should prepare for a bumpy ride. 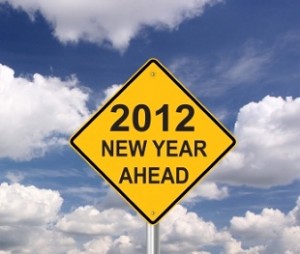 All things considered, gold was a strong performer in 2011. Investing in the metal was undeniably a volatile ride that included some steep declines. Still, when compared to global indexes, gold proved it still has star power. The majority of professional market watchers appear to believe that 2012 will be another good year for gold. But, investors should realize that a good year is not synonymous with smooth sailing.

While there is a substantial amount of optimism about gold’s performance in 2012, there are also an abundant number of warnings that price declines—drastic ones by some accounts— are also likely, especially in the beginning of the year.

A Deutsche Bank report notes that since the onset of the financial crisis over four years ago commodity markets have to contend with increasingly frequent longer lasting episodes of heightened asset market volatility, and that risk aversion is likely to continue through 2012.

Last year undoubtedly taught a lot of investors a lesson about risk and volatility. Many had turned to gold because of its reputation as a safe haven and the fanfare surrounding that status. Those who were in the game for safety and wealth preservation were prepared to sit back for a breather and watch prices climb. Then, to their surprise, gold revealed it also has a risk personality.

Other investors prioritizing margins, such as fund managers, contributed to the shock when they liquidated positions to obtain cash and limit losses. Those sell-offs helped shake investor confidence and perpetuate concerns of a gold bubble. That shaken investor confidence may continue to weigh on the metal for sometime.

At the ETF Securities Precious Metals Conference, Nick Brooks, Head of Research and Investment Strategy, sounded a reminder that gold is not a replacement for defensive portions of one’s portfolio. Though gold recovers quickly, he said, it does not hold up during a sell-off.

Headlines were also responsible for a lot of the volatility seen last year and there are those who expect to see this continue and that could batter prices at times, prompting safety seekers to look for alternative havens.

However, VTB Capital analyst Andrey Kryuchenkov, urged realism among investors this year. “There is little alternative to gold in times of economic uncertainty, despite the recent rush to the dollar,” he said.

In spite of the caution against bullish strategies that was issued by Deutsche Bank, its report goes on to say that the institution’s strongest conviction trade is long precious metals, specifically gold.

Much of the optimism about gold’s performance this year is supported by persisting fundamentals that have proved positive for the metal in the past.

Uncertainty, for example, is definitely a reality as we dig into this new year, from the fate of the Eurozone to the unknown magnitude of the slowdown in China.

Ross Norman of Sharps Pixley wrote that with regards to forecasting there is a valid argument that we may to some extent be wasting our time insofar as events are more unreadable than ever before.

Yet what is known, is that we are in an environment of high government debt, low growth, and negative real interest rates that are destroying savings.

These conditions combined with fiscal deterioration and a lack of confidence in financial systems, create an environment in which Brooks says gold does well.

Supply and demand also continues to be a positive fundamental because it is becoming more difficult to pull gold out of the ground. Investment demand is expected to continue to be strong this year. Many market watchers suggest that low prices may actually attract investors instead of scaring them off and central banks are expected to continue increasing their positions in the metal.

While the 2012 gold outlook is positive, gauging just how positive it is, is another matter. Gold price forecasts are inconsistent. Last month, BNP Paribas, for example, lowered their prediction by $250 to $1,775. Yet, institutions such as Barclay’s and UBS are looking for gold to reach or exceed $2,000.

Therefore, investors may want to heed the less assuming advice of those who say look for gains but expect them to be more modest than those seen in the past. And that, which says if you are in the game, for best results, go long.