What are environmental commodities, and how can investors get exposure to this growing market? Anthony Milewski of Nickel 28 Capital explains.

Perhaps the best known of these are carbon credits, which are split into two types of markets. The first, known as the Compliance Markets, are essentially a cap-and-trade affair backed by the EU, Canada and a variety of other nation states worldwide, as well as the US state of California. The system puts a price on each metric tonne of carbon emitted by certain industries, and by doing so penalizes polluters who are forced to offset emissions with the purchase of credits. In addition, the cap normally shrinks each year, which in turn ensures that prices are steadily pushed upwards.

Then we have the less structured Voluntary Markets, which enable companies and consumers to voluntarily offset their carbon emissions by purchasing available credits. Pricing is more volatile, but as the industry continues to mature, both the Voluntary and Compliance Markets have seen a growth trajectory that surpasses even the most enthusiastic projections of a few years ago. The sector has yet to open up to the retail market in any meaningful way, but there are signs that this is changing.

Part and parcel of the carbon credits industry are carbon offsets. As the name suggests, these are projects that offset carbon generated by human activity. Reforestation and protection of biomes such as old-growth forests and marine-based mangrove forests, along with the installation of renewable energy such as wind and solar, are all examples of carbon offsets.

These projects are not monitored by government agencies, but instead are inspected, categorized and validated by one of the major carbon credit verification organizations. Once approved and rated, these projects can generate carbon credits for their backers; the credits can then be bought and sold on the marketplace.

How can you get exposure to all of these credit-related investment opportunities? If you’re an individual retail investor it can be tricky — you’re going to need the right broker and potentially a significant amount of money. There are private companies offering exposure, some of which have announced their intention to list later this year, such as Canadian entrant Carbon Streaming, but as yet there is no dedicated exchange. That said, there are exchanges such as the Carbon Trade Exchange, CLIMEX and CBL Markets, which offer a selection of environmental commodity-focused products with varying degrees of accessibility for the average investor.

As climate change sinks deeper into the collective awareness of consumers around the world, we’re seeing increased pressure on politicians that, over time, is going to deliver increased regulation. We will also start to see pressure on companies, going as far as to include boycotting of goods and services, that have a harmful impact on the climate. Thanks to these factors, it’s clear that the environmental commodities basket is larger than most people realize, and it’s only going to get bigger.

You see, all of the science agrees that successfully tackling climate change means going beyond simply reducing our carbon output — that means reducing the use of other commodities that directly harm the climate. Just like carbon, a price will be put on those commodities because of their relationship to the climate, and suddenly we have another environmental commodity.

A great example sitting high on the climate offenders list is methane — a global warming gas that far exceeds carbon dioxide in terms of damage.

I’m not talking about the trillions of tonnes of methane locked in the frozen northlands of Russia and Canada, vast quantities waiting to be released if we fail to curb the warming of the planet. I’m talking about methane generated by livestock farms, by fermenting organic matter in landfills, by the refining of coal and natural gas. I’m talking about the methane used by factories and refineries around the world to power engines and turbines, and as an integral part of producing goods such as plastic, fabric, pulp and paper.

Methane is a big polluter and we use and generate a lot of it. For some industries, alternatives can and will be found that will either result in the reduction or even the removal of methane as a requirement. However, this simply isn’t going to be possible for every business and every industry. Thus, the future of methane will include rising costs for emissions and usage, and increasing prices for associated goods and services.

If you’re wondering how long we’ll have to wait until we see action, the response can only be … not long. Let’s look at the overarching umbrella of environmental and social governance (ESG). In recent years, ESG has become the number one rated priority for North American and European fund managers, who collectively control trillions of dollars. These funds are lighting big fires under corporations, demanding wide-ranging and measurable pro-climate investment and action. At the same time, a wide variety of governments are simultaneously promoting green economies while looking at increasing the scope of regulations for polluting industries.

So as an investor interested in environmental commodities, you need to start thinking in terms of, “How is our way of life affecting and affected by climate change? What can we reduce? What can we replace? What is irreplaceable and so must be offset and taxed?” At present, this could mean having to trade things like futures, which admittedly is out of reach for many retail investors. However, as awareness grows about the deep ways in which economies and the climate are connected, change is being driven in ways that we can’t yet predict. Be ready to act quickly as more commodities get added to the environmental basket and subsequently explode in value. 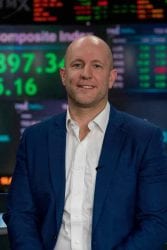 OPINION — Should You be Positioning for Decarbonization? Part 1