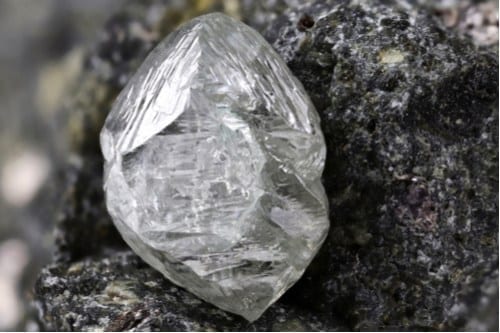 Dr. Leon Daniels of Pangolin Diamonds told attendees at a diamond event about his use of termite hills to identify kimberlites in Botswana.

As mining technology advances, it’s easy to forget the long and low-tech history of the sector, when prospectors headed out on foot to find deposits with little more than a shovel and intuition.

Of course, there were things they could look for that might help them pinpoint an area to explore. Differences in typography, proximity to water resources and indications of wind erosion were some of the visual indicators prospectors would look for.

And then there are termite hills.

At the second annual Northern Miner Diamond Symposium in Toronto on June 20, Dr. Leon Daniels, president, CEO and director of Pangolin Diamonds (TSXV:PAN), told attendees about his use of termite hills to identify kimberlites in Botswana.

“Most people understand that termites have a major impact on their life when they are eating up their wooden house, so the economic contribution is normally seen as negative. But you could take the history of Botswana, which was one of the poorest countries at the time of independence; termites have had a major positive effect on the economics of Botswana. Without termites, Botswana would not be where it is today,” said the geologist, who has a long history of diamond discovery.

Early in his career, while working in Botswana, Daniels began using the giant termite hills spread over the savannah to figure out where kimberlite deposits could be found.

As he explained to the audience, termites are great at construction and will build elaborate hills with debris, waste and plant material. It is these mounds that hide the secret of what is buried deep below. As the termites dig into the sand to bring damp mud and water to the surface to construct their hills, they also carry ilmenite and garnet anomalies or indicators, which are only present in kimberlite pipes, alluding to a diamond deposit underneath.

“Termites are the only transport mechanism (for) indicators from the kimberlite to the surface — there is no other way of getting indicators, since over 90 percent of the country is covered by desert environmental formations. It’s like a thick blanket,” he explained. “You need a way of getting the indicators to surface. And my friends the termites do that.”

Botswana’s macrotermes termites are considered to be the largest termites in the world, and the mounds they construct can be almost 10 feet high and weigh more than a tonne. The complex mounds the termites create can take five years to build and are in a constant state of build or repair.

The macrotermes termites aren’t the only termite excavators that are helpful to prospectors. The hodotermes termite, another resident of Botswana, doesn’t erect giant mounds, but instead builds an elaborate array of networks beneath the Earth’s surface.

Rather than filling their mounds with kimberlite indicators, Daniels discovered that these termites create several aeration holes over an area; the debris around these ventilation openings can also hold the ilmenite and garnet indicators that geologists are looking for.

Daniels recounted how UK-based Petra Diamonds (LSE:PDL) was able to use termite indicators to help discover a kimberlite.

“They increased their sample size to 200 meters, which was unprecedented, and they managed to find nine garnets in one sample right on top of the kimberlite,” he said.

He pointed to the Petra find as evidence that termites can travel to great depths and return viable indicators to surface. “People are wondering how far little termites go. Well, Petra is under 80 meters of cover, and I believe they can go down at least 100 meters,” said Daniels.

No one disputes that termites are an incredibly low-tech way to identify potential deposits, and using the tiny insects is also incredibly affordable. Deposits of all resources globally are harder to find, which is also more expensive.

Whether it’s reviewing historical data, or looking to insects for help, it’s important that explorers use everything available to find the next big discovery.

Daniels, whose company is ironically named after an African ant (and termite) eater, sees value in revisiting old science to better understand how different species impact and interact with their environments as a way of understanding resource deposits.

The Largest Diamonds Mined in 2020, So Far…
Diamonds and COVID-19: Who’s Reacting and How?
Lucara and Louis Vuitton Team Up on Rare Diamond
Rare Earths Outlook 2020: Trade War to Dominate Supply and Demand