Standard Uranium (TSXV:STND) (Frankfurt: FWB:9SU) is pleased to announce that drilling is progressing as planned on the Phase 1, 2020 summer diamond drilling program, at its flagship 25,886 hectare Davidson River Uranium Project

Standard Uranium Ltd. (“Standard Uranium” or the “Company”) (TSXV:STND) (Frankfurt: FWB:9SU) is pleased to announce that drilling is progressing as planned on the Phase 1, 2020 summer diamond drilling program, at its flagship 25,886 hectare Davidson River Uranium Project (the “Project”).  The Project is located in the Southwest Athabasca Uranium District of the Athabasca Basin, Saskatchewan, and runs along the inferred trend of Fission Uranium’s Triple R deposit and NexGen’s Arrow deposit, in an area lying 25km to 30km to the west of those deposits.

To date, six drill holes have been completed at the Warrior Trend. (See Figure #1.) The exceptional work by the team at Aggressive Drilling Ltd. has been crucial to the early success of the program. Drilling is ahead of schedule and on budget. Highlights from the first six drill holes on the Davidson River Property include: 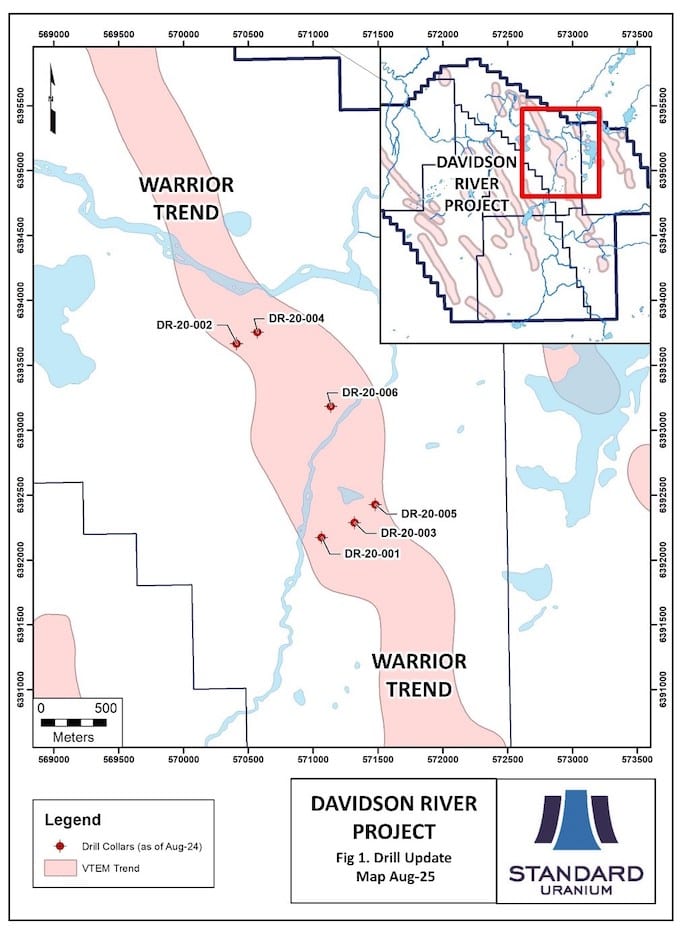 Jon Bey, President, CEO and Chairman commented: “I am extremely pleased how our inaugural drill program has developed to date. This is an exciting time for our team of geologists as we receive the fresh drill core each morning. We have focussed on testing the highest priority geophysical trend on the property, the Warrior Trend and we have surpassed our expectations so far, not only by proving the right rock types, but also identifying basement alteration and structure. We will be using this information to guide our work as we search for high-grade uranium mineralization.”

Drill holes will continue to be completed approximately 100-200 metres along-strike in the high-priority area of the Warrior Trend, and spaced farther apart along the remainder of the trend. The first batch of core samples has been safely shipped to the Saskatchewan Research Council lab in Saskatoon, and the first round of whole rock geochemical results are expected within approximately two weeks.

The Company also announces it has retained Generation IACP Inc. (“Generation”) to provide market making services with the objective of maintaining a reasonable market and improving the liquidity of its Common Shares. Under the agreement between Generation and the Company (the “Generation Agreement”), the Company has agreed to initially pay Generation a fee of $7,500 plus applicable taxes, per month. Generation will not receive any Common Shares or options as compensation. Generation does not currently own any securities of Standard Uranium; however, Generation and its clients may acquire a direct interest in the securities of the Company. Standard Uranium and Generation are unrelated and unaffiliated entities. Generation is a member of the Investment Industry Regulatory Organization of Canada and a member firm of the Toronto Stock Exchange and the TSX Venture Exchange. The initial term of the Generation Agreement will last 6 months, and such term will be automatically renewed for subsequent 6-month periods unless terminated earlier by 30 days’ prior written notice.

The scientific and technical information contained in this news release has been reviewed and approved by Neil McCallum, VP Exploration and is a “Qualified Person” as defined in NI 43-101.

We find the fuel to power a clean energy future

Standard Uranium is a mineral resource exploration company based in Vancouver, British Columbia. Since its establishment, Standard Uranium has focussed on the identification and development of prospective exploration stage uranium projects in the Athabasca Basin in Saskatchewan, Canada. Standard Uranium’s Davidson River Project, in the southwest part of the Athabasca Basin, Saskatchewan, is comprised of 21 mineral claims over 25,886 hectares. The Davidson River Project is highly prospective for basement hosted uranium deposits yet remains untested by drilling despite its location along trend from recent high-grade uranium discoveries. A copy of the 43-101 Technical Report that summarizes the exploration on the Project is available for review under Standard Uranium’s SEDAR issuer profile (www.sedar.com).

Neither TSX-V nor its Regulation Services Provider (as that term is defined in the policies of the TSX-V) accepts responsibility for the adequacy or accuracy of this release.

Click here to connect with Standard Uranium Ltd. (TSXV:STND) for an Investor Presentation.