Brent crude futures climbed to a one-week high on Monday after economic data hinted that November saw a growing manufacturing sector in China, Europe and the United States. 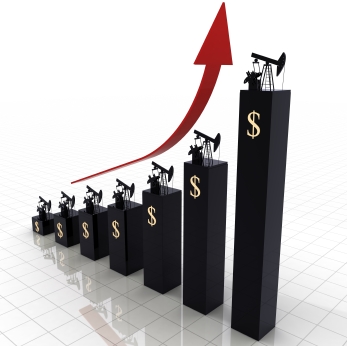 Brent crude futures climbed to a one-week high on Monday after economic data hinted that November saw a growing manufacturing sector in China, Europe and the United States.

The positive stream of news renewed the prospects for increasing energy demand. Oil for January delivery was up $1.10 to settle at $93.82 per barrel on the New York Mercantile Exchange. Meanwhile, across the pond, Brent crude for January also performed well, climbing $2.64 to $112.43 per barrel on ICE Futures Europe. According to the Wall Street Journal, the European benchmark, considered to be the gauge of global oil prices, has not traded near $112 since mid-October.

Andy Lipow, president of Lipow Oil Associates, told the WSJ that “Better news on the manufacturing front, will translate to better economic growth and higher demand for oil.”

Oil started on its up-trend following a reading from China’s official Purchasing Managers’ Index which came in at 51.4 for November. The number is better than what economists had been expecting, DowJones wrote. A figure above the 50-level usually signals expansion. But China was not the only one with a boost in it’s PMI figures. The U.K.’s factories saw the most activity since February 2011. According to data provided by Markit and the Chartered Institute of Purchasing and Supply’s monthly PMI, the U.K. saw a boost in its November figures, climbing to 58.4 in November from Octobers 56.5. And finally, the U.S. saw an unexpected climb to 57.3 last month, compared to the previous month’s 56.4.

“It’s all about these manufacturing numbers…they really kick-started a really in crude that we haven’t seen in a few weeks,” Matt Smith, author of The Daily Distillation, an energy newsletter and an analyst at Schneider Electric SA (SU.FR), told DowJones.

Were it not for the positive economic news, Monday’s price movements might have registered slightly differently as concerns over a glut of crude supplies -predominantly in the U.S.- were abated ahead of a meeting scheduled for Wednesday.

The Organization of Petroleum Exporting Countries (OPEC) have said that it is satisfied with oil prices at their current levels, as well as global supply and demand levels. That being said, OPEC will be keeping its oil output limit as is. Currently, OPEC has an output ceiling of 30 million barrels of oil per day.

“The market is in the best position it can be,” Saudi Arabia’s Oil Minister Ali al-Naimi told reporters in Vienna, adding that ““Supply and demand are in equilibrium, inventories are in a good position.”