Armed with a Korean partner, Frontier Rare Earths plans to put its Zandkopsdrift deposit in South Africa into production by 2016. 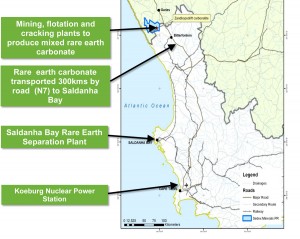 Frontier Rare Earths Limited (TSX:FRO) the Toronto-based company that is developing the Zandkopsdrift rare earth element project in South Africa, on Friday provided an update on the project including improvements to its flow sheet outlined in studies completed during the third quarter.

Frontier has stated that Zandkopsdrift would be one of the first new producers of high-purity, separated rare earth oxides outside China. Frontier is targetting production in 2016, with capacity for 20,000 tonnes per year of separated REE oxides, including critical rare earth oxides (CREOs) dysprosium, terbium, europium, neodymium and yttrium. CREOs tend to be rarer, in higher demand, and therefore fetch higher prices, than the other 12 rare earth elements.

The other feather in Frontier’s cap is its joint venture partnership with Korea Resources Corporation (KORES). Under the JV, KORES, a Korean state-owned entity, must fulfill certain milestones to acquire up to a 30 percent interest in the project, in exchange for 31 percent of the mine’s production. The JV also invites some of Korea’s largest industrial giants, including Samsung, (KRX:005930) Hyundai (KRX:005380) and Daweoo Shipbuilding & Marine Engineering Group (KRX:042660) to form a consortium that would purchase rare earths for industrial end uses.

Among the highlights of its update on Friday, Frontier said the prefeasibility study flow sheet is expected to yield a higher proportion of CREOs being produced, resulting in a basket price, once Zandkopsdrift begins production, of $44 per kilogram (current FOB China) compared to an insitu basket price of $36/kg.

“The Company is confident that, taking into account the higher expected capital and operating costs than those in the Preliminary Economic Assessment in Q1 2012 and the pricing premium that can be achieved with the proposed Zandkopsdrift production mix, Frontier remains well positioned to become a major new producer of high purity separated rare earths,” Frontier Rare Earths stated in its press release.  Shares in the company rose 2.35 percent to close at $0.435 in Toronto on Friday.

Matamec Explorations (TSXV:MAT) released an economic benefits study saying that its Kipawa rare earths mine in the Abitibi-Temiscamingue region of Quebec would create 2,400 jobs during its two years of construction and pump $212 million into the Quebec economy. The 15-year mine would create 408 direct and indirect jobs and spin economic impacts worth $61.9 million annually, according to the report by KPMG-Secor. However the economic benefits of the mine are being compared to its environmental risks. As of last Wednesday almost 2,600 people had signed an online petition opposing the mine, reported Nugget.ca. Concerns center around toxic tailings and waste rock being exposed to the elements, and potential spills into Lake Kipawa.

Texas Rare Earth Resources Corp (OTCMKTS:TRER) announced that notable rare earth expert Jack Lifton has joined its board of directors. Lifton is a co-founding principal of Technology Metals Research LLC and a senior fellow of the Institute for the Analysis of Global Security. ”We are honored to have Jack join our board. Now that we have demonstrated we can successfully process the rock at our Round Top Project, our principal objective is to monetize our asset base while informing the investing and mining community of the value we believe our company possesses. We believe Jack’s expertise will assist us in reaching these goals,” said Dan Gorski, CEO of Texas Rare Earth Resources.

Vancouver-based Medallion Resources Ltd (TSXV:MDL) is making headway on its plan to set up a rare earth extraction plant in Oman. Oman Daily Observer reported that Medallion is planning to commission a monazite-based plant at the Duqm Special Economic Zone in the first quarter of 2016. The plant would be a joint venture between Medallion, owning 60 percent, and a subsidiary of state-owned Oman Oil Company holding the balance. The plant would be capable of producing a concentrate containing 10,000 tonnes of rare earth oxides annually, according to the publication.

Tasman Metals Ltd. (TSXV:TSM) has acquired a 100% interest in a portfolio of tungsten projects in the Bergslagen mining district of south-central Sweden. The portfolio includes several of the largest known tungsten occurrences in Scandinavia, including the former Yxsjoberg mine which once produced more than 90% of Sweden’s tungsten. Tasman is focused on its North Karr heavy rare earth element project in Sweden.

Rare earth oxide prices were mostly flat over the past week. Metal-Pages reported that European cerium oxide prices are unchanged at $6 to $7 a kilogram. “Spot market purchases of cerium oxide appear to have slowed with industry buyers holding out for cheaper material as stocks are abundant and with falls in the US dollar,” the publication reported.

Chinese neodymium metal and oxide prices were both down, a respective 1.10 percent, and 0.57 percent. Samarium oxide in China fell 5.88 percent to a range of between RMB 23,000 and 25,000, reported Metal-Pages.