Rare earth elements (REE) have occupied a quiet corner of the mining industry since the late 1950s, but their unique properties have made them crucial to a number of emerging and growing technologies, increasing their demand and strategic importance.

Despite their name, Rare Earth Elements are found in relative abundance around the world, but it is rare to find a commercially viable deposit. Officially, the International Union of Pure and Applied Chemistry defines Rare Earth Elements as the 15 Lanthanide elements, plus Scandium and Yttrium. These elements are grouped together on the periodic table and share similar chemical properties, often making them interchangeable in their commercial applications ranging from use in catalysts and computers, to magnets, cell phones and hybrid cars. 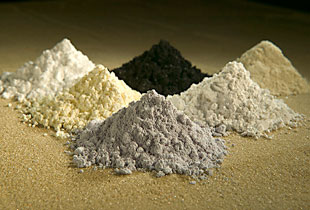 Rare Earth Elements can be further divided into two sub-groups using their atomic weight: Heavy Rare Earth Elements (HREE) and Light Rare Earth Elements (LREE). HREE are the more sought after of the two types and more valuable. Europium, Gadolinium, Terbium, Dysprosium, Holmium, Erbium, Thulium, and Ytterbium are all considered HREE; and due to their characteristics, Yttrium and lutetium are also sometimes included in this group.

LREE include Lanthanum, Cerium, Praseodymium, Neodymium, Promethium and Samarium, which are generally more abundant and less valuable than the heavier HREE.  Yiropium, Tirbium and Desposium are exceptions and quite valuable.

The Rare Earth Element market is inherently more complex than markets for more traditional resources, like gold or copper, because it is made up of so many different minerals, but it is the extraction process that truly complicates Rare Earth Elements, which are found clumped together in mineral deposits.

China currently produces over 95 percent of the world’s rare earth supply, mostly in Mongolia, but high concentrations have also been identified at Mountain Pass, California, and Mount Weld, Australia.

Once the rare earth ore has been removed from the mineral deposit, the difficult task of separating the different minerals into oxides begins.  Because the elements share similar characteristics, the separation process is complex and it can vary from one mineral resource to another. A deposit could contain a number of different metals; but, with no processes available to extract them all a company might have to focus on one element at the expense of another.

Once the different minerals have been refined into oxides they are formed into rare earth alloys before they are manufactured into their applications.