Quest Rare Minerals has filed a Notice of Intention to Make a Proposal under Part III of Canada’s Bankruptcy and Insolvency Act.

An unnamed industrial conglomerate’s decision not to proceed with its investment in rare earths firm Quest Rare Minerals (TSX:QRM) has left the company in financial turmoil.
According to Quest, it signed a memorandum of understanding regarding the potential investment on November 2, 2016. The conglomerate reportedly has interests in construction, mining and hydrocarbons.
Quest said on Wednesday (July 5) that it has filed a Notice of Intention to Make a Proposal under Part III of the Bankruptcy and Insolvency Act, Canada. Under the Notice of Intention, PwC has been appointed the trustee for the firm’s proposal proceedings, and will help Quest with its restructuring efforts. Quest has also been granted a 30-day stay of proceedings that protects its assets from creditor claims.


Grab Your Free Report
Quest recently applied for a TSXV listing as a “cost saving measure,” and obtained an international patent for its selective thermal sulfation process, which it bills as an “eco-friendly” method of producing mixed rare earth metal oxides. Given that activity, the restructuring announcement came as a surprise to many market watchers and investors:

The news also generated a number of comments on Stockhouse: 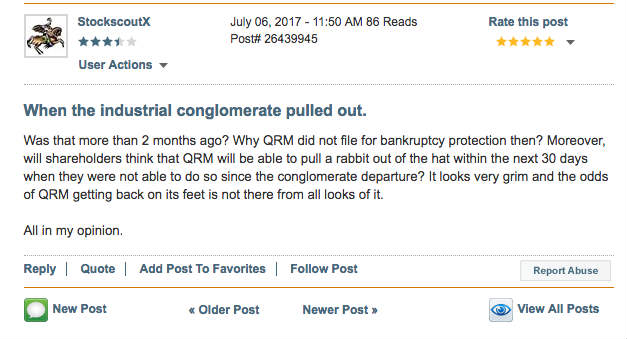 Quest is one of a handful of rare earths-focused companies developing projects in Canada in an effort to lessen China’s dominance on rare earths production. There was no rare earths mining in North America in 2016, according to US Geological Survey data. Quest was focusing on its Strange Lake property in Northern Quebec, which contains neodymium, terbium, dysprosium and praseodymium.
In a 2014 report, Natural Resources Canada identified 11 rare earths projects in Canada, but estimated that only five of those projects, including Quest’s Strange Lake, could reach production by 2018 to 2019. For investors interested in Canadian rare earths projects, the other three publicly traded companies identified in the government report are: Avalon Advanced Materials (TSX:AVL), Matamec Explorations (TSXV:MAT) and Pele Mountain Resources (TSXV:GEM).
Don’t forget to follow us @INN_Resource for real-time news updates!
Securities Disclosure: I, Melissa Shaw, hold no direct investment interest in any company mentioned in this article.