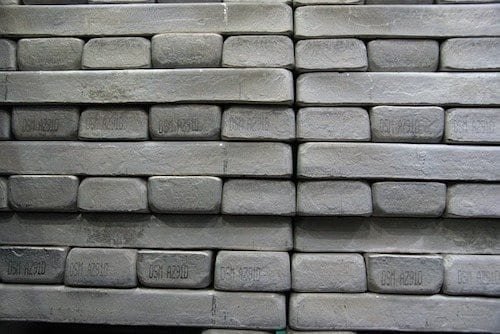 Wondering how to invest in the magnesium mining market? We’ve put together a brief guide for those interested in this metal.

Magnesium is needed for over 300 biochemical reactions and is deemed vital for healthy bones and good circulation. Magnesium oxide is produced when magnesium and oxygen combine and is commonly used in heartburn and indigestion remedies. However, many magnesium compounds also play a key role in various industrial applications.

Not to be confused with manganese, which is also crucial for the development of a healthy body, magnesium is one of three secondary plant nutrients, along with sulfur and calcium, that are found in abundance on land and in water.

The metal is 40 percent lighter than aluminum, but as strong as steel, making it crucial for strengthening aluminum alloys. It can be found in airplanes, automobile parts and in electronic devices that benefit from being lightweight. Magnesium is also used to remove sulfur when iron and steel are produced, and to inoculate cast iron. Magnesium carbonate salts are primarily used in calcining, as well as in the agricultural and construction sectors.

Magnesium’s wide array of high-tech applications make it a compelling mineral investment, but it is often difficult for investors to find information about the magnesium mining market. Here’s a quick overview of magnesium supply and demand dynamics, as well as a brief introduction to investing in the metal.

Demand for magnesium has grown steadily in recent years, driven largely by the car parts industry, where magnesium is used for die casting. Specifically, magnesium can be found in car steering wheels and support brackets. The related magnesium exploration and mining sector has also experienced an uptick in production.

According to Roskill, global growth in the magnesium market is expected to average 3.4 percent per year, reaching almost 1.2 million tonnes per year by 2020. The firm expects aluminum alloys and die casting to be the fastest growing markets, at about 4 percent per year each.

Over 80 percent of the magnesium produced in the world comes from Chinese mineral deposits. According to the US Geological Survey, China’s magnesium production increased in 2017 after falling in 2015 for the first time since 2009. Other major high-purity magnesium producing countries include Israel and Russia; Russia also holds the highest magnesium compounds reserves in the world at 2,300,000 metric tons.

While magnesium is naturally occurring, the extraction process does have environmental impacts and can be taxing on the Earth, not unlike other facets of the mining industry.

Magnesium mining market: How to invest

As with many other critical metals, there is no formal magnesium market. For that reason, it is difficult to gain exposure to the metal. However, one way to do so is to invest in companies that mine magnesium.

In a 2015 article, Chris Berry of the Disruptive Discoveries Journal noted that China is home to many magnesium producing companies, though some exist in other locations as well. A large number of these companies are private, or are not listed on common exchanges.

Investors also have the option of using junior miners — focused on exploration and discovery, rather than mining and processing — to gain exposure to magnesium. A few options are below; all companies are listed on Canadian, US and Australian exchanges, and had market caps above $5 million as of April 26, 2019:

Editorial Disclosure: MGX Minerals and West High Yield Resources are clients of the Investing News Network. This article is not paid-for content.