Opportunistic commodity investors can still position themselves for profits even in the midst of a bear market. 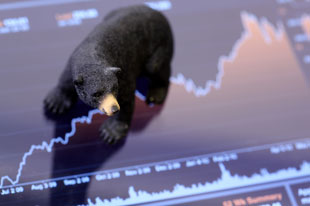 Opportunistic commodity investors can still position themselves for profits even in the midst of a bear market. Historically, business cycles change, but a market downturn does not need to translate financial Armageddon. In fact, sometimes market contraction affords traders the opportunity to unload losing bets and prepare for the next wave of expansion.

Few investors are astute enough to know when the tide in the markets is changing. Even some of the most sophisticated hedge fund managers in the world still lose money in the commodity markets. In May 2011, after crude oil soared to more than $100 per barrel and gold was trading at approximately $1,500 an ounce, the commodity markets retreated abruptly and left many scrambling.

“Most hedge funds lost money in May as risk assets experienced a sharp reversal due to concerns about the global economic recovery. Commodities took the biggest hit, with silver declining 21 percent and oil falling 10 percent during the month,” said Lee Hennessee, Managing Principal of Hennessee Group in a press release. Indeed, hedge funds tumbled approximately 1.3 percent in May 2011, according to Hedge Fund Research cited in Reuters.

Other fund managers recognized early signs that bull runs cannot last forever, and did not wait around for the fallout. In May 2011, even in the wake of record gold prices, Robert Marquardt, founder of hedge fund firm Signet, liquidated his gold-denominated portfolio under the premise that the price for the precious metal simply could not be sustained. “Gold at $1,500 is now a speculation. It’s no longer a store of value,” he told Reuters. “Everyone apart from the U.S. has got rising interest rates, and economic growth is probably going to slow,” Marquardt added.

When it becomes clear that commodities are in correction mode, there are still ways to play the markets. Traders can use falling prices as a backdrop to increase exposure to those commodities that remain attractive long-term plays and shedding excess risk, according to Hennessee Group. “Several managers used the sell off to add to high conviction core positions and reduce higher beta names,” said Hennessee. This is a strategic way of capitalizing on cheaper prices, safeguarding against further losses, and positioning an investment portfolio for an eventual rebound.

The long & short of it

Hedge funds are common participants in the commodity markets. These traders are not known to only take long positions in the markets, or betting that the value of commodities will rise. Shorting, or using leverage to bet on a commodity’s decline, represents another way that investors can use a bear market to profit.

In February 2011, Dennis Gartman, Editor of The Gartman Letter, explained on CNBC why the commodity markets were due for a correction. A market correction appeared imminent because of the herd mentality that placed most commodity traders in long positions. “You’ve got too many people on one side of the boat and the boat needs to be corrected,” he said.

If it appears that commodity prices have peaked and that a bear market might be just around the corner, traders can begin positioning themselves for market contraction early. In June 2011, commodity market participants gathered in Monaco to discuss the recent bull run that had unfolded in metals. The consensus was that prices, which had been on a tear for several years, reached a peak. Bull market conditions, including low interest rates, were reversing and this served as a warning to some that so too would the lofty price for gold and other precious metals.

Instead of going long, another way that traders might choose to play a bear market is to invest in exchange traded funds (ETFs) with short positions in commodities. These index funds trade inversely to some market barometer and profit from a bear market. For example, bond investment firm PIMCO oversees a fund that uses shorting strategies in commodity-linked derivatives. Deutsche Bank runs a gold exchange traded note (ETN) that is deemed risky but has the potential to outperform commodity market activity.

Despite the twists and turns that commodity markets can take, traders do not need to sit on the sidelines during times of economic uncertainty. Instead, traders can continue to protect and grow assets by capitalizing on changing demand. Time and time again, certain commodities have demonstrated a tendency to rebound from losses and return to record levels even through the most unsure market conditions.