Piedmont Lithium Limited is pleased to announce that it has received a Clean Water Act Section 404 Permit from the US Army Corps of Engineers.

Piedmont Lithium Limited (“Piedmont” or “Company”) (ASX:PLL, NASDAQ:PLL) is pleased to announce that it has received a Clean Water Act (“CWA”) Section 404 Standard Individual Permit (“Section 404 Permit”) from the US Army Corps of Engineers (“USACE”) for the Company’s 100% owned Piedmont Lithium Project (“Project”) in North Carolina, USA. The USACE completed an Environmental Assessment (“EA”) of the Project in conjunction with six other state and federal agencies based on Piedmont’s December 2018 permit application and the Company’s responses to agency and public comments. The EA resulted in a Finding of No Significant Impact for the Project. The Section 404 Permit is the only federal permit required for the proposed mine and concentrator.

The Company has also received a CWA Section 401 Individual Water Quality Certification from the North Carolina Division of Water Resources. HDR Engineering’s Charlotte Office acted as lead consultant in the preparation of both permit applications.

The 404 and 401 permit approvals were achieved on the Company’s planned permit timeline originally announced in April 2018 and represent a major milestone in the development of the Project. 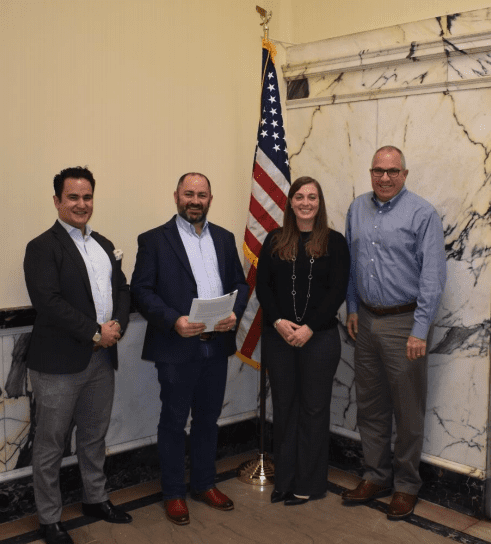 Keith D. Phillips, President and Chief Executive Officer, commented: “Securing a Section 404 Individual Permit is a major milestone for any natural resource project in the United States, and we are very pleased to have received this authorization. I want to thank our team members and advisors who have worked so diligently and cooperatively throughout this rigorous process, and also express our thanks to the Army Corps of Engineers for the highly professional manner in which they have approached this Project from day one. We will now move forward with the permitting of our chemical plant operations during 2020. Our project is unique in being the only spodumene-to-hydroxide project in the United States, and now also stands out as the most advanced American lithium project from a permitting perspective. We are very excited about the important milestones ahead of us as we look to deliver a DFS for a fully permitted integrated project by the end of 2020.”

Piedmont Lithium Limited holds a 100% interest in the Piedmont Lithium Project (“Project”) located within the world-class Carolina Tin-Spodumene Belt (“TSB”) and along trend to the Hallman Beam and Kings Mountain mines, historically providing most of the western world’s lithium between the 1950s and the 1980s. The TSB has been described as one of the largest lithium provinces in the world and is located approximately 25 miles west of Charlotte, North Carolina. It is a premier location for development of an integrated lithium business based on its favorable geology, proven metallurgy and easy access to infrastructure, power, R&D centers for lithium and battery storage, major high-tech population centers and downstream lithium processing facilities.

The information contained herein has been prepared in accordance with the requirements of the securities laws in effect in Australia, which differ from the requirements of United States securities laws. The terms “mineral resource”, “measured mineral resource”, “indicated mineral resource” and “inferred mineral resource” are Australian mining terms defined in accordance with the 2012 Edition of the Australasian Code for Reporting of Exploration Results, Mineral Resources and Ore Reserves (the “JORC Code”). However, these terms are not defined in Industry Guide 7 (“SEC Industry Guide 7”) under the U.S. Securities Act of 1933, as amended (the “U.S. Securities Act”), and are normally not permitted to be used in reports and filings with the U.S. Securities and Exchange Commission (“SEC”). Accordingly, information contained herein that describes Piedmont’s mineral deposits may not be comparable to similar information made public by U.S. companies subject to reporting and disclosure requirements under the U.S. federal securities laws and the rules and regulations thereunder. U.S. investors are urged to consider closely the disclosure in Piedmont’s Form 20-F, a copy of which may be obtained from Piedmont or from the EDGAR system on the SEC’s website at http://www.sec.gov/.