Lake Resources NL (ASX:LKE) announced today new definitive results from detailed packer sampling from its 100% owned Cauchari Lithium Brine Project that compare favourably to the world-class neighbouring project moving to production next year, reaffirming the Company’s confidence in Cauchari’s potential in the heart of the Lithium Triangle. Please see the table below showing the range of lithium grades and intervals.

Major Chinese producer Ganfeng Lithium has invested a combined US$397 million, including debt support, to acquire a 50% stake in its Cauchari project, demonstrating the value of such projects in the Lithium Triangle, home to half the world’s lithium output at the lowest cost.

Lake’s Managing Director Steve Promnitz said: “Lake is drilling next door to the largest defined lithium brine resource on the planet and our assay results mirror the grades of this project. These latest results have only further strengthened our recognition of the Cauchari project as a major discovery adding value for shareholders, given the prices paid for investment in nearby projects. In addition, this is now a wider pay zone of lithium brines than at the adjoining project. To use an analogy, we are in the same swimming pool, filled with sand, clay and lithium brines, and we still have more to come.”

“While Cauchari is a potential company-maker for Lake, we are determined to fully exploit the value of our project pipeline. Following Cauchari, we are planning a new drilling program at our 100% owned Olaroz Lithium Brine Project, to test the same basin that also hosts current production. This has potential to be another standalone project to add to our exciting discovery at Cauchari and confirmed deposit at Kachi.

“Analysts continue to upgrade their forecasts for the lithium market, with Benchmark Mineral Intelligence and Wood Mackenzie both pointing to a major supply deficit by the early-to-mid 2020s and Macquarie analysts turning bullish as a result of automakers’ expansion plans for electric vehicles.

Table 1: Summary lithium results and intervals from the drillhole at Cauchari .

(*) Arithmetic average of values across interval without consideration of total interval. Final total interval values may change. (*1): Cauchari-Olaroz Mineral Resource Statement of Lithium Americas/Ganfeng joint venture in a NI 43-101 Technical Report filed 1 April 2019 on the TSX-V, prepared by Ernest Burga (P.Eng), David Burga (P.Geo), Wayne Genck (P.Eng) and Daniel Weber (P.G., RM-SME) each of whom is a qualified person for the purposes of NI 43-101, available publicly on SEDAR.

(*2): Cauchari Mineral Resource Statement of Advantage Lithium/Orocobre joint venture in a NI 43-101 Technical Report filed 19 April 2019 on the TSX-V and ASX, prepared by Fritz Reidel (CPG), who is a qualified person for the purposes of NI 43-101, available publicly on SEDAR. 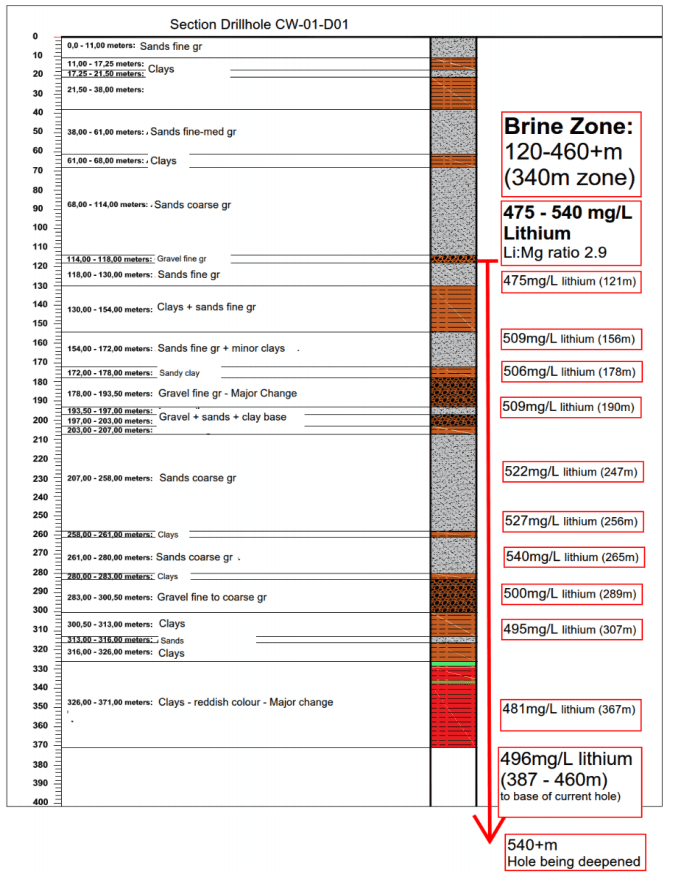 Figure 1: Updated section of drillhole at Cauchari with the 340+m brine zone, results and geological comments. 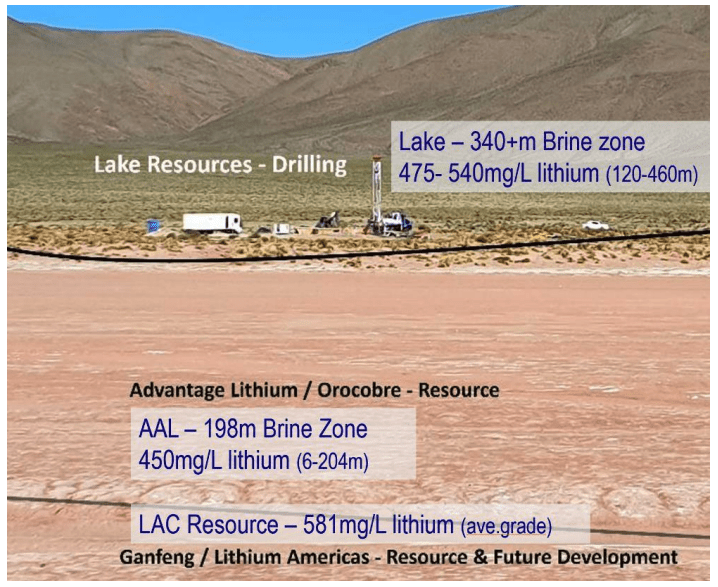 Figure 2,3: Location of LKE’s drill operations at Cauchari in relation to Advantage Lithium/Orocobre & Gangfeng/Lithium Americas leases. (Note: The marked boundaries are indicative only. Please refer to the detailed map). 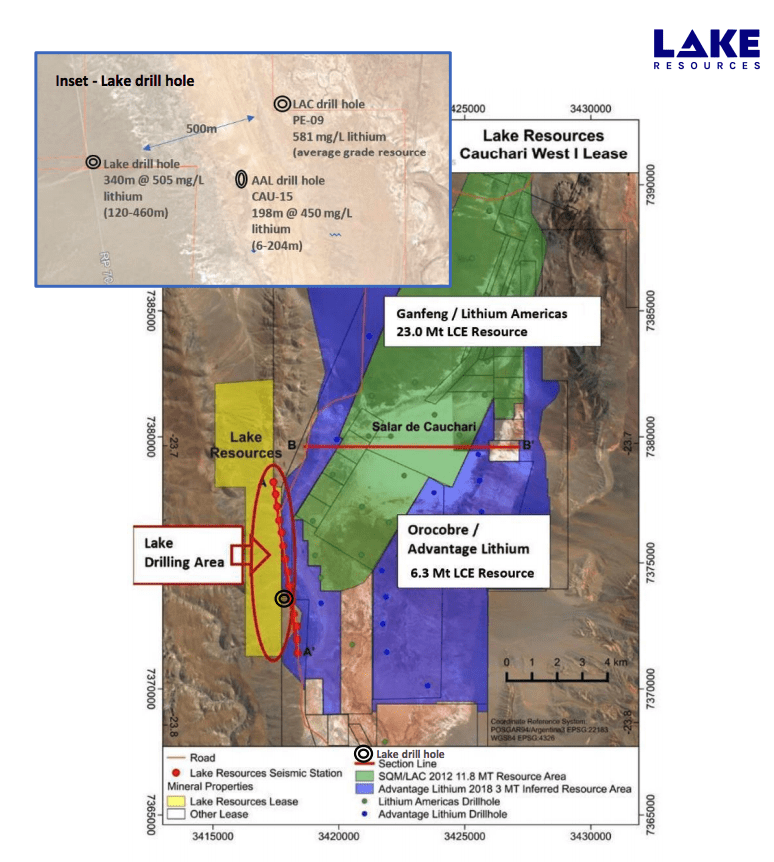 A direct extraction technique is being tested in partnership with Lilac Solutions, which has shown 80-90% recoveries and lithium brine concentrations in excess of 25000 mg/L lithium. Phase 1 Engineering Study results have shown operating costs forecast at US$2600/t LCE in the lowest cost quartile (refer ASX announcement 10 December 2018). This process is will be trialed on site with a pilot plant in tandem with conventional methods as part of the PFS underway. Discussions are advanced with a number of downstream entities, mainly battery makers, to jointly develop the project.

The Cauchari project has shown high grades and high flow rates from a series of horizons over 288 metres, with up to 538 mg/L lithium, similar to lithium brine horizons announced from adjoining pre-production areas under development. Results provide confirmation of the continuity of lithium bearing horizons from adjoining world-class major projects (refer ASX announcements 28 May, 12 June 2019). The Olaroz project is planned to be drilled for the first time in LKE’s 100% owned Olaroz leases as soon as drilling is completed at Cauchari. 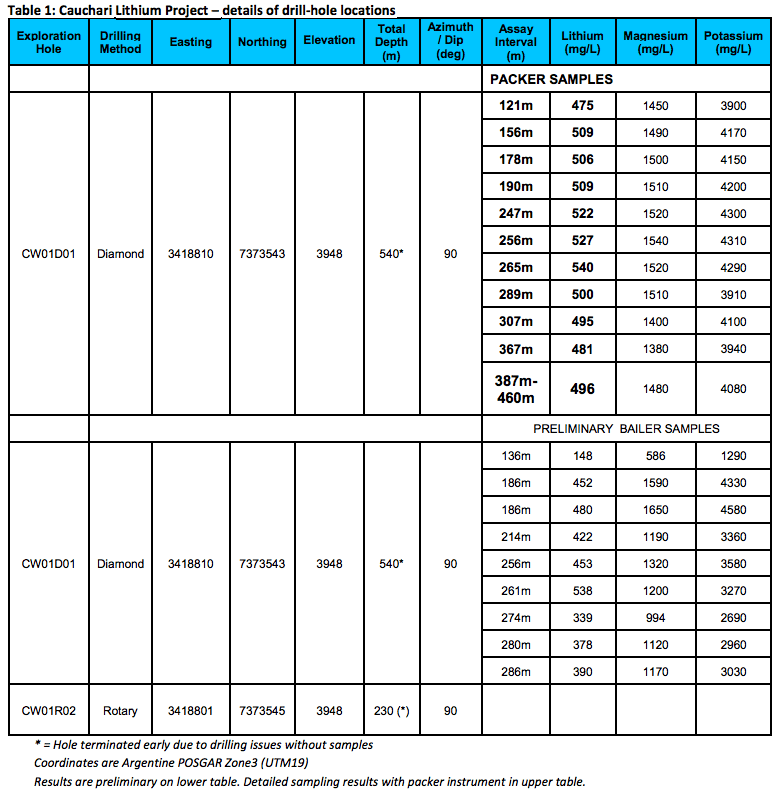 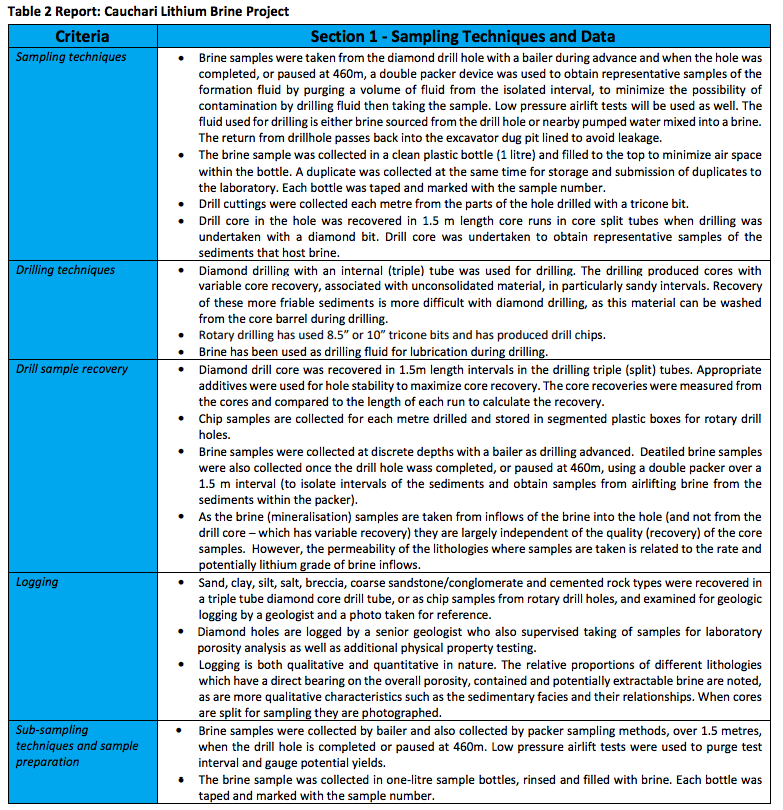 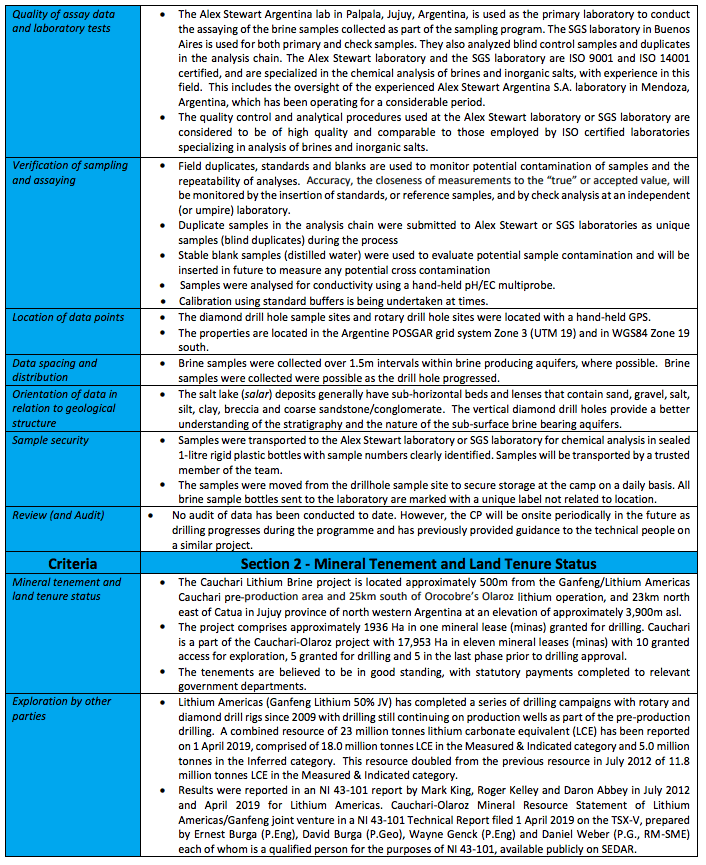 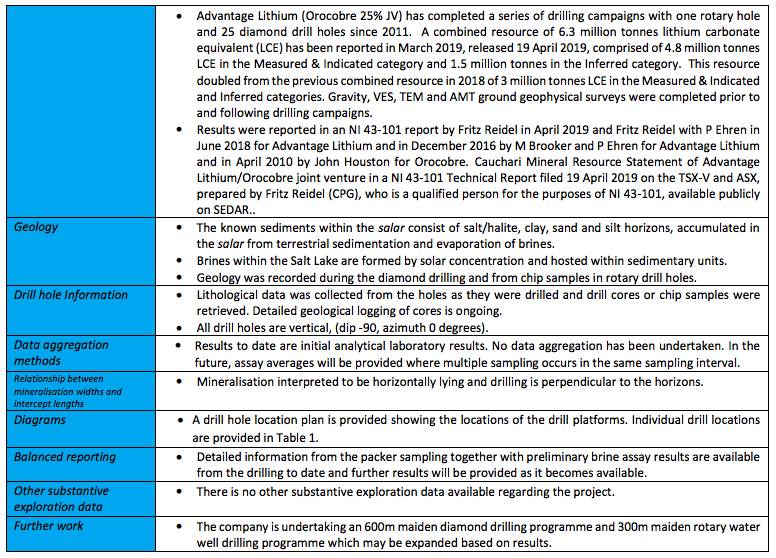