Joe Lowry of Global Lithium shares his thoughts on FMC’s recently released annual report and what it means for the company’s lithium business.

By: Joe Lowry
FMC’s (NYSE:FMC) annual report came in the mail this week. I read it with interest. FMC tells their shareholders (and anyone else who cares to read the document) “2015 was an important year for the lithium business” and they made “great progress” in strengthening their position. Interesting perspective.
One of the more curious items in the lithium section of FMC’s report is the chart stating they focus on “high value” specialty lithium products. They use the chart below to explain that the overall global lithium market volume is 71% industrial and only 29% specialty. They further state that overall market revenue is 43% industrial and 57% specialty – the impression being created is that the specialty sector is a “sweet spot” or “the place to be”. The final part of the chart shows that FMC’s revenue is only 21% in the industrial sector and 79% in the specialty sector. 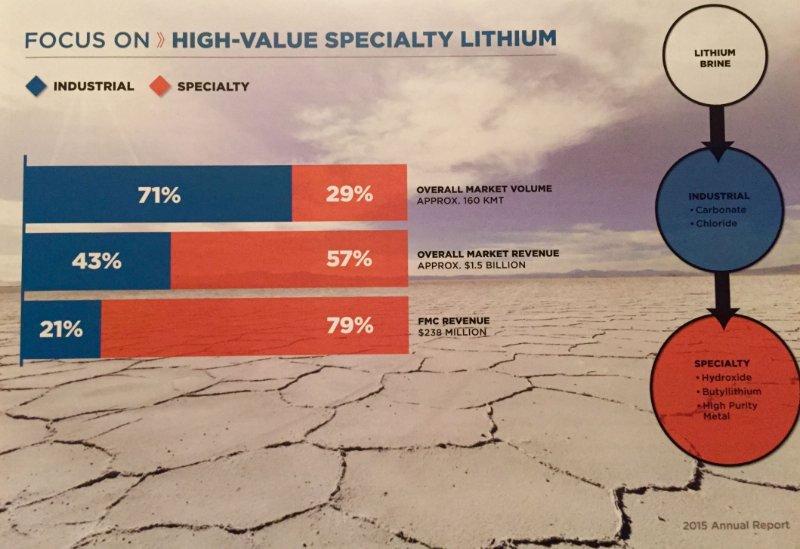 Wow – it should be a great thing that FMC’s lithium business is a full 79% in the “high value” specialty sector and only 21% in the industrial sector.
Just one small question for FMC: if your business is 79% “high value” specialty and you are #2 of the “Big 3” in revenue – why are you by far the least profitable “Big 3” lithium business???
Why do Albemarle (NYSE:ALB)/Rockwood and SQM (NYSE:SQM) make more profit in a quarter than FMC does in a year? There must be a logical answer…….
It also seems ironic that FMC has redefined hydroxide as a “downstream” business. Historically hydroxide was considered an upstream “primary” product. During the days that hydroxide was considered an upstream primary product, FMC was a much stronger force and often received a significant premium vs their competitors.
Today, FMC’s share position in the high end (battery) portion of hydroxide market, while still significant, continues to erode. When capacity declines in a growing market; there is only one direction your market share can go. FMC still likes to think of itself as number one in hydroxide yet three companies in China that were not factors in the market five years ago now have more hydroxide capacity than FMC.
Tesla’s supply chain has to rely on China for incremental lithium supply because they certainly can’t rely on a company who is not expanding capacity. Talk about “throughput” increases sounds good (see below) but means next to nothing to customers in a fast growing market.

The bottom line is that even with a 10% increase in 2016, FMC will still be producing less hydroxide than they were just a few years ago. In an era where hydroxide is in a global period of undersupply and prices are triple last year in some markets –it would be wonderful if FMC could state they had record production but unfortunately they do not and prefer to highlight incremental year over year increases.
There is some undisputed good news in FMC’s lithium story. Of the “Big 3” — FMC will realize the largest upstream price increases in 2016. FMC has a tiny share of the carbonate market and is able to sell in the highest price niches. Like most people in the industry, I consider hydroxide an upstream product – especially since it is a first product in the process the Chinese use. FMC still has a good position in hydroxide despite losing share each year to China and ceding share for Tesla cathode demand. Given FMC’s limited profitability – they should be able to double profits (and get back to historic highs) in 2016. I am not sure a return to profitability levels of the last decade is a victory especially when carbonate and hydroxide global average prices are more than double what they were then. It seems “great progress” has multiple definitions.
In recent days ALB has confirmed their intention to more than double their capacity and SQM has entered a JV with Lithium Americas to bring an additional 40,000 MT of capacity online in Argentina in the coming years. We don’t hear any talk of meaningful expansion from FMC.
In what management likes to call “The New FMC” the position of lithium in the FMC portfolio has been greatly diminished. I kind of liked it better when FMC truly was a leader in the lithium market. Although still a member of the legacy “Big 3” – when “The New Lithium World Order” is considered FMC would likely be considered at best #4 and more likely #5 globally with the emergence of companies like Sichuan Tianqi and Ganfeng in China.
Don’t forget to follow us @INN_Lithium for more updates!

Editorial Disclosure: Joe Lowry was employed by FMC from 1989 to 2012. His most recent title was Global Sales and Business Development Director — Lithium.
After more than two decades with a major lithium producer holding senior leadership positions at lithium operations in the US, Japan and China; Mr. Lowry formed Global Lithium LLC – an advisory firm that works with lithium producers, users, investors, hedge funds and governments on four continents. He has an extensive network of contacts with the leadership of the world’s leading lithium suppliers and users. His knowledge of lithium supply and demand, pricing, the lithium ion battery market and industry trends enables him to provide unique insights into the world of lithium.
Originally published by Joe Lowry on April 1, 2016 under the title “FMC — The Rest of the Story.” Click here to view the original article.