The former just published a preliminary economic assessment (PEA) for its Albany graphite project in Ontario, while the latter recently put out a feasibility study for its Mozambique-based Balama project.

Jaberwock also provides a chart that outlines capex for companies that have put out economic valuations for graphite mines. It is as follows: 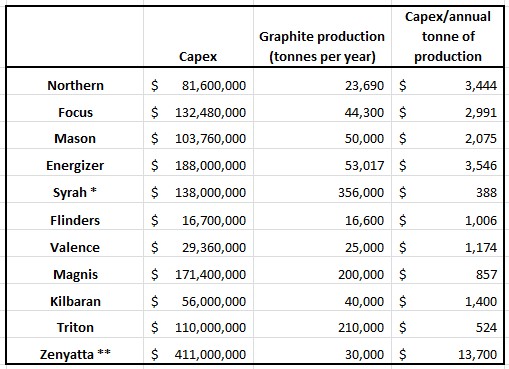 I have reviewed Zenyatta in an earlier article, and the PEA results have confirmed what I suspected. Zenyatta’s Albany mine will be extremely expensive to develop, and will have the highest operating costs in the business.

In spite of the high costs, Zenyatta has estimated a positive Net Present Value (NPV10) of $438 million (after tax) based on an open pit mine, with a 22 year mine life. IRR is 24%. They are able to achieve those figures by assuming an average selling price of $7,500/tonne for the purified graphite.

There is no commodity exchange for graphite, and there are hundreds of different products, each with its own specification. Trading is mostly done directly between mines and processors or end-users on a contract basis and prices are usually confidential. It is difficult therefore to find definitive data to verify these price assumptions. However, I have reason to believe the company has taken an overly optimistic view of market prices for their product. As an example, I look at the battery grade pricing quoted in the study ($4,000 to $20,000/tonne, average $12,000/tonne). Current prices are around $4,000/tonne for uncoated spheroidized natural graphite for li-ion batteries. Zenyatta’s natural graphite would need to be upgraded to 99.5%, and spheroidized to meet the specification for the $4,000/tonne material, so it is unlikely that it could be sold into the li-ion battery market at anywhere close to the assumed price.

Because of the high cost relative to competing mines, and high degree of uncertainty surrounding pricing assumptions, financing the Albany project will be very difficult in today’s market.

Syrah is the most advanced of the potential new graphite producers, having started pre-construction work and having obtained all but one of the permits required to complete the project. However, the advanced state of the project is fully reflected in the share price and $500+ million market cap.

As I mentioned in my previous article, other companies, such as Triton Minerals and Magnis Resources (OTC:URNXF), have similar projects in Africa, also with take-off agreements and attractive economic evaluations, and have much lower market caps. These companies appear to better value than Syrah.

However, in spite of the high market cap, I still rank Syrah as a speculative near term investment opportunity, because of the potential for upcoming catalysts to give the share price a boost. These catalysts would be:

Conversely, there is downside risk if the critical agreement with Asmelt fails to materialize.