A newly developed technology in cobalt processing is planned to be applied in the world’s largest deposits of the Democratic Republic of Congo. Alexander Mining plc is planning to start a pilot project processing cobalt with its Ammleach technology at the Anvil Mining Ltd.-owned Mutoshi deposit in the Katanga province. 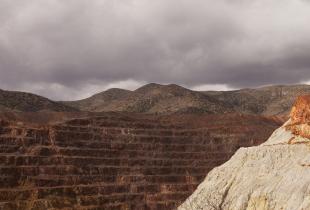 A newly developed technology in cobalt processing is planned to be applied in the world’s largest deposits in the Democratic Republic of Congo. Alexander Mining Plc is planning to start a pilot project processing cobalt with its Ammleach technology at the Anvil Mining Ltd.-owned Mutoshi deposit in the Katanga province.

“This process will have strategic implications in this region if it demonstrated successfully – as we strongly believe it will be,” said Martin Rosser, Chief Executive Officer of Alexander Mining. “The economics of extracting cobalt and also copper in that part of the world is a big opportunity.”

Ammleach – short for “ammonium leaching” – was first applied by Alexander Mining at a copper-oxide project in Argentina, where conventional sulfur-acid leaching was not a practical and lucrative option.

“This copper-oxide deposit had challenging minerality, which meant that the conventional acid leaching process wasn’t going to be technically or economically viable,” said Rosser. “So we started to investigate alternatives, and that’s how this technology was invented, and subsequently developed.”

Rosser explained that the difference between Ammleach and the conventional acid leaching lies largely in the amount of reagent needed to extract cobalt from ore. Acid leaching requires a large amount of reagent, close to 100 kg or more per ton, while Ammleach needs much less, somewhere between 3-5 kg per ton. Further, the ammonia in the Ammleach process can be reused, while acid is consumed in the process and brings impurities through the leach solution which must be removed in a cleanup circuit.

“The main advantage is driven by the economics,” said Rosser. “High acid consumption is obviously a significant cost that has to be borne by the operation. The ammonia is recycled in the process rather than being consumed by the rock as it would be with acid.”

Rosser says the Ammleach process is particularly effective in on carbonate ore, which is the majority of what is found in the African Copperbelt. Current projects in the region are mainly focused on high-grade (2-3% copper with cobalt), which is typically extracted using agitated leaching.

“We see a significant opportunity – which is where our demonstration project fits in to the bigger picture,” said Rosser. “The so-called lower grade material, the oxide material, which is, say, 1-2 percent copper, has not been the priority for these foreign companies because they’ve been attracted – with the available technology – to the higher grade material.”

This process could soon be used to extract cobalt in the DRC, though Rosser says that because there are currently “deliberations regarding engineering decisions and timelines,” no date has yet been set for the plant to begin operation. Although Rosser says the Ammleach technology is very similar to current production techniques and uses the same processing equipment, the cobalt mining industry is by nature quite conservative and reluctant to adopt new technology, which emphasizes the importance of a demonstration project.

“The proof of the pudding is in the eating, so that’s how we see things building significantly from the first stage of the demonstration project to other places adopting the technology,” said Rosser.